Train 301 was in a bad spot when engineer Andrew Dockrell and his crew climbed into the cab of the locomotive just before 1 a.m. on Feb. 4.

The Canadian Pacific Railway Ltd. grain train, stretching more than two kilometres, sat on a main line and was pointed down a mountain. Mr. Dockrell had relieved a crew that halted the train because it exceeded the speed limit going down the steep mountain tracks west of the Great Divide near the Alberta-B.C. boundary.

There were no handbrakes set on any of the train’s 112 cars when Mr. Dockrell took over Train 301, which had sat for almost two hours in temperatures that dipped below -22 C on the snowy mountain, conditions known to reduce the effectiveness of an air-brake system.

According to investigators and people familiar with the events leading to the disaster, the three-man crew received no instructions to depart, and took no actions before the train began rolling away on its own.

Train 301 went through the spiral tunnel and quickly gathered speed as the tracks straightened, exceeding the 32-kilometre-an-hour limit as it ran down the mountain. The crew called out their speed on the radio more than once, notifying the dispatcher that they were out of control and warning that the tracks below should be cleared.

The lead locomotive derailed 3.2 kilometres down the mountain at a curve on a bridge and plunged more than 200 feet below into the Kicking Horse River.

Mr. Dockrell, conductor Dylan Paradis and trainee Daniel Waldenberger-Bulmer died in the derailment, which is the focus of several investigations by federal departments and Calgary-based CP.

The Globe and Mail pieced together this account of Train 301’s final run in interviews with several people who were granted anonymity because they are not authorized to speak publicly on the matter. CP and the federal investigator, the Transportation Safety Board, declined to comment for this story. The TSB is working to figure out what led to the derailment of Train 301. Questions raised by the incident include those surrounding rail-car brake technology and industry policy.

The runaway bears similarities to the 2013 oil-train disaster that killed 47 people in Lac-Mégantic, Que. In that case, a Montreal, Maine and Atlantic oil train rolled into the town, derailed and exploded after being left unattended with an insufficient number of handbrakes applied.

The Train 301 crash raises new questions about the government’s approach to rail safety and railway operating rules. Canada’s federally governed railways operate under three sets of regulations: federal laws and regulations; the company’s own rules; and a third, a set of broad operating principles and policies known as a Safety Management System written by the railway, okayed by Ottawa and withheld from the public.

Rail carriers “are in large part self-regulating, theoretically subject to oversight by Transport Canada. But they are, in large part, setting their own rules,” Prof. Winfield said. The Safety Management System is "very non-transparent. Nobody can see what’s in those plans.”

After Lac-Mégantic, Transport Canada phased out older tank cars and enacted new handbrake rules for parked trains, among other regulations.

There were no rules requiring that any handbrakes be set on CP’s Train 301. It was not unattended, and not parked. It was halted to recharge the air brakes, a standard procedure after an emergency stop. CP’s operating instructions left the decision to apply handbrakes to employee discretion based on weather and operating conditions, according to a 2006 company document.

When a train’s emergency air brakes are applied, the locomotive is automatically placed in idle and the supplementary, dynamic brakes are effectively bypassed while the air-brake system to the cars is recharged. This means Mr. Dockrell likely had no way to slow the train when it began to roll downhill, sources said.

The track that Train 301 plunged down is known as Field Hill, and is part of CP’s main line between Calgary and Vancouver. The mountainous stretch features some of the steepest grades and tightest turns in North America. Each day, about 24 trains a day crawl up and down the grades and through the spiral tunnels and rock-slide sheds, hauling everything from oil and potash to chemicals and containers.

It was the site of a derailment in January, as well as a runaway train in 1997. In that case, three crew members survived when 66 rail cars derailed in an out-of-control descent blamed on a depleted air-brake system and driver errors. The locomotive reached speeds of 80 km/h as the cars behind it flew off the tracks, but made it to Field, B.C. without crashing.

Days after the fatal derailment of Train 301 on the same hill, CP issued new operating rules for trains forced to make emergency stops on mountain gradients, requiring employees to set handbrakes on 25 cars, and that the air brake on every car be partly set by hand. Handbrakes must be set on all cars on trains that make their second emergency stop, the operating bulletin says.

Transport Canada on Friday issued similar regulations for all railways.

Setting handbrakes on rail cars is a slow task that requires great physical strength. After making the emergency stop, the first crew on Train 301 manually set the air-brake retainers − not the handbrakes − on three-quarters of the cars to apply a light braking force, a safety measure that is vulnerable to the same leakage problems that can beset the entire air-brake system.

Mr. Dockrell, Mr. Paradis and Mr. Waldenberger-Bulmer were waiting at the bunkhouse at Field, a trackside station at which CP crews rest, eat and await their next assignment. Typically, the three would drive an eastbound train back to their base in Calgary.

Instead, they were called to take over Train 301. The three railroaders got into a contractor’s van and were driven a short distance to Yoho, B.C., a station with road access to the railway. From there, a track-clearing machine known as a snow fighter carried them up the tracks to Train 301, where they met the crew they were replacing.

As is CP protocol, the two crews and a manager down the mountain at Yoho held briefings, discussing the train’s situation and whether additional brakes should be applied.

The first crew had thrown on the emergency brakes after exceeding the slope’s speed limit at about 11 p.m. Sunday night. They were near their maximum permitted hours on duty and had to be relieved on the mountain instead of at the Field station.

The Globe has been unable to find a reason the train sat for two hours blocking CP’s main line in the frigid weather. One source said there had been a power failure at the Field bunkhouse, and speculated that this delayed the notice and handover to Mr. Dockrell’s crew. 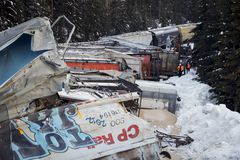 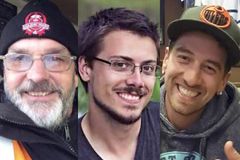 Derailed train in B.C. began to move on its own, investigators say
February 6, 2019