H&R Real Estate Investment Trust is unloading its ownership in the Bow, Calgary’s signature office tower and once the pride of Encana Corp., in a multifaceted deal designed to decrease its exposure to the city’s troubled office market and slash its debt burden.

H&R, which owns a mix of office, industrial, residential and retail properties, is selling the Bow along with an office complex in Mississauga to two parties, Oak Street Real Estate Capital and Deutsche Bank Credit Solutions and Direct Lending. The REIT plans to use some of the roughly $800-million in net cash proceeds to repay corporate debt.

Both the Bow and H&R’s debt load have weighed on the REIT’s unit price, prompting speculation that management would try to sell at least part of its stake in the crescent-shaped skyscraper. On a conference call Tuesday, chief executive Tom Hofstedter said the deal addresses “significant points of concern” for unitholders.

Once the deal closes, H&R’s exposure to the Calgary office market will be reduced to 3 per cent of its total portfolio, down from 9 per cent, based on fair market values. The transaction also reduces H&R’s exposure to Encana, which was recently renamed Ovintiv Inc., as the gas producer’s rent will constitute just 2 per cent of H&R’s total revenue, down from 12 per cent.

As part of the complex deal, H&R will retain a 15-per-cent exposure to Ovintiv’s lease payments in the Bow, which are fixed until 2038 under a long-term contract that was signed when the building was under construction.

The deal illustrates the extent to which Calgary’s business environment has changed over the past decade. When plans to build the Bow were conceived by Encana before the 2008 financial crisis, the hope was that the tower would stand as a testament to the company’s and the city’s world-class status. Foster + Partners, the elite architectural firm behind London’s Gherkin, was commissioned to design the skyscraper.

Today, Calgary’s downtown office vacancy rate is 33 per cent, according to CBRE, and global energy giants have been selling their stakes in Canadian energy assets for years. Ovintiv has also suffered from almost a decade of financial woes, and the company relocated its head office to Denver in early 2020.

On the conference call, Mr. Hofstedter said H&R’s ownership of the Bow was “something investors have focused on as a key risk.”

While the REIT will be able to use the cash proceeds to repay debt, it had to sell the building at a roughly 8-per-cent capitalization rate. Much like bond yields, the higher the capitalization rate, the riskier the asset – and the lower the price. By way of comparison, residential apartment buildings in the Greater Toronto Area have been selling at capitalization rates of about 2 per cent over the past year.

The deal is worth a total of $1.67-billion, and H&R’s remaining 15-per-cent stake in the Ovintiv lease has been valued at $206-million.

Should the Calgary market rebound, the deal gives H&R with the right to repurchase the land and building of the Bow once the Ovintiv lease expires in May, 2038, for $735-million. 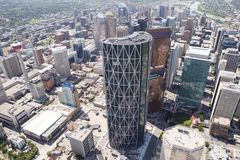