Hudson’s Bay Co. urged shareholders to continue supporting a proposed $1.1-billion buyout of the department-store chain and poked holes on Friday in a private-equity fund’s campaign against the planned takeover.

HBC, owner of retailers Saks Fifth Avenue and Hudson’s Bay, agreed in mid-October to a sweetened offer for the company from a group led by chairman Richard Baker. Late Thursday, Catalyst Capital Group Inc. claimed shareholders owning 28.24 per cent of HBC opposed the bid, which represented enough votes to block Mr. Baker and his backers. However, Catalyst controls only 17.5 per cent of HBC, so it cannot stop the buyout on its own, and the Toronto-based asset manager did not name other investors who are against the offer.

Brampton, Ont.-based HBC said on Friday that the special committee of its board continues to endorse the $10.30-a-share bid from Mr. Baker’s consortium ahead of a shareholder vote scheduled for Dec. 17. In a news release, HBC said: “Based on the extensive analysis of independent, internationally recognized financial and real estate experts, the special committee believes this offer accurately reflects the company’s expected performance due to the continued investment required at HBC, the deteriorating retail environment and the current market valuation of the company’s real estate assets.”

While Catalyst’s news release said 28.24 per cent of HBC shareholders oppose the offer from Mr. Baker’s group, the fund manager’s filing with securities regulators on Thursday was less definitive. In the filing, Catalyst partner Gabriel de Alba said: “Catalyst believes that it and other shareholders of the issuer, who taken together are believed to beneficially own or exercise control or direction over approximately 28.24 per cent of the issued and outstanding common shares, will oppose the insider issuer bid.”

Long-time HBC shareholder Land & Buildings Investment Management LLC dismissed Mr. Baker’s opening $9.45-a-share offer for HBC in August as inadequate, but has yet to state its view on the improved bid and declined to comment on Friday.

In making his case against the buyout, Mr. de Alba highlighted what he called “massive tax leakage” facing HBC investors. The structure of the offer hasn’t changed since August, when Catalyst began to build its stake in HBC. The retailer previously warned shareholders that the bid carried significant negative tax implications for certain types of investors. Catalyst manages approximately $4-billion for pension funds, foundations and wealthy individuals.

Large takeovers traditionally play out with sparring between buyers such as Mr. Baker, who want to pay as little as possible for a business, and minority shareholders, such as hedge funds that use all their corporate skills to push for the highest price. The backdrop to the battle for HBC is continued struggles at department-store chains in the face of relentless competition from digital platforms such as Amazon.com Inc. If Mr. Baker’s group fails to buy the company, HBC shares are expected to return to $6 levels, where they traded prior to the opening bid.

Over the past five years, HBC said the average price of shares in its peers declined by 51 per cent, as sales fell by 4 per cent annually. Since Mr. Baker first bid for HBC in August, rival Barneys of New York filed for bankruptcy after failing to attract a buyer. HBC’s most recent financial results showed that the company lost $709-million in the past six months, on sales of $3.7-billion. 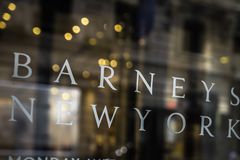