A major U.S. shipping line has ceased calling on the jammed Port of Halifax. A car dealer in St. John’s faces angry customers because new vehicles got stuck somewhere in mid-transit.

Stocks of products from major food brands are thinning on grocery shelves on Vancouver Island. And a chicken producer worries about the fate of chicks once propane used for heating runs out.

Such anecdotes are cropping up as a series of protests disrupts transportation networks throughout Canada. Business and trade associations told The Globe and Mail the blockade of the Canadian National Railway main line east of Belleville, Ont., now in its third week, has had by far the greatest impact.

“That location is a real key area because the CN main line between Montreal [and] Toronto is so important in terms of connections from the ports of Halifax and Montreal, through to Chicago and, of course, Western Canada,” said Bob Ballantyne, president of the Freight Management Association of Canada.

In a commentary published Friday, Royal Bank of Canada economists Nathan Janzen and Josh Nye predicted the blockades’ overall impact is likely to be muted. They estimated Canada’s GDP growth for the first quarter of 2020 will be reduced by about 0.2 percentage points, relative to a previous forecast of 1.4 per cent, but that the blockades’ negative impact would largely be reversed later in the year. “A count of idled train cars shows activity bounced back immediately" after a week-long strike by CN Rail workers in November, they added.

But while most Canadians have yet to be directly affected by the blockades, organizations representing businesses closer to Canada’s myriad supply chains anticipate increasing layoffs and shortages of consumer goods should the situation persist for much longer.

Dan Kelly, president of the Canadian Federation of Independent Business, said his organization received thousands of responses from a survey last week. Although members in the natural resources, transportation and agricultural sectors were among the earliest to feel an impact, the effects have now spread to the rest of the organization’s membership.

“Members were gritting their teeth for the first few days,” he said. “But now we’ve got business owners who are absolutely freaking out.”

The Shipping Federation of Canada, which represents owners and operators of ships that call on Canadian ports, said backlogs are occurring at all major ports, although to varying degrees.

Containers are piling up at the Port of Halifax, which is served exclusively by CN Rail. “We’ve already heard of one container carrier that has decided to drop their Halifax port call; they’re just going straight to Baltimore and New York to unload,” said Karen Kancens, the federation’s vice-president. Although the Port of Montreal is also served by CP Rail, it is also highly congested.

Containers unloaded at Vancouver are still able to be transported as far east as Toronto, Ms. Kancens said. Even so, more ships than usual have been waiting at anchor offshore.

“Each of the ports has a tipping point where they won’t be able to handle any more containers,” Ms. Kancens said. “It’s difficult to say what that point is, but it’s approaching.”

Mr. Ballantyne said large retailers are beginning to feel the effects. “They’re having containers that are either stacked up at the ports and can’t be moved, or they’re stuck someplace en route.” Although reports of disruptions have arisen from coast to coast, “Quebec and the Atlantic provinces are the ones that are far and away the most vulnerable."

Gary Sands, senior vice-president of public policy at the Canadian Federation of Independent Grocers, said grocery chains in Western Canada are already experiencing shortages, particularly in perishable foods. “There are bigger independents who are also wholesalers and distributors who are telling me that within three or four days, there’s going to be a lot of shortages," he said.

Quality Foods operates 13 grocery stores on Vancouver Island. Vice-president Justin Schley said while the chain isn’t out of stock of anything yet, orders from major food vendors that manufacture east of Toronto have been delayed. “Most of what we get is shipped from Toronto and east of there, and being on Vancouver Island, we’re last on the list,” he said. He predicted customers wouldn’t likely experience shortages for a couple of weeks.

Maéva Proteau, a spokeswoman for federal Finance Minister Bill Morneau, said the Finance Department is monitoring the economic effects of the blockades. She cited the impact on supply lines, workers who use the rail system to commute and workers whose jobs depend on the rail network.

Even if the blockades ceased immediately, experts said the disruptions would echo for weeks. “Railway folks will tell you that for every day service is stopped, it takes about three or four days to recover," Mr. Ballantyne said. “They’re looking certainly well into March before things would get back to normal.” 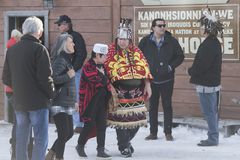 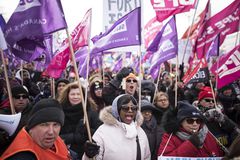