China, the global heartland of socialist capitalism, is now declaring itself an adherent of something new: Communist Party-run fiscal conservatism.

With the country’s economy slowing, Premier Li Keqiang, one of China’s most powerful figures, described a plan that wouldn’t look out of place in a playbook from the political right: cutting taxes, rejecting big stimulus and constraining state spending.

The latter, in particular, will be “like turning a blade of the knife on the government itself.” It’s a change “that requires exceptional courage and determination,” Mr. Li said during an annual news conference, while promising that “the tax burden levied on companies will only go down instead of increasing.” The moves will deliver a $400-billion boost to corporations, he pledged, and is a “very important measure in countering downward pressure.”

Even on the issue of privacy, Mr. Li took a decidedly small-government posture. China has been accused of spying around the world. But the country, Mr. Li said in response to a question related to global concerns about tech giant Huawei, does not ask companies to spy on its behalf.

“This is not how China behaves,” he said. “We have not done that. And will not do that in the future.”

A corporate-friendly tone is not new to China, which last year marked the 40th anniversary of reform and opening up − the massive transformation of its economy achieved in part by opening the space for private commerce.

But the stakes have risen for China’s leadership, which is struggling to reach a deal with the Donald Trump administration on trade-related issues even as it seeks to arrest a domestic slowdown. The decline comes amid indicators that the long-time juggernaut of the world economy is at risk of listing.

“These days, I can’t imagine anyone in China really believes that the situation is getting better. Both investor and consumer confidence is decreasing,” said Wang Fuzhong, a scholar at the Central University of Finance and Economics.

And ”the pressures caused by the economic downturn, and the hardship that is creating, have turned out to be larger than the government initially imagined. That’s why China is taking these sorts of measures to save the economy.”

Mr. Li described a series of actions China intends to take, including cutting the rate of value-added taxes (beginning April 1), reducing requirements for local social-insurance contributions (beginning May 1) and continuing to ease reserve rate requirements and interest rates – all tools designed “to provide effective support to the real economy,” he said.

China is aiming for GDP growth of 6 per cent to 6.5 per cent in the year ahead, and “I have confidence that China’s economy will remain an anchor of stability for the global economy,” Mr. Li said.

But the Chinese state itself must adjust to changing circumstances, he said. “The government is going to tighten its belt. The government will further cut back on its general expenditures,” he said.

There are, however, limits to the changes China’s leadership is willing to countenance.

Mr. Li himself acknowledged that the Chinese government will absorb half of the $400-billion decline in revenues by leaning on its vast state holdings, which have been buttressed under President Xi Jinping. “The central government will ask designated financial institutions and some enterprises directly under the central government to turn in a larger share of their profits to the state coffers,” he said. Beijing “will also take back those fiscal funds that have long stayed unused.”

He did not define what that could be.

As for cutbacks, likely targets for government trims are receptions, vehicles and overseas trips, said Zhao Xijun, deputy head of the school of finance at Renmin University.

The Chinese government has pledged to leave untouched spending ”that directly affects people’s quality of life, such as social security, employment and medical care,” he said. “So the only thing left to cut is the government’s own expenditures.”

He called it “a countermeasure taken by government in a special time.”

It’s not clear how the Chinese government could manage to find $200-billion in annual savings − an amount equal to 60 per cent of Canada’s federal budget.

Even so, the mere mention of austerity signals a shift in China, where the leadership appears determined not to repeat past policies of stoking growth through spending − and, as a result, incurring deeper debt.

“When a decrease in revenue becomes inevitable, the government knows it has to do away with old habits of extravagant consumption. It’s a must and it’s good for our economy,” said Xu Mingqi, a researcher at the World Economic Research Institute with the Shanghai Academy of Social Sciences.

Just look at the United States, Mr. Xu said: “Trump reduced taxes, and that was considered beneficial and effective for the U.S. economy.” 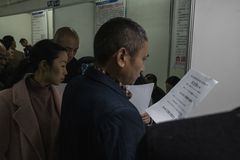 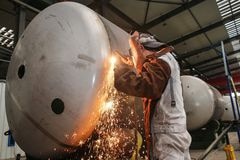 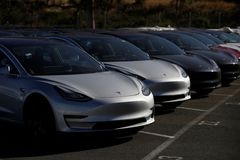