As the COVID-19 pandemic unfolded last spring, Thomas Madden figured it was time to hire a public relations firm.

For years the low-profile Vancouver biotechnology company he runs, Acuitas Therapeutics, had worked in an emerging field of therapies called “messenger RNA” (MRNA). Acuitas’ technology, a delivery system for MRNA drugs, would prove to be a critical piece of three COVID-19 vaccine projects, including one approved by the United Kingdom on Wednesday developed by Pfizer Inc. and BioNTech SE.

“As a private company we’d elected to remain under the radar,” Dr. Madden, Acuitas’ founder and CEO, said in an interview. “When we were involved in the development of COVID-19 vaccines … we thought it was important to let people know that a Canadian company and Canadian technology was playing a critical role.”

With Canada’s biotechnology industry enjoying a record year for fundraising, perhaps the most successful company is Acuitas. But while AbCellera Biologics Inc., another Vancouver firm, prepares to go public on the strength of its own partnership on another COVID-19 treatment, Mr. Madden says Acuitas won’t follow suit. Acuitas has operated prosperously for years with no outside funding, and he has no interest in changing that.

“There are two reasons to go public – to raise capital to invest in products or expand the business, or the shareholders want to see liquidity for their shares,” said Dr. Madden. “Neither of those reasons apply to us. We don’t need that liquidity and we don’t need external capital.”

Privately held Aquitas does not share financial results. But Dr. Madden revealed revenues amount to “more than tens of millions of dollars” annually. They have increased by about 75 per cent for the past few years and should continue to grow by at least that amount for the next two.

Acuitas’ technology, known as lipid nanoparticle, or LNP, is best described as a cross between a delivery driver, a bodyguard and a stager for MRNA drugs, which encompass many of the coronavirus vaccines.

MRNA is a molecule that brings instructions to the body’s cells to make a protein found in the novel coronavirus, which prompts the immune system to create a response to fight it.

But MRNA is fragile. It can’t survive the trip into the cells on its own; it needs LNP’s help. Dr. Madden likened MRNA to “a delicate ornament you buy online.” LNP functions to “package the ornament so it is protected in the journey. It would find your house, open your front door, let itself in and then unwrap the package so the ornament was ready.”

Acuitas has a messy backstory. Dr. Madden, 66, who emigrated to Canada from the U.K. four decades ago to do post-doctoral biochemistry work with University of British Columbia professor Pieter Cullis (now Acuitas chairman), cofounded a biotech startup called Inex Pharmaceuticals. But he was downsized after the company merged with another firm in the late 2000s to become Tekmira.

He and other ex-employees founded AlCana Technologies Ltd, the forerunner to Acuitas, in 2009. After a lawsuit between AlCana and Tekmira, his company secured the right to produce drug delivery technology licensed from their ex-employer as part of a settlement.

Acuitas worked with Moderna, another future COVID-19 vaccine developer through the 2010s until Tekmira, now called Arbutus Biopharma Corp., terminated Acuitas’ license. After another lawsuit, the parties settled in 2018. Acuitas and Moderna parted ways but Dr. Madden’s company had by then developed intellectual property to provide its own brand of LNP.

Dr. Madden said Acuitas’ business goes well beyond the pandemic; the profitable company has signed at least 10 deals with drug developers who license its technology in a range of therapeutic areas.

But he said the high profile use of LNP during the pandemic “provides clinical proofs of concept that the technology is extremely powerful and can be used to rapidly develop new vaccines.”

Dion Madsen, a partner with biotechnology venture capital firm Amplitude Venture Capital, said “we believe that RNA therapeutics and nanomedicines are an exciting approach that is really coming of age. We are looking a number of investments in the space.”

He said Canada has several companies with strengths in manufacturing and delivery, such as Acuitas and Precision Nanosystems, that could make them important to the maturity of this sector.

Didier Leconte, vice-president of investments, life sciences and funds of funds with Fonds de solidarité FTQ, one of Canada’s top biotech investors, said the world has discovered that companies in the forefront of vaccine developments against COVID-19 “kind of rely on Canadian company that has a unique expertise and know-how that helps with the formulation of mRNA vaccines.”

Explainer
Which COVID-19 vaccines are in development or approved for use in Canada? Here’s everything you need to know
December 29, 2020 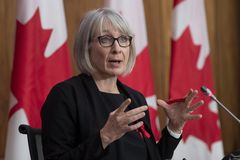