In Coleridge’s classic poem, the Ancient Mariner is burdened with a dead albatross, hung around his neck. At Inter Pipeline Ltd. , the albatross is a $4-billion refinery project that’s over budget and behind schedule, weighing down a utility that’s trying to fend off a hostile takeover bid.

Calgary-based Inter Pipeline announced late Thursday it is looking for a white knight bidder to ward off a $5.7-billion offer from Brookfield Infrastructure Partners LP , launched earlier this month. On Friday, analysts said Inter Pipeline is unlikely to find another buyer, and will be forced to cut the best possible deal with its unwanted suitor.

“We believe there is a low likelihood of a competing offer,” Scotia Capital analyst Robert Hope said in a report on Friday. “If a competing offer does not emerge, we believe Inter Pipeline will engage Brookfield to try to at least get a better offer.”

An executive at a rival utility said while Inter Pipeline owns an attractive network of pipelines that link Alberta’s oil sands to refineries, uncertainty around its planned Heartland Petrochemical Complex will keep rival bidders away. The Globe and Mail is not naming the executive because they are not authorized to speak about the deal.

In a conference call on Friday, Inter Pipeline chief executive Christian Bayle declined to comment on whether the company’s board is in talks with Brookfield Infrastructure or other potential bidders. He repeatedly said the board is considering “a broad range of options.”

Inter Pipeline became a takeover target after its share price fell by about 50 per cent last year, as oil and gas prices dropped and the company missed a self-imposed deadline for opening the Heartland facility, near Edmonton. The complex converts propane into plastic pellets, has been under construction for more than three years and was scheduled to open this year. Last spring, Inter Pipeline announced Heartland won’t be running until 2022 and boosted the cost of the project by $500-million.

Brookfield Infrastructure currently owns securities that amount to a 19.65-per-cent stake in Inter Pipeline and approached the company’s board last fall with an offer of $17 to $18.25 per share. After being rebuffed, Brookfield Infrastructure went public this month with a bid of $16.50 per share. Inter Pipeline stock closed Friday at $17.91 on the Toronto Stock Exchange, indicating investors currently expect a higher offer for the company.

Inter Pipeline responded this week by appointing a special committee of the board to consider all strategic options, including sale of the company and continuing a search for a partner in Heartland. Margaret McKenzie, who chairs Inter Pipeline’s audit committee and was previously a founder of Range Royalty Management Ltd., is leading the team. TD Securities and J.P. Morgan are advising Inter Pipeline, while BMO Capital Markets and Barclays are working for Brookfield Infrastructure.

Investment bankers said a suitor such as Brookfield Infrastructure, part of Toronto-based Brookfield Asset Management Inc., has private equity specialists who can take on a project such as Heartland, which is expertise that doesn’t exist at other Canadian pipeline companies. These bankers said Inter Pipeline is expected to reach out to financial players such as domestic pension plans, KKR & Co. Inc. and Berkshire Hathaway as it tries to entice a better bid.

“We view the likelihood of a competing offer as low, which suggests risk that no transaction materializes and Inter Pipeline continues to progress Heartland on its own,” said analyst John Bereznicki at Canaccord Genuity Capital Markets. “We continue to believe Brookfield could increase its preliminary offer of $16.50 per share, provided it can undertake comprehensive due diligence.”

Brookfield Infrastructure is expected to file a formal offer for Inter Pipeline later this month, kicking off a takeover process that is expected to play out within 105 days.

On Friday, Inter Pipeline reported its profit last year declined to $359-million from $539-million in 2019, a drop that reflected weak commodity prices and $1.1-billion of capital spending. Last November, Inter Pipe sold a portion of its European oil storage division for £420-million as part of a strategy to streamline operations and pay for projects such as the Heartland facility. 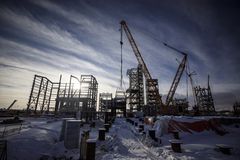 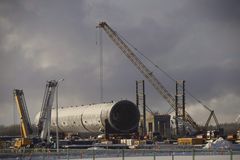