Canadian internet users could be left with fewer choices and higher prices if independent providers, which are facing rising costs stemming from the COVID-19 pandemic, close up shop, consumer advocates say.

Independent internet service providers (ISPs), which pay for access to networks owned by the large telecom companies, have had to purchase more network capacity as Canadians have been gobbling up bandwidth while working, learning and entertaining themselves from home.

That additional network capacity comes at what the independent ISPs call inflated rates. Last August, the Canadian Radio-television and Telecommunications Commission (CRTC) lowered the rates that Canada’s large phone and cable companies can charge third-party providers, but the change has not come into effect due to legal appeals.

The large providers have said the new rates are so low, they would have to reconsider some of their planned network investments.

Independent ISPs such as TekSavvy Solutions Inc., which were expecting a rate reduction, have now found themselves financially stretched. The Chatham, Ont.-based provider has laid off 130 staff, hiked its monthly rate by $5 and is calling on the CRTC for emergency relief.

Conservative MP Michelle Rempel Garner has also weighed in, urging Navdeep Bains, the Minister of Innovation, Science and Industry, to take action so that independent ISPs don’t shutter their businesses and cut off service to their customers amid the pandemic.

The situation poses a real threat to the state of Canada’s internet sector and could ultimately result in higher prices for consumers in the long term, says Michael Geist, who holds the Canada research chair in internet and e-commerce law at the University of Ottawa’s faculty of law.

“One of the real risks we face is that when we come out on the other side of this, some of the companies that the government and consumers have been depending on to inject increased competition into the marketplace are no more,” Mr. Geist said in an interview.

“Longer term, pricing and competitiveness in the sector depends on having more competitors, including independent competitors, in the marketplace,” he said.

Ms. Rempel Garner has proposed several remedies, including moving to flat-rate billing for the independent ISPs or requesting that the larger telecoms provide interest-free payment deferrals to those providers until the end of the public health crisis.

Matt Stein, who is CEO of Distributel Communications Ltd. and chairman of the Canadian Network Operators Consortium (CNOC), an industry group for independent ISPs, says larger telecom companies have been letting their own retail customers off the hook if financial hardship has befallen them. But wholesalers such as TekSavvy and Distributel are not being given that same flexibility, Mr. Stein said in an interview earlier this month.

“As we hit a new level of unemployment in Canada … customers are calling in droves saying ‘I’ve lost my job and I won’t be able to pay for internet,'" Mr. Stein said.

The current wholesale rates make it difficult for independent ISPs to offer payment deferrals to their own subscribers, Mr. Stein said. “These extremely high rates leave no buffer for us to interact with our customers in the way that we would like."

Véronique Simard, a spokeswoman for the Office of the Minister of Innovation, Science and Industry, said Mr. Bains and his team have been regularly engaging with telecom providers to ensure that they can continue to serve Canadians.

“Now more than ever, connectivity isn’t a luxury. It’s essential,” Ms. Simard said in an email. “Our government will continue to work to make sure Canadians can stay connected to their families and workplaces during this difficult time.”

TekSavvy and CNOC have also written to the CRTC expressing concerns that new installation and repair procedures implemented by larger providers have made it more difficult for independent ISPs to get service for their customers.

The large telecom companies said the new procedures – such as having technicians install service by feeding wire through a wall rather than entering a home – were made to protect the health of their own employees and all customers.

“The enhanced protections and process changes apply to both our retail and wholesale customers," Telus spokesman Richard Gilhooey said in an email, adding that the accusations contained in the independent ISPs’ letter are “categorically false.” 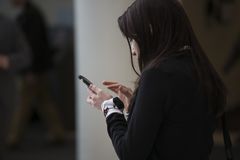