Amid a sea of people clad in white jerseys, suits and dresses, Brandon Klimenko hoists an inflatable Stanley Cup over his head, hoping it’s a sign of what’s to come for his beloved Winnipeg Jets hockey team.

“This is like a dream come true for a Winnipeg sports fan,” said Mr. Klimenko’s friend Jeff Pinchin, sporting head-to-toe white, including a white suit that matches Mr. Klimenko’s, white glasses and a white bowler hat. “We’ve been waiting for this and I just can’t believe it.”

The Winnipeg Jets National Hockey League playoff run has ignited a frenzy in the Prairie town, filling local bars and sparking downtown street parties that have attracted thousands of screaming spectators. They all dress in white, in a return of the “Winnipeg Whiteout” that dates to the original franchise’s 1987 playoff push against the Calgary Flames and their “C of red“ fans.

The Jets are the last Canadian team standing in the NHL playoffs, making them the lone franchise that can break the country’s 25-year championship drought. The club is locked in a battle in the best-of-seven conference final against the Vegas Golden Knights. Each team has won one game, with the winner moving on to the Stanley Cup Finals.

Either way, the excitement has already given Canada’s seventh-biggest city an investment boost.

“This is good economically for the city,” said University of Manitoba economics professor Ryan Compton, who teaches a course in sports economics. “When people across Canada see Winnipeg, they’re going to see that it’s a more dynamic place, see the community coming together; you see the excitement.”

Winnipeg, a city of about 700,000, didn’t always have something to cheer about when it comes to hockey. The original team, formed in 1972, was struggling to compete with bigger markets amid a weak Canadian dollar and rising player salaries in the 1990s. The Jets played their last game in 1996 before relocating to Arizona as the Phoenix Coyotes.

“I was at the very last whiteout ever as a little kid and being able to do it again now is just unbelievable,” Mr. Pinchin said. “One of my saddest memories as a child was losing the Jets.”

In the past decade, the city has made a push to attract more businesses, retain workers and revitalize its downtown. The return of the Jets in 2011 is part of the reason the city has seen increased investment in construction in the core. The playoff run is also boosting spending on eating and drinking establishments and attracting out-of-towners to the games, said Paul Ferley, assistant chief economist at Royal Bank of Canada. Longer-term, the exposure may help spur more investment, he said.

Manitoba’s economy wasn’t hit by the downturn in oil prices and has seen growth from a recovery in agriculture and manufacturing. Advanced manufacturing is Winnipeg’s largest industrial sector, representing 10 per cent of the city’s economy, according to Economic Development Winnipeg. Boeing Canada, bus maker NFI Group, Magellan Aerospace and packaging manufacturer Winpak Ltd. are among the companies operating in the city.

“It’ll be a significant add to growth,” said Mr. Ferley, a former Winnipegger. “It puts the city on radar screens for potential investors.”

True North Sports and Entertainment, whose partners include Mark Chipman and David Thomson, the billionaire chairman of Thomson Reuters Corp., brought the Jets back seven years ago by relocating a team from Atlanta.

That set the stage for the celebrations this year as the team made the playoffs for the second time since the move. Tens of thousands of fans now gather for each game near the Bell MTS Arena on Donald Street, where huge screens have been set up. Others gather in nearby bars like the Shark Club.

“I know a lot of people personally who were involved in the campaign to save the Jets and with it we kind of lost something we were really proud of,” said Paul Soubry, chief executive officer for NFI Group, formerly New Flyer, the Winnipeg-based transit bus manufacturer. “To see it now where it is and to see everybody walking down the street talking about it. Wow, that’s wonderful.”

Many companies such as NFI Group and Pollard Banknote Ltd. are getting into the spirit by encouraging employees to wear jerseys or white clothes on game days. Seeing Winnipeg rally behind its team will only elevate the city and possibly attract new business or people, Soubry said.

“It’s history,” said Teresa Giesbrecht, 58, sporting a glittering white bridal gown on the way to a game against Vegas. “It makes us stronger and we’re united.” 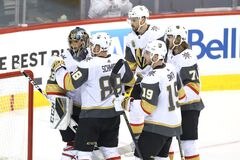 ‘Momentum’ will be key for remainder of Jets’ showdown with Knights
May 15, 2018 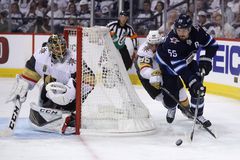