B.C. billionaire Jim Pattison is betting on an upswing in the forestry sector as he offers $981.7-million to take full control of lumber company Canfor Corp., a bid that sparked a rally in beaten-down share prices of Canfor and other Canadian producers.

Mr. Pattison, through Great Pacific Capital Corp., owns 51 per cent of Vancouver-based Canfor. Great Pacific announced late on Sunday that it is bidding $16 a share in cash for the 49 per cent of Canfor that it doesn’t already own.

The unsolicited offer to take Canfor private sent ripples across the lumber industry on Monday as Canfor shares surged 73 per cent to $15.26 on the Toronto Stock Exchange. Interfor Corp. saw its stock jump 7 per cent to $11.70; West Fraser Timber Co. Ltd. shares gained 4 per cent to $48.05; and Western Forest Products Inc. stock rose 4 per cent to $1.29.

“The bid shines a big light on Canadian lumber names, but how lasting that effect is will be interesting to see. I think the share prices will stay up this week and then probably drift lower unless something positive happens to lumber prices,” RBC Dominion Securities Inc. analyst Paul Quinn said in an interview.

Investors have taken notice because Mr. Pattison is “a long-term, strategic and very smart investor who sees value in this lumber space,” he said.

While investors welcomed Mr. Pattison’s bid, the Canadian lumber industry still faces uncertainty over exports to China and the pace of home building in the United States.

Russ Taylor, managing director at wood research firm Forest Economic Advisors Canada, doubts prices for spruce, lumber and fir (SPF) will stage a significant rally in the second half of 2019. “SPF lumber prices continue to languish near or below cost. This has continued to cause ongoing Canadian mill curtailments and some closures, mainly in B.C.,” Mr. Taylor said in an August report on wood markets.

But Mr. Pattison, who owns about 12 per cent of Vancouver-based West Fraser, has been a patient investor over the decades and says he stays calm during declines in commodity prices.

“You can control costs and production, but there’s no sense in worrying about something you can’t control," he said in an interview with The Globe and Mail in February, referring to the economic challenges faced by various industries. “Things will be okay. I’m not predicting anything except that I’m optimistic.”

He said it would be difficult to time when the lumber market might bottom. “There are double bottoms,” Mr. Pattison cautioned.

He added that consolidation isn’t necessarily the solution when an industry such as forestry is ailing: “When times are difficult, you try to cut your costs. It depends how much synergy you can get out of consolidation. In some cases, you might only get savings from the switchboard operator. Other times, you may save hundreds of millions of dollars.”

Mr. Pattison served on Canfor’s board from 2003 until 2017, when he stepped down as a director. He sat at the back of the room at the annual meeting that he attended in 2017, listening to brief tributes to him, including one from Canfor’s chief executive officer, Don Kayne.

RBC’s Mr. Quinn is skeptical that a higher bid will emerge for Canfor. West Fraser has the financial clout to mount a rival offer, but Canada’s Competition Bureau would likely intervene and B.C.'s NDP government would also frown on consolidation in a sector already reeling from mill closures across British Columbia, he said.

Last month, for example, Canfor announced the indefinite shutdown of its sawmill in Mackenzie, B.C.

Benchmark two-by-fours made from Western spruce, pine and fir sold recently for US$352 for 1,000 board feet, down 43 per cent compared with a record high of US$622 in June, 2018, industry newsletter Madison’s Lumber Reporter said.

Mr. Pattison serves as chairman and chief executive officer of Jim Pattison Group. He started with one car dealership in 1961 and now oversees a worldwide privately held conglomerate, doing business in more than 90 countries, surpassing $10.6-billion in revenue last year. Annual revenue is more than five times higher than two decades ago and the number of employees has exceeded 46,000 people, compared with 9,300 workers two decades ago.

Pattison Group’s holdings are diverse, including: Guinness World Records; Ripley’s Believe It or Not; Great Wolf Lodge; Sun-Rype fruit beverages; and the Save-On-Foods supermarket chain and other grocery stores. 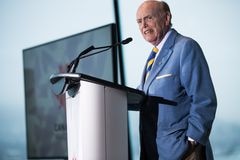 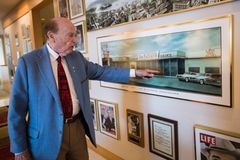