An outbreak at a Northern Alberta oil sands site is now linked to more than 100 COVID-19 cases across four provinces, including a remote Dene village in Northern Saskatchewan, further raising fears that the disease could spread like wildfire through work camps that house thousands of oil and gas workers.

Declared an essential service by the Alberta government, the oil sands have continued to operate throughout the COVID-19 pandemic, even as companies cut production because of tanking energy demand and historically low crude prices.

In mid-March, while the coronavirus that causes COVID-19 ripped around the world, companies that operate the fly-in, fly-out camps and lodges where workers live in close quarters ratcheted up efforts to keep the virus at bay.

Measures ranged from ending self-serve buffets in cafeterias to screening all guests, employees, contractors and suppliers coming on site. Meanwhile, oil companies introduced their own safety measures, including pretravel questionnaires and developing software to flag people who might be at risk before they boarded flights to remote facilities. Some reduced capacity on flights and buses to try to ensure physical distancing.

None of it stopped the spread of the virus.

Two days later, Kearl Lake had 12 cases. On May 8, the number surpassed 100, including 23 located beyond Alberta’s borders in British Columbia, Saskatchewan and Nova Scotia.

Workers had gone home, taking the virus with them.

At least three went back to the community of La Loche in Saskatchewan’s remote north. More than 130 people have since been infected with the contagion in the Dene village of 2,800 people, about 600 kilometres northwest of Saskatoon. Two have died.

In all, Saskatchewan’s far north health region had 179 cases as of Friday – a dozen more than the day before.

Saskatchewan Health Authority told The Globe and Mail that local contract tracing revealed Kearl Lake as a source of transmission to the region. As a result, it issued a precautionary advisory recommending that anyone returning from Northern Alberta should self-isolate for 14 days, and get tested if they show symptoms.

The outbreak is particularly concerning given that First Nation, Inuit and Métis communities face a higher risk of “severe outcomes” from COVID-19, given health care inequities, higher rates of underlying medical conditions and challenges of remote and fly-in communities, according to Canada’s Chief Public Health Officer Theresa Tam.

At least one worker who returned to Nova Scotia also took the virus home, as did 16 from British Columbia. Neither province will give details on where those cases are, citing patient privacy.

In B.C., health officials say they have been working with their Alberta counterparts to identify all workers who travelled to Kearl Lake. The severity of the outbreak also led the province’s health officer to order anybody who went to the Alberta oil sands camp after March 15 to self-isolate for 14 days upon their return home. A similar rule applies to anyone who returns to Nova Scotia from outside its borders.

He has spoken with Saskatchewan Premier Scott Moe and B.C. Premier John Horgan to keep them apprised of the situation, and said AHS has shared with other provincial health bodies the names and contact details of workers so proper tracing can be done.

Health officials work with their counterparts in other provinces to track cases and do the necessary contact tracing, as has been the case with the Kearl Lake outbreak.

Mr. Kenney said the province is “constantly learning" lessons about how to respond more quickly to prevent further outbreaks in camps, and is working with major oil sands employers to beef up response and safety measures.

That includes on-site AHS inspections for all oil sands work camps, with officials going over specific guidelines and making sure employers know what steps to take in case of an outbreak.

Before the Kearl Lake outbreak, camp operator Civeo enacted a range of infection control measures. Anyone who had travelled internationally was barred from accessing any Civeo facility for 14 days after their return, the company increased cleaning, and it came up with a quarantine and isolation plan for those who became ill. It did not return multiple requests for comment about whether it has increased safety measures since the outbreak.

In the case of Imperial, employees started getting prebagged lunches and in-room meal service after the outbreak was declared, and the company began providing masks or cloth face coverings to all workers, mandating their use onsite. It also implemented new 16-day shift rotations – rather than the usual 10 on, 10 off – to ensure workers leaving the site could isolate for two weeks.

The bulk of increased response measures in the oil sands are lessons Alberta’s provincial health body learned from Canada’s largest outbreak – the Cargill meat plant in High River, just south of Calgary. Roughly half of the slaughterhouse’s 2,000 employees have tested positive for the virus, with two deaths linked to the site.

In a bid to avoid such a massive outbreak at Kearl Lake, which has about 1,450 essential workers on site, AHS started a rapid testing program in conjunction with Imperial on April 22.

The oil company’s chief executive officer, Brad Corson, told investors during the company’s first-quarter earnings call recently that voluntary testing was available to all employees and contractors at Kearl, regardless of whether they were showing symptoms.

Alberta’s Chief Medical Officer of Health Deena Hinshaw said the testing program identified a number of cases where people had mild symptoms or none at all, which allowed the province to step up its contact tracing to make sure anyone at risk of exposure was identified and kept away from others.

Infection rates at the camp have since slowed but four cases were also identified at the Horizon oil sands site, operated by Canadian Natural Resources Ltd.

AHS says those cases don’t yet constitute an outbreak. That will only happen if there is evidence of epidemiologically linked transmission of five or more COVID-19 cases at the site.

Along with Alberta’s oil sand producers, other sites crucial to the energy sector have remained operating throughout the pandemic, albeit at a slowed rate.

As the province crawls toward a gradual reopening, provincial health directives guide the moves of every economic sector, including energy.

Scott Doherty, executive assistant to the national president at Unifor, which represents workers at various oil and gas sites across the country, said the response by companies to union safety concerns around the pandemic has been “excellent.”

And while workers continue to raise fears for their safety, particularly in camps, he’s pleased the feared cruise-ship scenario hasn’t materialized.

Western Canada: How an Alberta slaughterhouse turned into the country’s largest COVID-19 outbreak
May 2, 2020 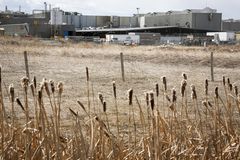 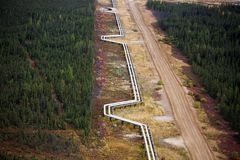 Coronavirus information
The Zero Canada Project provides resources to help you manage your health, your finances and your family life as Canada reopens.
Visit the hub
Follow Emma Graney on Twitter @EmmaLGraney
Report an error Editorial code of conduct
Due to technical reasons, we have temporarily removed commenting from our articles. We hope to have this fixed soon. Thank you for your patience. If you are looking to give feedback on our new site, please send it along to feedback@globeandmail.com. If you want to write a letter to the editor, please forward to letters@globeandmail.com.
Comments