Kinross Gold Corp. is eyeing a listing on the London Stock Exchange that could attract European investors who may be more comfortable than its North American base with the company’s considerable exposure to frontier markets.

Paul Rollinson, chief executive of Kinross, said in an interview that while the company has no current plans to list on the LSE, and hasn’t done a cost analysis yet, it will pay close attention to how fellow Canadian miner Yamana Gold Inc. fares with its upcoming listing on the London exchange.

“If there’s something there, we can be a fast follower, if at the margin it makes sense,” Mr. Rollinson said.

The elevated risk of operating in West Africa was highlighted last week when a military coup in Mali precipitated a selloff in miners with any exposure to the country. Kinross has no operations in Mali but it has a sizable mine in neighbouring Mauritania.

Mr. Rollinson conceded that European investors are more comfortable investing both in Africa and Russia than North American investors.

Over the past few months, as gold prices have hit record levels, a number of gold miners have either committed to, or mulled, seeking a listing in London, to try to capture a wider net of investors.

Toronto-based Yamana Gold, which trades on the Toronto Stock Exchange, said last month it was seeking a listing on the LSE.

The CEO of London-based Endeavour Mining Corp., which recently bought Canada’s Semafo Inc., also recently told the Financial Times the company was considering a listing on the LSE. Endeavour currently trades on the TSX.

A London listing for Toronto-based Kinross would also open up the company to increased buying from generalist investors who have been wading back into the gold sector after years of sitting on the sidelines.

Earlier this month, Warren Buffett’s Berkshire Hathaway Inc. – considered one of the most prestigious generalist investors in the world – announced it had paid US$564-million for 21 million shares in Barrick.

“It’s definitely an endorsement of Mark [Bristow] and of Barrick for sure,” Mr. Rollinson said.

“But to me the significance here is the sector. It’s time to get into the gold equity space. And I think that will be a great signal for many generalists to say ‘if Berkshire’s getting in, maybe it’s time for us as well.’”

Kinross, with a market value of $14.6-billion, is Canada’s third-biggest gold company by market value, after Barrick and Agnico Eagle Ltd. But this year, not only has Kinross outperformed both of its larger peers, it has bested almost all of the world’s large gold miners. Kinross is the world’s second best performing miner on the S&P/TSX Global Gold Index, which tracks the 25 biggest gold companies; its year-to-date return is 85 per cent.

Kinross shareholder Adrian Day, president of Maryland-based Adrian Day Asset Management, said the main reason the company has outperformed is because its higher risk profile means it is more leveraged to the rising gold price than many of its peers.

“The leverage definitely works for them in a better market,” Mr. Day said.

But operationally Kinross is also in much better shape than a couple of years ago. Its debt levels have come way down, it’s generating much more free cash flow and a long standing negotiation with the Mauritanian government over royalty and other financial terms on its Tasiast mine was settled recently, finally giving investors clarity on what has been a troubled asset for the firm.

“I think it’s a company that’s really turned around and people are beginning to notice,” Mr. Day said.

Kinross’s financial condition has improved to the point where the company is planning on reinstating its dividend, which it suspended in 2013. The company plans to announce a dividend as early as the fall, once it pays back $500-million withdrawn from its credit facility earlier in the year. The one caveat to the timing of the reinstatement of the dividend, Mr. Rollinson said, is uncertainty over the coronavirus pandemic.

Out of its work force of 20,000, Kinross has had about 250 positive cases of COVID-19. While a few of those positive cases got quite sick, there have been no fatalities.

While peers such as Barrick, Newmont Corp. and Kirkland Lake Gold Ltd., have done multibillion-dollar acquisitions in the past few years, Kinross has mostly stayed on the sidelines. Kinross’s biggest recent acquisition was its US$283-million purchase of a Russian development project last year. Mr. Rollinson said that while similar-sized acquisitions are plausible, he signalled that megadeals are a lot less likely.

Mr. Rollinson will be keen not to repeat a huge error in judgment made by his predecessor, Tye Burt. Kinross inherited Tasiast in 2010, through the US$7.1-billion acquisition of Red Back Mining Inc. Acquired near the peak of the last gold bull market, Kinross subsequently wrote off much of the value of the asset. 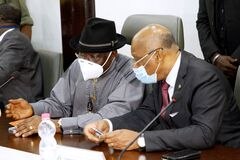