Laurentian Bank of Canada has named Rania Llewellyn as its next chief executive officer, reaching outside its own ranks and choosing a non-francophone woman to reset the bank’s turnaround plan.

Ms. Llewellyn, 44, will be the first woman to lead a major Canadian-owned bank when she takes the helm on Oct. 30. She arrives at Laurentian from Bank of Nova Scotia, where she spent 26 years and rose from a part-time teller’s job to become an executive vice-president in charge of global business payments.

Her appointment signals a shift for the Montreal-based bank. She is an external candidate, following two consecutive CEOs who built their careers inside the bank. She speaks English and Arabic but not French – the first non-francophone since the Second World War to run the bank, which is heavily concentrated in Quebec. And she is an immigrant from the Middle East, at a time when a lack of diversity in the most senior ranks of Corporate Canada has been subjected to intense scrutiny.

Ms. Llewellyn has made it a pillar of her career to push for diversity and inclusion, focusing on creating metrics to measure progress and tying them to the way bankers get rewarded. “Diversity is being invited to the party,” she said in an interview on Tuesday. “Inclusion is actually being asked to dance.”

She is taking over after a turbulent stretch for Laurentian Bank. Her predecessor, François Desjardins, left the bank abruptly in June after the bank had posted weak financial results and before he could finish an ambitious seven-year turnaround plan. Under his watch, Laurentian revamped digital systems and closed branches, but also struggled with protracted union disputes and problems with how it documented some of its mortgages. More recently, the bank slashed its dividend by 40 per cent.

“I’m excited to get my hands dirty and start working with everybody, and really set the new trajectory for this institution,” Ms. Llewellyn said.

Board member Michelle Savoy, who led the search committee for the bank’s new CEO, said in a statement that the board is “confident she is the change agent this bank needs to address the headwinds it faces and to establish a foundation for future growth and success.”

Ms. Llewellyn’s ascent to the CEO’s chair at Laurentian, the seventh-largest domestic bank, marks a milestone for a major Canadian-owned bank. The path to get there was paved by other senior women in banking: Sandra Stuart spent five years as CEO of HSBC Canada, a subsidiary of British-based HSBC Holdings PLC, and was recently succeeded by Linda Seymour. Gillian Riley is CEO of Tangerine, the digital bank owned by Scotiabank. And Jane Fraser was recently named CEO of New York-based Citigroup Inc., the first woman to take the top job at a leading Wall Street bank.

Born to an Egyptian father and Jordanian mother, Ms. Llewellyn grew up in Kuwait before living in Egypt, where she studied for two years at the American University in Cairo. After the Persian Gulf War, her family was concerned about stability in the Middle East and, in 1992, when Ms. Llewellyn was 16, they emigrated to Halifax, where she finished her bachelor’s degree in commerce at Saint Mary’s University.

“Typical immigrant story: I couldn’t get a job, given my first and last name, which I changed when I got married,” she said. “And so my first job was as a part-time teller at Scotiabank while I was doing my MBA,” also at Saint Mary’s.

At Scotiabank, she gained experience in commercial and digital banking – two areas that are key to Laurentian Bank – including a stint as a senior vice-president in charge of growth strategy for commercial banking. She also served as CEO of Roynat Capital, Scotiabank’s alternative financing arm, which has roots in Montreal.

“Working in Quebec is not new to me,” she said. She expects to spend a lot of time in Montreal and across the province, but her husband and two children live in Toronto. And she has enrolled in French classes to start closing the language gap with many of the bank’s staff and customers.

“I truly understand the importance of speaking the language,” she said. “Communication is going to be front and centre and I’ll be working hard at that.”

Ms. Llewellyn faces an uphill battle to win investors' trust. Under Mr. Desjardins, the bank’s stock price dropped about 42 per cent, and had fallen a further 13 per cent since then. On Tuesday, the bank’s shares edged 0.2 per cent higher, to $26.36.

Hiring an external candidate sends a positive signal to investors, said Gabriel Dechaine, an analyst at National Bank Financial Inc. “We believe [Laurentian Bank] needs a fresh face to lead the bank out of several years of sub-par performance,” he wrote in a note to clients. “We also believe a new CEO will have more flexibility to take dramatic action to put the bank on more solid footing during the current downturn and into the future.” 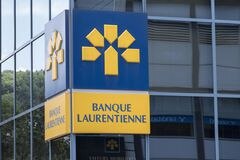 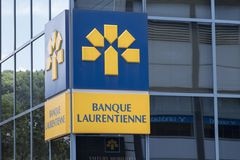