Le Château Inc., the Canadian chain known for decades as a go-to purveyor of prom outfits and club wear, is shutting down after 61 years in business.

The Montreal-based clothing retailer is preparing to sell off inventory in liquidation sales and close 123 stores across Canada. It is the latest Canadian retailer to file for creditor protection as the impact of the COVID-19 pandemic continues to pose challenges for the industry. The move will affect roughly 1,400 employees.

The company announced on Friday that it has been granted protection under the Companies' Creditors Arrangement Act (CCAA), in order to proceed with winding up its operations. Le Château had been looking for alternatives in recent months, including trying to refinance its debt and looking for a buyer for its stores.

“The appetite today from financiers for retail, it’s not great,” Franco Rocchi, Le Château’s senior vice-president of sales and operations, said in an interview Friday. “Especially with the forecasts that we may not have a Christmas this season. ... With the cancellation of proms, of weddings, of summer festivals, the restaurant situation, the bar situation – those all fed the demand for our product. That’s what people came to us for. The retail traffic is not there; the traffic for dresses and occasion wear even less so.”

Le Château was founded in 1959, on the eve of the youth revolution of the 1960s. Founder Herschel Segal saw an opportunity in the changing fashion appetites of young people, selling bell bottoms to teenagers and following the disco style trends of the seventies. It continued to expand through the eighties and nineties, providing accessibly-priced fashion.

As the popularity of fast-fashion grew - with the arrival in Canada of brands such as Forever21 and H&M - Le Château began to focus on 25- to 45-year-old shoppers.

As part of a turnaround plan, Le Château closed roughly half its stores in the past five years – at its peak, the chain had 243 locations – and invested $10-million to improve its e-commerce platform.

The company was losing money even before the shock to the industry that resulted from COVID-19. Le Château reported a $69.2-million net loss in the year ending on Jan. 25, 2020, compared with a $23.8-million net loss in the prior year. While e-commerce sales were growing, they did not make up for falling sales in stores. Le Château also has a large presence in shopping malls, which have been particularly hard hit by restrictions during the pandemic.

Le Château announced in July that it was negotiating with its lenders and seeking new sources of financing. At the time, it reported earnings and included a warning about “material uncertainties that cast significant doubt upon the company’s ability to continue as a going concern.”

Companies prepare earnings reports on the assumption they will remain in business as a “going concern.” If there is meaningful doubt about that, they or their auditors are required to tell shareholders. This warning caused Le Château to default on some of the covenants under a $70-million revolving credit facility and a $15-million loan.

The company was scheduled to hold its annual general meeting of shareholders on Thursday morning, but cancelled it the day before. Le Château stores will remain open through its liquidation.

Other clothing retailers have been struggling. Other shopping mall staples, Reitmans Canada Ltd. and Aldo Group, both filed for creditor protection in May; and Laura’s Shoppe Inc., which operates the Laura and Melanie Lyne banners, filed in July. Clothing chain Frank and Oak began restructuring in June, and was recently sold to a New York-based investment firm. All of those brands are based in Montreal, a hub of fashion retailing.

After an initial surge in consumer activity after lockdowns in the spring, Canadian retail sales growth has slowed. Retail sales grew just 0.4 per cent in August, according to Statistics Canada, which also gave a preliminary estimate this week saying that September sales were “relatively unchanged.” And clothing stores have been among the hardest hit, with sales down 13.6 per cent in August compared with the prior year, according to Statscan.

The Canadian apparel market had roughly $31.2-billion in sales last year, according to market research firm Trendex North America. Trendex president Randy Harris said in an interview on Friday that he expects by the end of 2020, clothing sales will have dropped 15 per cent to 18 per cent compared with the prior year.

“Retailers in the middle of the market – except for the fast-fashion and the off-price retailers [selling higher-end brands at a discount] – I think they all need to be worried,” Mr. Harris said. 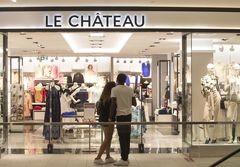