A significant volume of activity at the Port of Montreal could be paralyzed starting Monday after unionized dock workers issued a notice saying they intend to strike.

The Maritime Employers Association, which represents ship owners and operators, received a notice from the longshoremen that they will walk off the job for four days starting Monday at 7 a.m., the Port of Montreal said in a notice Friday posted to its website.

Mooring and cargo-handling services usually provided by the workers will be suspended, the port authority said. It said it will try to make up for the delays.

“[We’re] concerned about this situation, as port activities are essential to keep the economy running smoothly and, in some cases, to ensure public health and safety,” the Port of Montreal said in the notice. “A prolonged stoppage or slowdown in port operations is unwelcome, not only for the logistics and supply chain but also for the businesses and citizens who benefit from the movement of goods.”

An extended strike at Eastern Canada’s biggest port could undermine the region’s economic recovery at a critical time. Factories in Quebec and Ontario are ramping back up after forced closings in the spring to contain the coronavirus pandemic and many exporters depend on the port to get their goods to international markets.

Up to 1,151 workers who are members of the Canadian Union of Public Employees-led Syndicat des Débardeurs will take part in the pressure tactics, according to a portion of the strike notice shared with The Globe and Mail. The stoppage includes activities at the main port lands as well as its Contrecoeur terminal, the notice states.

Ronald Boisrond, spokesman for the union, declined to comment Friday on the reasons for the walkout.

Employers Association spokesman Apraham Niziblian said there were many intense days of negotiations, including Friday. “That is why we are surprised by the announcement of the strike,” he said. “We continue to believe in the process of negotiations.”

Liquid bulk handling, grain handling and the Oceanex service will not be affected by the strike, the port authority said. Workers will respect a Canada Industrial Relations Board decision from June that said they must maintain service work to Oceanex, which supplies goods to the province of Newfoundland and Labrador, according to the strike notice.

This would be the second work stoppage in a month at the Port of Montreal. On July 2, longshoremen walked off the job for 40 hours at two of the port’s 19 terminals.

Montreal’s port authority said in June it expects a 12-per-cent drop in traffic volumes this year as the COVID-19 pandemic rages on. All cruise ship activity has also stopped. The port processed about 17.7 million tonnes of cargo and bulk goods through the first half of 2020, a 9-per-cent drop from the same period last year.

The dock workers have been trying to win a new contract since the last collective agreement expired at the end of 2018, according to the CUPE website. Their efforts have been buoyed by the CIRB decision, which upheld their right to strike as long as some specific services are maintained.

The Maritime Employers Association had argued that the entirety of the dock workers’ labour should be considered an essential service but the federal board disagreed. 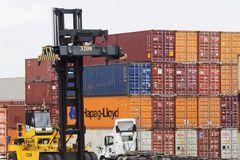