Bank of Canada Governor Stephen Poloz said he’s not worried about inflation temporarily rising above the 2-per-cent target this year, and the acceleration by itself isn’t sufficient to warrant an interest-rate increase.

Speaking on Saturday to reporters in Washington, Mr. Poloz said a tolerance for temporary movements is exactly why the central bank uses a 1-per-cent to 3-per-cent range for inflation and doesn’t mechanically raise interest rates when price growth surpasses the 2-per-cent point.

“What I don’t want is for people to be spending this entire year asking me what I’m up to because inflation is above target,” Mr. Poloz said. “You need once in a while to remind people that there’s a range and that’s okay, the policy allows for this. We’re not violating our target in some way.”

Mr. Poloz is maintaining a sanguine view, even with inflation expected to reach the highest levels in seven years, largely because he believes the drivers are temporary. The central bank expects gains in the consumer-price index to average 2.3 per cent this year, before returning to near the bank’s 2-per-cent target in 2019.

At a rate decision on Wednesday where he kept his benchmark interest rate on hold at 1.25 per cent, Mr. Poloz highlighted the central bank’s range framework for inflation.

“Some people think it’s more mechanical, and that’s fair. If inflation is going to be 2.3 [per cent] or something like that, you should be raising interest rates to make it 2,” Mr. Poloz said. “I want to go out of my way to help them appreciate that’s not the way it works, and that’s why I mentioned the range in the context of a forecast that clearly shows the overshoot.”

Mr. Poloz said he even sees some incidental benefits from the brief acceleration. Since inflation has under-performed in recent years, a period above target could actually help reinforce expectations for inflation at 2 per cent, he said.

“In that abstract way, it’s actually a positive thing because we’ve had an extensive period where it’s been below, so that period of slightly above is going to help reinforce that 2-per-cent average which we haven’t quite made in the last few years,” Mr. Poloz said. “There is no intention there. I’m just saying that’s a positive byproduct of that modest overshoot that’s happening.”

Investors predict Mr. Poloz will increase rates twice more this year, which would bring the benchmark rate to 1.75 per cent, still below what the bank considers a “neutral level” of between 2.5 per cent and 3.5 per cent. That implies rates may at least double at some point from the current level of 1.25 per cent.

But Mr. Poloz said the central bank’s estimate of the neutral rate is a theoretical, and that it assumes there are no headwinds hitting the economy, which isn’t the case now. That means the neutral rate, right now, is probably lower.

“We know we’ve got all kinds of headwinds. I keep listing them,” Mr. Poloz said. “Those things tell you whatever the equilibrium rate is now – where you are not stimulating relative to that equilibrium or withdrawing – it’s below that zone.” 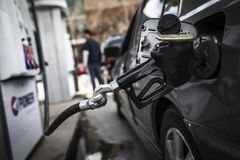 Why Poloz just got bullish on how fast Canada can grow
April 18, 2018 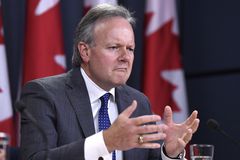 The loonie takes a dive as BoC in no rush to hike rates
Subscriber content
April 18, 2018 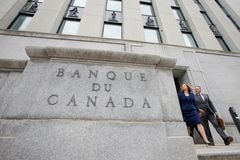