TMX Group Ltd. CEO Lou Eccleston left the company with nearly $44-million in company stock awards after a five-year tenure that ended abruptly earlier this month after TMX investigated allegations he sexually harassed employees during his tenure at Bloomberg LP in the 1990s.

The total includes more than $16-million in “unvested” options and shares that he would have forfeited if he had resigned. Mr. Eccleston, 61, announced his retirement on Jan. 10, almost a year before his contract was set to expire at the end of 2020.

While the TMX probe “found no evidence that Mr. Eccleston engaged in sexual harassment or sexual misconduct while employed at TMX," The Globe and Mail learned that TMX employees alleged he bullied colleagues and fostered a toxic work environment at the operator of the Toronto Stock Exchange.

Mr. Eccleston’s stock holdings are not a severance package; rather, they represent share awards the company gave him as compensation since his November, 2014, arrival as chief executive, and which he still held at his departure. The $44-million in stock options and other share awards – which were valued by TMX at $1-million or $2-million a year when granted – became immensely more valuable as TMX stock gained nearly 150 per cent during his tenure.

TMX says executives who resign, as opposed to retiring, must forfeit share awards that have not vested. However, the TMX circular filed in April, 2019, said the 61-year-old Mr. Eccleston had “met the age threshold” to be eligible for “retiree treatment” under the stock plans – in other words, keeping all unvested options and shares.

TMX Group spokesman Shane Quinn decline comment for this story, saying only “disclosure will be made in the upcoming TMX Group Management Information Circular later this year.”

Over the course of Mr. Eccleston’s tenure, TMX awarded its CEO a total of 758,583 stock options, and records suggest he held them all until his departure. A stock option allows the holder to buy a share of stock at a set price, known as the exercise price. As the market price rises, a low exercise price makes the options more valuable.

At the $110.60 closing price on the day TMX announced Mr. Eccleston’s departure, the options were worth $36.7-million. TMX’s past disclosures suggest around 250,000 options held by Mr. Eccleston had not yet vested; those options are worth slightly more than $9-million of that amount.

TMX also gave Mr. Eccleston stock under two other award programs. Restricted-share units were scheduled to vest 35 months after their grant as long as Mr. Eccleston stayed with the company. Performance-share units also vest after 35 months, but their ultimate value depends on how TMX Group stock performs over three years versus the S&P/TSX Composite, a broad-based Canadian stock index (members are chosen by S&P Dow Jones Indices, not the Toronto Stock Exchange).

All stock holdings, and values, were current as of his Jan. 10 departure. Mr. Eccleston no longer has the obligation to disclose his sales, and he may already have exercised options or sold shares. Their value will ultimately depend on when he sells them and the price of TMX stock at that time – which could be lower than today.

TMX Group shares closed Tuesday at $118.06, up more than $7 a share since Mr. Eccleston’s retirement. That gain over seven trading days has added more than $6-million to the value of Mr. Eccleston’s shares, putting it at slightly more than $50-million, The Globe calculates.

The sexual-harassment allegations from Mr. Eccleston’s Bloomberg tenure were published in November in an investigative story by Business Insider, which focused on presidential candidate Michael Bloomberg. They were based in part on court filings.

TMX launched an “expedited but thorough investigation,” according to the company. While it found “no evidence” of sexual misconduct by Mr. Eccleston at TMX Group, the company said Mr. Eccleston “believes it is in the best interests of TMX Group, including its employees and stakeholders, for him to retire early.”

Opinion
Has the TMX board learned from its CEO’s departure?
Subscriber content
January 16, 2020 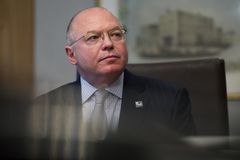 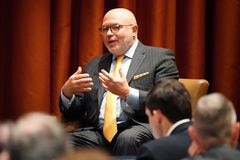 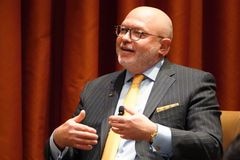