Magna International Inc. said the U.S. strike at General Motors Co. helped reduce sales by 3 per cent, as the Ontario-based automotive company swung to a loss in the third quarter and reduced its full-year profit outlook.

The 40-day strike by 49,000 U.S. workers at Magna’s largest customer slashed full-year revenue by US$500-million and shaved profit margins by about 30 basis points for the third quarter and full year, Don Walker, Magna’s chief executive, said on a conference call with analysts on Friday morning.

The effect of the GM walkout, which halted production at dozens of GM factories and caused thousands of layoffs at Ontario GM plants and parts suppliers, will be felt in the fourth quarter as well, he said.

Magna said on Friday its sales for the three months ended Sept. 30 slipped to US$9.3-billion from US$9.6-billion in the third quarter of 2018. Excluding foreign-exchange impacts and divestitures, sales rose by 2 per cent, outpacing the 3-per-cent slump in global auto sales.

A slowing global economy amid the U.S.-China trade war has hurt consumer sentiment that has weighed on auto sales, while trade tariffs on metals have pushed vehicle-production costs up by billions of dollars, hurting automakers and parts suppliers’ profitability.

Magna, which makes parts such as body structures, chassis and powertrains for customers including Ford Motor Co. and Volkswagen, cut its 2019 sales outlook to between US$38.7-billion and US$39.8-billion, from its previous range of US$38.9-billion to US$41.1-billion, largely because of the strike at GM.

“All things considered, our third-quarter earnings were relatively in line with our expectations. However, we have made some adjustments to our outlook largely to reflect estimated lost volume related to the GM strike and higher launch costs,” said Vince Galifi, Magna’s chief financial officer.

Investors responded to Magna’s quarterly results by sending down the company’s stock price by almost 2 per cent in late morning trading on the Toronto Stock Exchange.

Itay Michaeli, a stock analyst at Citi Research, said he expected the GM strike to prompt Magna to reduce its guidance, but that the revenue impact was larger than he expected.

Magna took a US$530-million non-cash charge owing to poor performance at its three Getrag Group joint ventures in China and Europe. Getrag was hit by a faster-than-expected drop in demand for manual transmissions, higher costs in China and the loss of some Chinese manufacturing customers.

“As we move through 2019, vehicle volumes in China have continued to deteriorate,” Mr. Walker said. He described the Chinese joint ventures as disappointing, but said the European part has exceeded expectations. Magna recently reached a deal to supply transmissions for BMW Group’s entire front-wheel drive fleet, a contract Mr. Walker said is the largest transmission production order Magna has won. He would not say how much it is worth, citing BMW’s request for confidentiality.

Magna’s body and structures division posted a 5-per-cent drop in sales to US$4-billion, compared with the year-earlier period, weighed down by the GM strike, slipping auto sales and the end of production of the Chevrolet Cruze.

The division that makes powertrains, electronics and other components faced similar headwinds, and saw sales drop by 9 per cent to US$2.7-billion.

Launches of new vehicles by BMW and Lynk and Co. helped Magna’s seat division sales rise by 4 per cent to US$1.3-billion, overcoming the effect of the GM strike. Sales of the division that builds complete vehicles, including the Toyota GR Supra, Jaguar I-Pace and Mercedes-Benz G-Class, rose by 9 per cent to US$1.5-billion in the third quarter, from a year earlier. 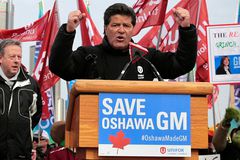 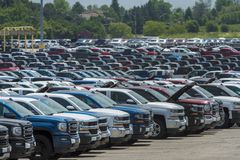 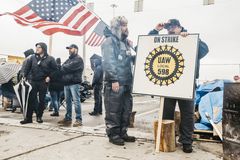