Canada’s two biggest insurers are piling up capital and continuing to face Bay Street questions about when they might use their cash piles for big deals.

Manulife Financial Corp. chief executive Roy Gori tried on Thursday to temper analysts’ expectations, saying “we don’t need inorganic opportunities” to deliver on the company’s earnings goals. “We want to make sure that we’re not just making acquisitions for the sake of doing a transaction.”

Sun Life Financial Inc. CEO Dean Connor said last week that while “we continue to be very active in looking for opportunities,” Sun Life’s near-term focus is on strategic partnerships.

The CEOs’ comments came as the two companies reported solid earnings in line or slightly ahead of expectations.

Manulife’s results, issued Wednesday evening, included “core earnings” of 72 cents a share, up 2 cents from the prior-year period and a penny above the average of analysts’ profit forecasts for the company. Sun Life, which reported July 31, said it had “underlying earnings” of $1.24 per share, on target with analyst expectations. The companies strip out certain items, including some investment results and changes in assumptions about their insurance policies, in arriving at the earnings metric.

That leads to questions about whether some might be spent on buying another business, particularly outside of Canada. Doug Young of Desjardins Securities Inc. noted Manulife’s India joint venture and asked whether the company might see some “inorganic opportunities” there.

Anil Wadhwani, CEO and president of Manulife Asia, responded “our area of focus right now is the joint-venture partnership. … In many ways, it will allow us to test what is in the market like India and if the rules were to change, then we may want to kind of explore the opportunity on the insurance side in the future.”

Mr. Gori said, for Manulife as a whole, “first and foremost,” the company wants to improve its debt metrics. It also wants to continue share buybacks – 50 million shares in just the past three quarters, according to analyst Sumit Malhotra of Scotiabank.

Manulife said in February it would boost its buyback program, which runs until November, from 40 million shares to 99 million shares, or 5 per cent of the company. Share buybacks increase earnings per share by reducing a company’s share count and are seen by some as a dividend substitute, because shareholders can choose to sell or not.

Sun Life isn’t pushing back quite as hard on the deal talk. Asked by analyst Meny Grauman of Cormark Securities Inc., about whether Sun Life was waiting for a downturn before making an acquisition, Mr. Connor made his comment about the focus on “strategic alignment opportunities” before adding “we continue to be very active in looking for opportunities. … We’ve got lots of dry powder on the balance sheet to take advantage of dislocations."

Sun Life said last week it plans to launch a new buyback program, starting this month, for 15 million shares, or about 2.5 per cent of the company. The number of shares is slightly smaller than the 18 million bought in the previous program. In an interview with The Globe and Mail, Sun Life chief financial officer Kevin Strain said Sun Life believes the number to be appropriate to keep its “M&A flexibility going forward.”

The contrast in the two perspectives may come from the companies’ views of the value of their currency. Heading into Thursday’s trading, Manulife shares traded at roughly 50 per cent of their record high, while Sun Life’s stock price was about 93 per cent of its historical peak, according to Standard & Poor’s Global Market Intelligence. 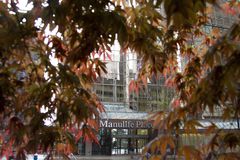 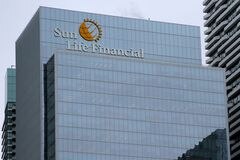