GoodLeaf Farms opened its first commercial farm, a 45,000-square-foot facility in Guelph, Ont., in late 2019. There, it uses LED lights and hydroponic trays to grow “microgreens” such as arugula, pea shoots, radishes and kale, mostly sold within a two-hour drive of the plant.

GoodLeaf plans to build and commission two slightly larger vertical farms this year and next at as-yet undisclosed locations, one in Eastern Canada and the other in Western Canada.

Barry Murchie, GoodLeaf’s chief executive officer, said the site selection process will be completed shortly. “We expect to break ground on the first farm in the next 45 to 90 days,” he said.

GoodLeaf’s relationship with the global food giant affords compelling advantages. Mr. Murchie spent 25 years at McCain, working at its operations in Japan, Singapore and Argentina. Its focus on Atlantic Canada brought him into contact with GoodLeaf, which was founded in 2015 in Truro, N.S., and still has a research and development facility there.

He joined the board of TruLeaf Sustainable Agriculture (GoodLeaf’s parent) in 2018, when McCain first invested, and assumed the top executive post last year. McCain’s cumulative investment is now more than $65-million.

Mr. Murchie said this relationship allows GoodLeaf to tap McCain’s deep expertise in engineering, procurement and agronomy. It also affords considerable credibility with prospective customers. “Quite often, you can see large companies dominating small companies,” Mr. Murchie added, “but McCain has been extremely respectful in making sure that they preserve the culture and spirit of a smaller company.”

And what does McCain, a company more at home in the frozen foods aisle, get in return? Peter Dawe, McCain’s chief strategy officer, said his company is eager to gain experience with fresh produce.

“For us, this hit all the consumer trends: less waste in the refrigerator, less time spent on the road, fresher, tastier,” he said. “And it allowed us to explore farming techniques to be more sustainable: less use of water, more efficient use of land.”

The vast majority of leafy greens sold in Canadian supermarkets, particularly in winter, originates from fields in sunnier places, including California and Arizona. Vertical farms raise the prospects of growing them locally year-round, greatly reducing the kilometres driven from farm to plate.

Vertical farms attempt to maximize crop area for every square metre by stacking crops and growing (usually indoors) on racking systems using artificial light (typically LEDs), while carefully controlling other environmental conditions such as temperature, humidity and nutrients. Some operations, like GoodLeaf’s, are highly automated and larger-scale, while others are labour intensive and conducted in small spaces such as shipping containers.

Proponents regard vertical farming as a means of addressing expected food shortages as Earth’s population grows and arable land becomes increasingly scarce. It can proceed 365 days a year, and there’s no risk of droughts or frosts. Vertical farming also uses less water: 95 per cent less, according to GoodLeaf.

Skeptics emphasize vertical farms must compete with traditional field farming and greenhouses, where the awesome power of sunlight is free. (Some jurisdictions generate electricity predominantly using fossil fuels, which also increases virtual farming’s carbon footprint.) Water and fertilizer efficiencies touted by vertical farming enthusiasts are overstated, they claim, as are the savings from reduced transportation costs.

GoodLeaf has selected higher-margin crops that mature rapidly, in a matter of days or a few weeks. “Right now we’re in the market, and we are at price parity to organics,” Mr. Murchie said.

Small vertical farm startups have sprouted in Canada in recent years but remain marginal players, and there have already been casualties. A few years ago, one based in Saskatoon was featured in flashy videos promoting vertical farming as a solution for feeding future generations. (The founder’s son was seen crawling the plant’s floors.) In late 2018, the company announced it was switching to cannabis.

Sylvain Charlebois, director of Dalhousie University’s Agri-Food Analytics Lab in Halifax, said McCain’s relationship with GoodLeaf sets the vertical farmer apart from other high-tech agriculture outfits in Canada, which he said are starved for capital, severely limiting their growth prospects.

“As soon as you tell venture capitalists that they have to wait for a while before they get their money back, they’re going to look elsewhere,” he said. “That’s always been the biggest problem in agriculture.”

Prof. Charlebois said while vertical farming is still in its infancy, the pandemic has prompted many governments to promote the localization of food supply chains.

“COVID has made many provinces realize that food autonomy hasn’t been a priority as much as it should have been,” he said. 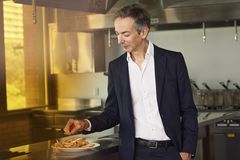