This time last year, in response to reports coming from China of a contagious new virus, grocery retailer Metro Inc. convened a pandemic committee to plan for what was ahead. As it turned out, that included stress on the supply chain; millions of dollars in spending on cleaning and protective equipment; a public backlash over bonus pay for front-line workers; renewed calls for regulation of the sector; and consumer demand for e-commerce at a level that executives had not expected for another two to three years.

Now, chief executive officer Eric La Flèche is trying to prepare the company for a future that looks different than anticipated.

On Tuesday, the Montreal-based company announced that in addition to the work it is doing to build up its home-delivery capacity for e-commerce orders, it is also stepping up click-and-collect services to allow shoppers to pick up online purchases at stores. It intends for the service to be available at 170 Metro stores by the end of this year. This represents a significant step up from its plans just a couple of months ago.

“Our [e-commerce] model today is skewed heavily toward delivery. The hub stores that we operate do offer click-and-collect, but it’s a very limited number of stores,” Mr. La Flèche said in an interview Tuesday, adding that store pickups are particularly important in smaller markets where there is not enough population density to justify the cost of delivery, but where the retailer wants to be able to offer e-commerce. “It’s a question of having a full offer. ... We feel it’s another bow in the arrow that we need to have to be competitive.”

As many restaurants and bars were shut down and Canadians were urged to stay home, people cooked for themselves more often. Grocery sales have risen at a pace that is unusual for an industry accustomed to much slower growth.

Metro, which owns grocery stores including Metro, Food Basics and Super C, reported on Tuesday that its first-quarter sales grew 6.2 per cent to $4.28-billion. In the 12 weeks ended Dec. 19, 2020, Metro’s food same-store sales increased by 10 per cent. Same-store sales is a key metric in retail because it tracks sales growth not affected by new store openings or closings. In the same quarter the prior year, just before the impact of COVID-19 began to be felt in Canada, Metro’s food same-store sales grew by just 1.4 per cent. Online food sales grew by 170 per cent compared with the same period the prior year.

Tensions have also increased in the industry in the past year, as competitors including Loblaw Cos. Ltd. and Walmart Canada announced increases to the fees they charge suppliers to stock their products. This has led to renewed calls from suppliers and smaller retailers to impose a code of conduct to regulate the industry. However, Mr. La Flèche said on Tuesday that Metro is opposed to the idea of government intervention.

“Some suppliers may say otherwise and voice it pretty strongly, but most suppliers I talk to think the industry is functioning pretty well,” he said. “... This whole thing about a code of conduct is unfortunate. I don’t think there’s a crisis between suppliers and retailers – certainly not us and our suppliers.”

The country’s largest grocery retailers faced criticism last year for cancelling pandemic pay increases for front-line staff in June. As cases have risen and lockdown measures have intensified, some grocers have reinstated bonus pay. Competitor Empire Company Ltd., for example, has instituted bonuses in regions where government-mandated lockdowns are introduced.

In late November, Metro announced a one-time “thank you gift” for store and distribution-centre employees, in the form of a gift card redeemable at Metro-owned stores. As lockdown measures continue, the company plans another gift card payout in February, in the same amounts: $300 for full-time staff, $150 for part-time employees working 15 hours a week on average, and $75 for other part-time staff.

Metro, which also owns the Jean Coutu drugstore chain, reported pharmacy same-store sales grew by 1.3 per cent in the first quarter. While prescription drug sales grew, front-of-store sales at the company’s drugstores declined with restrictions in Quebec on the sale of non-essential goods, a milder cold and flu season that weakened demand for over-the-counter remedies, and disruptions from an eight-week strike at its distribution centre in Varennes, Que.

Mr. La Flèche also pointed out that pharmacy associations have been having conversations with government authorities about the role they can play in COVID-19 vaccinations.

“We are told that eventually, community pharmacies will be involved … to facilitate vaccination of the population,” he told reporters on a conference call Tuesday. “Our position is that we’re ready, willing and able.”

‘It’s another arrow in our quiver’: Metro Inc.’s CEO on plans to expand click-and-collect, other e-commerce as pandemic reshapes industry
Subscriber content
January 27, 2021 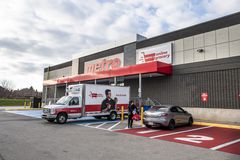 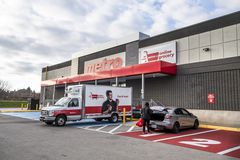 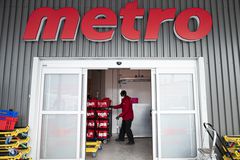