Metro Inc. Metro is stepping up its strategy for filling e-commerce orders for home delivery in urban markets, as Canadians' appetite to shop for groceries online grows.

The Montreal-based retailer announced on Wednesday that it will spend approximately $15-million to open a new store dedicated solely to online orders next year. Until now, Metro’s e-commerce strategy has focused on filling delivery orders at existing stores. The company has three such “hub stores” on the island of Montreal, but the new 100,000-square-foot facility – a type of location sometimes referred to in the industry as a “dark store” – will absorb those stores' orders starting next summer.

“It’s an evolving market in terms of customer demand, customer expectation, and in terms of technology and business models,” Metro’s head of e-commerce, Marc Giroux, said in an interview.

The new facility should allow the company to fill online orders more efficiently in Montreal. Metro plans to build similar facilities in population-dense areas where demand is high, including in Toronto sometime in 2022. The online-only store is different from a distribution centre because it will have in-store features such as on-site butchers, fishmongers and produce handlers. That gives online customers more input on orders, such as specifying the weight and thickness of a cut of beef, or how many apples they’d like to receive.

In secondary markets, orders will continue to be filled in “hub” stores, such as one that recently opened in Sherbrooke.

E-commerce orders will still be available for “click and collect” pickup at store locations – which will be the main e-commerce offering in smaller markets where delivery is difficult. Metro also announced on Wednesday that it plans to more than double the number of stores offering pickup for online orders by the end of next year – to more than 100 stores, from 40 currently.

Unlike competitor Loblaw Cos. Ltd., which does the vast majority of its online business through click-and-collect, Metro fills a large percentage of e-commerce orders for home delivery. Orders for store pickup have also grown considerably throughout the pandemic. Metro’s online food sales grew by 160 per cent in the fourth quarter, compared with the same period last year.

While grocers are working to keep up with e-commerce demand, in-store sales still make up the majority of the business. Like other retailers, Metro is incurring more costs during the pandemic to implement safety measures in stores: It reported $27-million in COVID-related costs in the fourth quarter. Store capacity limits have led to lineups outside some locations, an unpleasant prospect for shoppers as the cold weather sets in.

“If there are lineups outside, we’ll have to find some ways to put some shelters. We are all preparing for that,” president and chief executive officer Eric La Flèche said on a conference call to discuss the company’s earnings Wednesday.

All of Canada’s largest grocers have experienced a surge in sales this year, with public-health restrictions deeply affecting the restaurant industry. Many Canadians have restricted outings and are cooking for themselves more at home.

Metro reported $4.1-billion in sales for the 12 weeks ended Sept. 26, up 7.4 per cent compared with the same period last year. Same-store sales – an important metric that tracks sales growth not affected by new store openings – rose 10 per cent at its grocery banners in the fourth quarter. That trend has continued. Metro reported on Wednesday that grocery same-store sales have grown 11 per cent in the four weeks since the end of the fourth quarter.

Metro, which also owns the Jean Coutu drug store chain, reported pharmacy same-store sales growth of 5.5 per cent in the fourth quarter. A labour conflict at the Jean Coutu distribution centre in Varennes, Que. – which began on Sept. 23 and has now been resolved – will likely affect Jean Coutu’s sales in the first quarter, the company said.

The company’s net earnings for the fourth quarter were $186.5-million or 74 cents a share, compared with $167.4-million or 66 cents in the same period last year.

On Wednesday, Metro announced a renewal of its share buyback program. Beginning on Nov. 25, the company has the option to repurchase up to seven million or roughly 2.8 per cent of its outstanding shares over the coming year. In the past 12 months, the company has spent $240.8-million to buy back 4.26 million common shares. 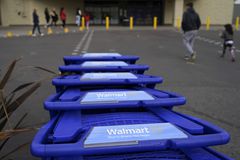 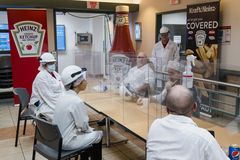