Hot on the heels of a US$100-million funding round that vaulted Clear Finance Technology Corp. to unicorn status, the e-commerce merchant financing company has raised a further US$215-million in equity from a group led by global powerhouse SoftBank Group Corp .

Now operating under the brand name Clearco – formerly Clearbanc – the company was founded by entrepreneurs Michele Romanow and Andrew D’Souza, who are partners in life and business. They were in the final stages of closing their most recent funding round in April, which valued the company at almost US$2-billion, when Tokyo-based SoftBank came calling, intrigued by Clearco’s efforts to spearhead a new type of technology-driven lending to smaller companies.

“They approached us,” Ms. Romanow said. “They got introduced to us and they had heard what we were doing and were just very excited.”

The deal progressed quickly, culminating in a Zoom call with Masayoshi Son, the maverick founder and chief executive of SoftBank.

“It was quick, it was intense,” Mr. D’Souza said of the call. “We spent a bunch of time brainstorming what this [company] could be.”

This is SoftBank’s first investment in a Canadian company from its Vision Fund 2. Joining it in the Clearco financing are Intuit Inc., Bow Capital and Park West Asset Management LLC.

Clearco offers cash advances to online merchants – primarily to spend on marketing – through digital channels such as Facebook and Google. It receives a small percentage of the ensuing revenues until the advance is repaid, plus a premium of at least 6 per cent. To date, Clearco has provided about US$2.4-billion to 5,500 companies.

For entrepreneurs, those funds can be less onerous and expensive than securing bank loans or venture capital or racking up credit-card debt. Prospective clients give Clearco access to business data from their bank accounts, online payment processors and online advertising accounts. Clearco then crunches that data to predict future revenue and cash flow, generating automated decisions about which companies to finance.

That data-driven approach was attractive to SoftBank, which has a strong track record of making aggressive bets on companies with the potential to dominate technology and e-commerce categories. That has included hugely successful investments in companies such as Alibaba and food-delivery service DoorDash, but also big misses on companies such as co-working startup WeWork and failed inventory finance specialist Greensill Capital.

Clearco is growing quickly – the company has 378 staff, up from about 300 in April – and the new funding will help expedite its international expansion, particularly in Europe and Asia. “It is being able to hire better people so we can go into more markets both deeper and faster,” Ms. Romanow said.

The company also wants to tap into SoftBank’s experience as a global power broker in tech investing. “SoftBank has seen the scale that we’re aiming for,” she said.

Investing in Clearco gives SoftBank a stake in a front-runner in an emerging category of alternative financing options for startups and small businesses. “Clearco is a market leader who has created an entire industry that is fiercely dedicated to democratizing access to capital and a full suite of services that serve the founder journey,” Kristin Bannon, director at SoftBank Investment Advisers, said in an e-mailed statement.

The funding from SoftBank is an extension of Clearco’s most recent funding round, which attracted investors from U.S. tech companies such as Apple Inc., Airbnb Inc., Robinhood Markets Inc., Square Inc. and Stripe. Clearco declined to say whether the new funding has changed its valuation.

Clearco funds its advances to clients with off-balance sheet debt. While SoftBank’s investment does not include any new debt financing, having the SoftBank name attached to Clearco has opened doors in capital markets, Mr. D’Souza said. “We feel even more confident that the availability and the terms on that debt capital continue to improve.” 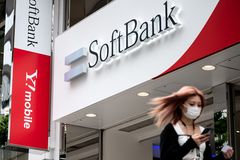