The world’s biggest mining companies are both blessed and cursed.

They are blessed because most of them produce the commodities – copper, nickel, cobalt, among others – that are essential for the transition to the “clean” economy. They are cursed because most of these same companies also produce the commodities – coal, oil, iron ore – that are warming the planet and falling out of favour with investors who increasingly view their portfolios through the lens of environmental, social and governance (ESG) standards.

So far, the cursed side is winning, with the Big Five mining companies trading at low valuations, generally 2½ to four times enterprise value (debt and equity) to EBITDA (earnings before interest, taxes, depreciation and amortization).

Tesla Inc., the electric-car company that uses many of the “clean” metals produced by mining companies – as well as some dirty ones – trades at 70 times, partly because chief executive Elon Musk’s battery-powered machines are seen as part of the solution to a warming planet and are beloved by ESG investors, whereas mining companies are seen as part of the problem and increasingly shunned by them. The S&P 500 trades at 15 times EV/EBITDA – three times greater than that of the Big Five.

Their plight is made worse by the extreme difficulty of reducing, and eventually eliminating, Scope 3 emissions. These are the indirect emissions in a mining company’s value chain, notably from the use of the commodities processed by their customers, such as the steelmakers who buy iron ore from BHP, Vale, Rio Tinto and Anglo American (Glencore, the other Big Five member, does not produce iron ore).

A few years ago, Scope 3 emissions barely registered among ESG investors; they focused on a company’s direct emissions. Today, Scope 3 reductions are considered the key to sustainability. There is a recognition among Big Mining companies (and Big Oil and Gas) that they have to take a “stewardship” role in reducing these emissions, even if they have no direct control over them.

Scope 3 emissions account for about 95 per cent of the mining industry’s overall output, and companies that fail to lay out a clear and determined strategy to bring them down will get punished by investors and treated as pariahs at climate summits and among environmental scientists and politicians, as Big Oil is.

“In a carbon-constrained world, companies that are not demonstrating a concrete transition to net-zero emissions will increasingly lose value against those who are making the transition,” said Emma Herd, the CEO of Australia’s Investor Group on Climate Change and a committee member of Climate Action 100+, the investor-led group, representing US$54-trillion in assets, that puts pressure on big polluters to bring down their greenhouse gas emissions.

All the big mining companies have set targets to reach net-zero emissions, also known as carbon neutrality, by 2040 or 2050, but those targets refer to the relatively minor Scope 1 and Scope 2 emissions. The former are those produced by a company’s operations that are directly owned; the latter are the emissions that are, in effect, bought by the company, such as those generated during the production of the electricity to run those operations.

Only Glencore of Switzerland and Vale, the Brazilian company that bought Canada’s premier nickel miner, Inco, in 2006, have set precise Scope 3 goals.

Vale is aiming for a 15-per-cent Scope 3 reduction by 2035. Glencore, owner of Canada’s former Falconbridge mining company, has pledged to cut total emissions by 40 per cent by 2035 and hit net zero by 2050 – Scope 3 emissions included. But Glencore’s pledge excludes third-party commodities bought and sold by its global trading business, which account for most of the company’s revenues but only a minority of its earnings.

Glencore has a simple and effective plan to bring down all its emissions: It will deplete its coal mines – that is, not replace their reserves as they are dug out. Analysts think the plan is credible. In an April note, Citi’s mining analysts said they expect Glencore’s coal production to fall 43 per cent by 2035, mainly because Colombia’s Cerrejon mine is reaching the end of its life. “Coal is by far the biggest emissions driver for Glencore,” they said.

In an interview, Glencore CEO Ivan Glasenberg, who is to be replaced in June by the company’s former coal boss, Gary Nagle, said: “Our portfolio of commodities are key to the energy and mobility transition and allow us to take the lead in the sector regarding our net-zero total emissions ambition.”

He said he expects a flurry of mining deals in the next year or two as companies spin off, merge or sell their “dirty” assets, mostly coal, oil and iron ore, so they can emerge as “clean” companies, dominated by the metals that are powering the renewable energy revolution, from wind turbines to Tesla batteries.

That process appeared to have started early this month, when Anglo American announced it would spin off of its African thermal coal business, which will soon trade on the London and Johannesburg exchanges as Thungela Resources. Analysts think Anglo’s move will inspire BHP to accelerate the spinoff or sale of its thermal coal business. “We believe the demerger process will boost Anglo’s overall ESG profile,” RBC Capital Markets said in a note. “There is clear pressure from shareholders for large resources companies to divest thermal coal.” 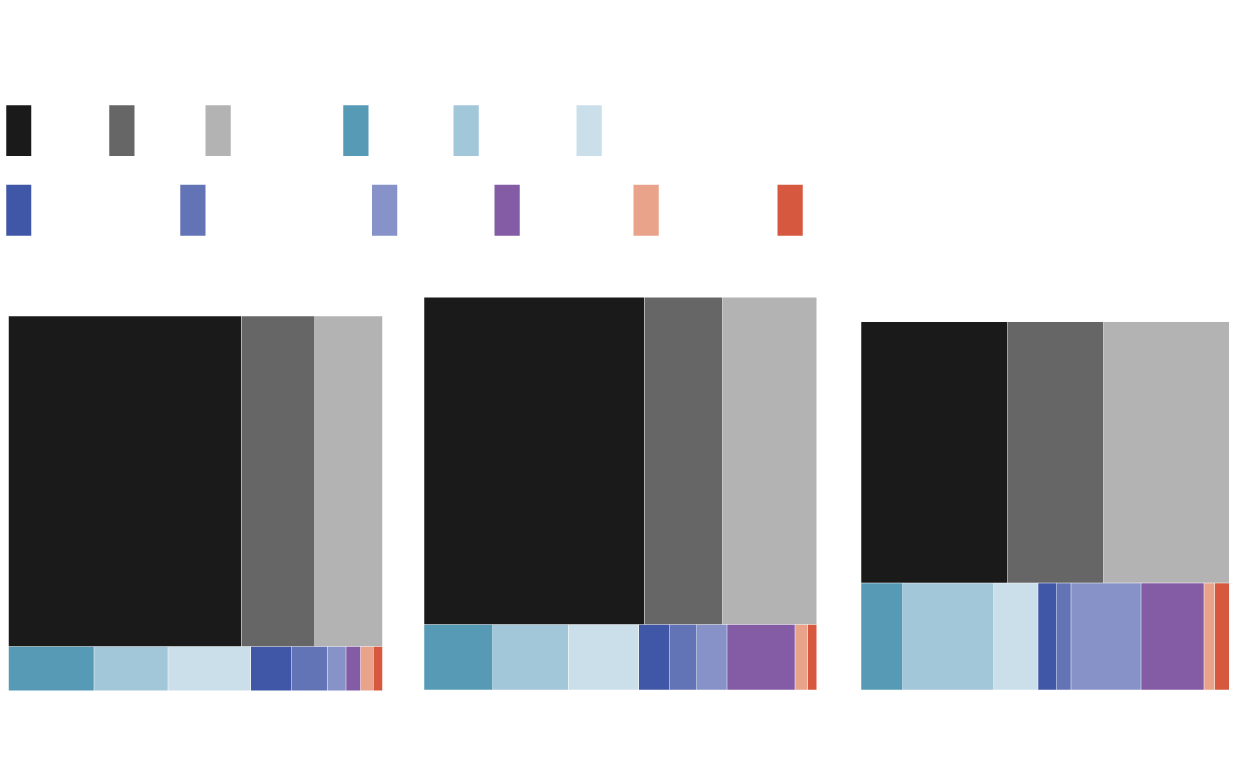 Scenarios for market share for minerals driven by demand shifts,

The implication is that companies that fail to lower their emissions, especially their Scope 3 emissions, over the next decades will get punished by investors, raising their cost of capital in a highly capital-intensive business and thus jeopardizing their ability to stay in business, let alone remain profitable. Already, some oil and mining companies are being kicked out of portfolios, as investors ranging from BlackRock, the world’s biggest asset manager, to Norway’s sovereign wealth fund embrace ESG standards.

Mark Travers, the executive vice-president of base metals at Vale, which includes the Canadian nickel operations, agrees that mining companies that don’t show credible pathways to emission reduction risk alienating the expanding universe of ESG investors. “We don’t have all the answers for Scope 3 yet,” he said. “But we are part of the problem, and part of the solution, and have to push for change. Our goal is to deliver on what ESG investors are demanding.”

Depending on the progress, or lack thereof, in the effort to reduce emissions, companies may be forced to shed entire businesses. “I believe we will all be pushed eventually to look at our portfolios,” Mr. Travers said.

The companies with vast exposure to iron ore, including BHP and Rio Tinto, will have the hardest time crushing their Scope 3 emissions. Iron ore is the key ingredient in steel, the production of which accounts for 8 per cent of global greenhouse gas emissions. Most of their Scope 3 emissions come from steelmakers whose smelters in China, Japan, South Korea and elsewhere are beyond their control. Iron ore is also highly profitable – and CEOs don’t like to give up their cash juggernauts.

To be sure, companies such as BHP and Rio Tinto are trying to get their Scope 3 emissions down – and saying so loudly to try to spare themselves the wrath of the ESG crowd. But they acknowledge that the effort won’t be easy, to the point they are loath to set firm Scope 3 targets.

BHP’s goal is to help its steel-mill customers reduce the carbon intensity of steelmaking by 30 per cent by 2030 and help the ships that carry its commodities cut their carbon output 40 per cent by the same year.

Rio Tinto has been somewhat more skeptical about Scope 3 targets but relented in February after China, Japan and South Korea set net-zero targets for their industries and BHP got into the Scope 3 game. It too intends to help iron-ore customers reduce the carbon intensity of steelmaking by 30 per cent by 2030 while it prays for a technological breakthrough, such as the use of clean hydrogen to produce iron and steel, which will allow it to make a meaningful dent in its Scope 3 emissions by 2050.

In an interview, Peter Toth, Rio Tinto’s group executive for strategy and development, said that cutting Scope 3 emissions “is going to be a joint effort” with players along the company’s value chain. “Our Scope 3 emissions are our customers’ Scope 1 and 2 emissions,” he said, implying that the effort may not be as difficult as advertised.

He noted that reducing Scope 3 emissions is far easier for companies that mine coal – Rio Tinto does not – since that resource can be easily substituted or pushed out. “If you don’t have fossil fuels in your portfolio, it’s hard to set a Scope 3 target,” he said.

With its high exposure to copper, nickel, zinc and cobalt, and waning exposure to coal, Glencore may be an attractive partner for a company seeking a big portfolio of “clean” metals.

Freeport-McMoRan, one of the world’s leading copper producers, also stands out as a potential merger partner. Copper is a vital component of electric cars, and Freeport shares are up 300 per cent in the past year.

It’s an open secret in the industry that all the big mining companies, including Canada’s Teck Resources Ltd., whose portfolio includes copper, metallurgical coal and oil through the Alberta oil sands, are all discussing possible mergers or restructurings that would make their net-zero emissions drive, including Scope 3, faster. The alternative – a portfolio swamped with dirty commodities and an unambitious net-zero plan – might doom them to ever-lower trading values.

“The miners supply the commodities to sectors that are essential for the transition to a low-carbon economy – EVs, wind turbines, solar panels and other technology,” Mr. Glasenberg said. “Some of these companies are trading as high as 70 times EBITDA multiples, yet our sector’s multiples barely reach four times. The disconnect is huge.”