The operator of Montreal’s airports is laying off almost one-third of its employees as demand for air travel shows no sign of returning during the COVID-19 pandemic.

Aéroports de Montréal (ADM), which runs Montreal-Trudeau passenger and Mirabel cargo airports, said on Thursday it will lay off 172 of its 600 employees – 72 will be leaving voluntarily – and halt non-essential construction projects amid a 71-per-cent plunge in passengers that has slashed revenue by $500-million.

Anne-Sophie Hamel, a spokeswoman for ADM, said recent reductions to the federal wage subsidy prompted the layoffs, which she described as temporary.

The airport authority said a 50-per-cent cut to its 2020 investment budget means construction of a light-rail station at Montreal-Trudeau will not begin until governments provide loans.

“These cost-cutting measures come on the heels of the numerous measures ADM adopted in the spring, including a hiring freeze, the cancellation of salary increases, the temporary closure of certain areas of the terminal building, and the closure of one runway at” Montreal-Trudeau, ADM said in a statement.

“Planning for the [Réseau express métropolitain] station at [Montreal-Trudeau] is well underway and the entire project management team is in place. In the event that we have to suspend its construction, it would be a missed opportunity for a long-awaited project to efficiently link our international airport to its city through a green and modern infrastructure,” said Philippe Rainville, chief executive officer of ADM.

Canada’s borders remain closed to most travellers, and there are restrictions on movement between some domestic regions and provinces as public-health authorities try to limit the spread of the virus, which has killed more than 9,000 and infected more than 127,000 in Canada.

The world’s airlines saw passenger revenue fall by 87 per cent in June, from a year ago, amid the pandemic that has led to the cancellation of 7.5 million flights, the International Air Transport Association (IATA) said. Even as airlines parked thousands of planes and laid off much of their work forces, the planes they continue to fly are barely half full. The average flight’s load factor, an industry measure of seats sold, was 58 per cent in June, IATA said.

The domestic travel industry, led by Air Canada, has been vocal in its opposition to the travel restrictions, calling for an industry bailout, looser quarantine rules and a gradual reopening of borders to visitors from countries where the pandemic is under control. However, summer upticks of infections in such places as Spain and France and the uncontrolled spread in the United States signal Canada’s measures are unlikely to be loosened in the near future. The federal governments in Canada and the United States recently agreed to extend the shutdown of the shared border until Sept. 21.

“The postponement of Canadian border opening dates and the maintenance of a mandatory quarantine lead us to believe that there will not be a recovery in air traffic until the second quarter of 2021,” Mr. Rainville said. “Obviously, this situation represents the worst-case scenario and is putting enormous financial pressure on our organization. Our almost non-existent revenues are forcing us to make heart-wrenching choices that we have tried to put off for as long as possible. Today, we have to say goodbye to a part of our winning team.”

ADM is a non-profit corporation that leases the airports from the federal government. At the outset of the pandemic, Ottawa said it would waive rents at ADM and 20 other airport authorities.

The Greater Toronto Airports Authority in July cut 27 per cent of its work force, or 500 jobs, as passenger traffic at Toronto Pearson, Canada’s biggest airport, fell to levels not seen since 1996.

Officials try to calm nerves and reassure parents as Montreal-area kids back in school
August 27, 2020 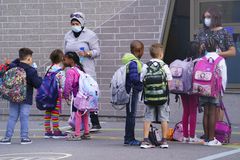