Vention Inc., a rapidly growing Montreal startup that is helping industrial manufacturers speed up the pace of factory automation, has raised $38-million in venture capital led by Georgian Partners.

Its customers – engineers at more than 1,000 factories owned by companies including BMW, GE, Tesla, Siemens, Bombardier and Universal Robots – create, design and order custom equipment used in their production lines, including test benches, robot work stations, assembly lines and heat exchangers. They buy and receive the materials from Vention, complete with assembly instructions and within days, saving months off the typical process.

Vention has an inventory of about 600 unique parts as well as more than 1,100 ready-made product designs – many contributed by customers – that buyers can customize. It is also increasingly adding outside parts suppliers to its platform, providing a new sales channel while allowing Vention to offer increasingly complex products, Mr. Lacroix said.

“The fact that they’ve taken this process that can take months and turned it into something that is self-serve is truly disruptive,” said Ajay Agarwal, a partner with Bain Capital, which led the company’s previous, $17-million venture-capital round in early 2019 and is backing the latest financing, again alongside seed investor White Star Capital.

The financing is believed to value Vention at more than US$150-million, according a source that The Globe and Mail is not identifying because they were not authorized to disclose the information.

Vention has made quick strides, increasing revenue last year by nearly 400 per cent after expanding by 570 per cent in 2018, Mr. Lacroix said. The pandemic will slow the expansion of sales, believed to be running at a rate of more than US$10-million, this year, but they should at least double, Mr. Lacroix said.

"If we just become a unicorn [a venture capital-backed valued at US$1-billion] it would be a bit of a failure on our part,” given the US$100-billion-plus size of the estimated market size and the company’s potential, Mr. Lacroix said.

Investors describe Mr. Lacroix as a driven entrepreneur who has consistently delivered. “Etienne had an incredibly clear vision of what Vention was going to do,” Georgian partner Emily Walsh said. “It has been executing on that vision since day one.”

Mr. Agarwal said Vention’s main challenge is to build awareness. "The reality is 99 per cent of the market has never heard of them.”

Vention is one of a slew of Canadian startups that have raised hundreds of millions of dollars combined in outside capital in recent years to bring technological innovations to factory operations, including Waterloo’s Clearpath Robotics Inc. and ATTAbotics Inc. of Calgary. They are helping to increasingly automate factories, reduce costs and increase operational agility so companies can more quickly adapt to market changes.

But they are also contributing to growing concerns about disappearing jobs as machines increasingly take over work done by humans. The pandemic’s disruptive impact on the economy will likely hasten that, Ms. Walsh said. “The current climate will push even more factories to look for the least human labour involved in these processes,” she said. Vention “fits into this next wave of how factories will operate, how parts suppliers are going to need to sell.”

Sam Schmitz, a manufacturing engineer with 3D printer maker Formlabs Inc. near Boston, said the combination of materials costs and staff time savings make Vention a much cheaper alternative than the typical process of plant planners designing and building their own pieces from scratch or bringing in systems-integration providers – typically regional automation experts – to do the job.

“Vention is definitely disrupting this industry,” Mr. Schmitz said, adding he had placed dozens of orders for custom pieces to help test and build printers, spending more than US$10,000 in total. “It’s essentially challenging the model of the entire ecosystem.” 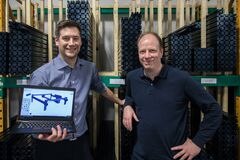