Outside Boeing Co.’s giant Renton factory in Seattle’s southeast suburbs, where 12,000 employees have been assembling more 737 Max passenger jets than any other model in the company’s history, the mood was grim just before noon on Wednesday as U.S. President Donald Trump announced the planes would be grounded in the United States.

Workers arriving and departing through Gate D-15 for one of three daily shift changes, and others taking smoke breaks, scrolled through news stories on their phones. There was surprise. There was some anger. It was a fresh torrent of emotion, on top of the upheavals since the second deadly crash of a 737 Max 8, in Ethiopia three days earlier, which killed all 157 passengers on board.

"There’s a pall over the place,” said one test mechanic. “Everybody’s obviously depressed.”

The company has said little officially since the crash. A Boeing spokesman said the company will continue production of the 737 Max while the planes are grounded, but cannot deliver them to customers.

The Globe spoke to several employees at the Renton plant, and agreed to grant them anonymity because they were not authorized to speak publicly and worried about their job security. “The mood is sombre. People are taking a lot of personal responsibility,” said one man, who works on wings and has been at Boeing for two decades.

After the first 737 Max 8 crash in Indonesia last October, which killed 189 people, there was shock. Fatal crashes were more common in the early days of commercial aviation more than half a century ago than they are now, and they aren’t something workers at the factory have experienced in recent years.

The now-worldwide grounding of the 737 Max fleet has been a huge blow. “Two in a row,” said the two-decade veteran. He paused and took a drag of his cigarette. “I’ve been in the program for a long time, many years, never had one go down like that,” referring to the crash in Indonesia.

“To have two in six months, it’s just, it’s just, a lot of people are having issues with that,” he said.

Stress has clearly increased in recent days. Most people declined interviews. As the two-decade veteran spoke, a co-worker interrupted and said, “We have to be careful here. They have protocol. They’ll terminate us quicker than you can blink an eye.”

“Those planes have our name on it,” the veteran said. “We take a lot of pride in what we do. We do high-quality work.” He’s spent his entire career in Renton, building 737s, and this is the worst it’s felt. “The public trust in us,” he said, finishing his cigarette, “seems to be wavering.”

The U.S. Navy constructed an airplane factory here on the south end of Lake Washington in 1941. The site was idle after the Second World War, but in the early 1950s, Boeing began building commercial airliners in Renton.

In 1967, the first 737 took off from Boeing Field in Seattle, where it was made, but the company shifted production to Renton in 1970. The planes have been built here ever since.

Of the 12,000 workers at the plant, 7,182 are members of the International Association of Machinists and Aerospace Workers. Strong demand for the 737 Max, and new methods to build the planes, have led to an unprecedented rate of production. Boeing has built and delivered close to 400 and has orders for about 4,700 more.

It takes 10 days to build a 737 Max. Work at the factory, with three daily shifts, never stops. On a typical overnight shift, two almost-ready 737 Max jets roll out of the factory. The workers call them “children.”

In 2017, when the Max was certified and started to fly commercially, Boeing was making 42 new planes a month. It increased the rate to 52 last year, and was aiming to boost it to 57 a month this year.

Last summer, unfinished planes piled up. The Renton Municipal Airport is next to the factory and Boeing uses it as a parking lot. More than 50 new planes were at the airport last summer. This past week, there were about two dozen, three made for Air Canada among them.

The company hasn’t announced any plans to slow production. “We’re used to the pace,” said the test mechanic on a smoke break on Wednesday.

He was with two coworkers across from Gate D-15. Behind the fence were two new fuselages waiting outside on long dollies.

The test mechanic was upset with Trump, who Tuesday tweeted that new planes are “becoming far too complex for fly,” and on Wednesday announced the Max grounding. “He doesn’t know anything about aviation,” the mechanic said. “The 737 is tried and true. It’s the best-selling airplane for a reason. Safety. It’s over-engineered. It’s everything that you want your family to be in.”

“For him to come out, not knowing what he’s talking about, it’s not good,” the mechanic added. “We all feel for the families that have lost loved ones but we’re going to keep doing what we do and that’s build quality airplanes.”

One of the mechanic’s coworkers, wearing a Seattle Mariners baseball cap, expressed sorrow for the dead in the two crashes. “We feel for all those people,” he said. “If my mom was on that jet, I would be angry. I would want something done. I’d want to know why. Why?”

The second worker was moved to Renton from Boeing’s factory north of Seattle in Everett to help with fill strong demand for the 737 Max. He said the site is well run. “All lines are set up to move. Every day, smooth.”

At 2 p.m., a recalled Boeing retiree was among the workers walking to their cars after shift change. The retiree had put in three decades at Everett. But because Renton is so busy, he got a call last fall to come back to work until this spring. It was the first time since 2012 that Boeing increased its workforce. In Washington State, the company has about 70,000 workers, an increase of 4,000 from 2017.

“It’s a really good crew of people down here,” said the man. He delivers various parts to the assembly line. “You don’t work past your capacity,” he said. “Everybody gets the job done.”

Between the municipal airport and the factory, there is a small river and a walking path. Ed Nye, who retired from Boeing in 2007, was on a morning walk on Wednesday. He had been a field-support analyst at the company.

Mr. Nye defended the 737 Max: “They’re good airplanes.” Like many current employees, he expressed muted confidence, and believes the planes are safe. “There’s not going to be any impact, in the long run,” he said.

“Boeing’s been in business for a hell of a long time,” said Mr. Nye. “All these 5,000 they’ve got on order, airlines still want them.”

What air travellers can do about compensation, travel changes after Boeing 737 Max 8 grounded
March 15, 2019 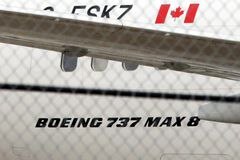 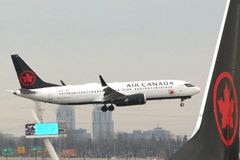 Opinion
Response to Ethiopian Airlines crash was not the finest hour for Boeing or the FAA Subscriber content
March 15, 2019 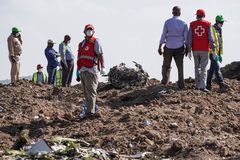