Africa’s biggest foreign investment project is in severe jeopardy after hundreds of Islamist rebels killed dozens of people and captured a key town in northeastern Mozambique near a planned US$60-billion offshore gas development.

The insurgents, affiliated with Islamic State but also motivated by long-standing local economic grievances, stormed the coastal town of Palma and forced thousands of people to flee last weekend in a chaotic exodus on airplanes, helicopters, buses and a haphazard flotilla of boats and ferries.

Many fled into the surrounding bush to await rescue, while thousands took shelter inside the construction site of the liquefied natural gas plant on the Afungi Peninsula, a few kilometres from the town. Foreign workers were among those besieged in a luxury hotel, and many were reportedly killed when a convoy of cars tried to escape from the hotel.

Mozambique’s military claimed to have recaptured the town this week, but a group of visiting journalists came under fire from the militants Tuesday after the government flew them into Palma for a brief visit.

French multinational Total SA, one of the biggest investors in the gas project, announced last week that it would resume construction at its site near Palma after a three-month suspension owing to security concerns and an earlier evacuation of its staff. But after the latest assault on the town, Total swiftly suspended its operations again.

United Nations officials reported Wednesday night that more than 8,100 people had fled Palma to other districts in northern Mozambique. Many of those who arrived in Afungi had fled on foot and hid in the bush for days. Some had life-threatening injuries, according to a statement by Médecins sans frontières (MSF). “They are terrified,” the medical group said. “Most are in shock and are dehydrated and hungry.”

The LNG development, led by Total and other investors such as Exxon Mobil Corp. and Italian company Eni SpA, was expected to transform Mozambique’s impoverished economy and create a booming city of 150,000 people on the remote Afungi Peninsula, on the Indian Ocean near the border with Tanzania.

South Africa’s Standard Bank helped finance the project and estimated the development could create 40,000 construction jobs and US$128-billion in capital investment across Mozambique. It was envisioned as the spark that would turn Mozambique into the world’s fourth- or fifth-biggest producer of liquefied natural gas, helping it become a middle-income country with a 10-per-cent annual growth rate.

Instead, the development is now expected to be shelved for years, if not completely killed, analysts say.

“The remobilization of the project that was envisaged at the beginning of the week is obviously now suspended,” Total said in a statement Saturday. “Total has decided to reduce to a strict minimum level the work force on the Afungi site.”

There has been widespread international concern about the growing insurgency in northern Mozambique, but only a limited amount of military aid has arrived in the region. 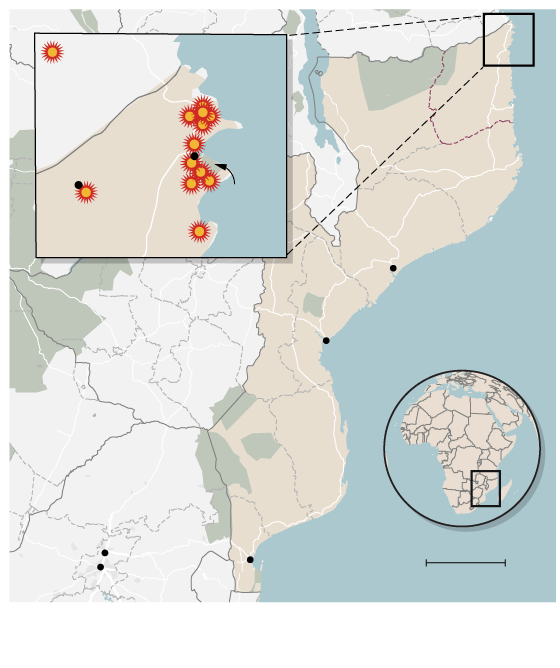 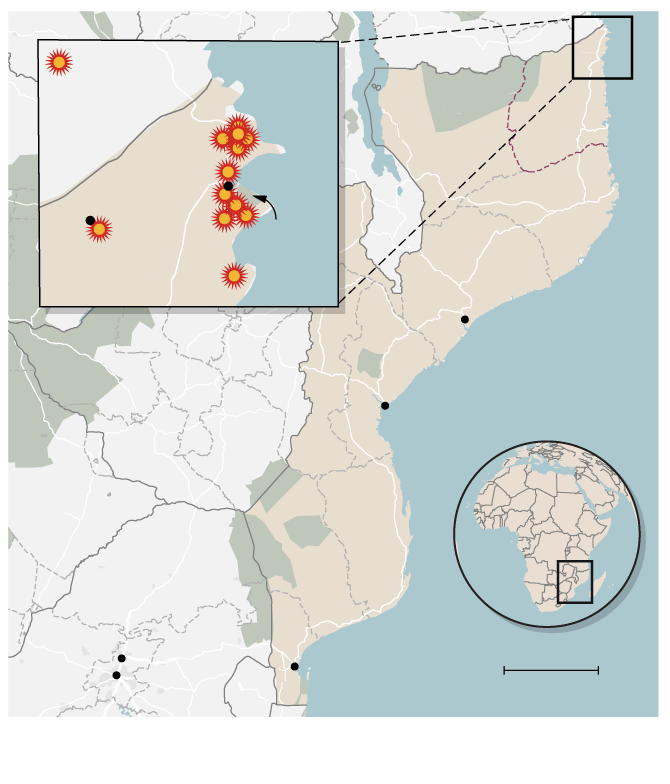 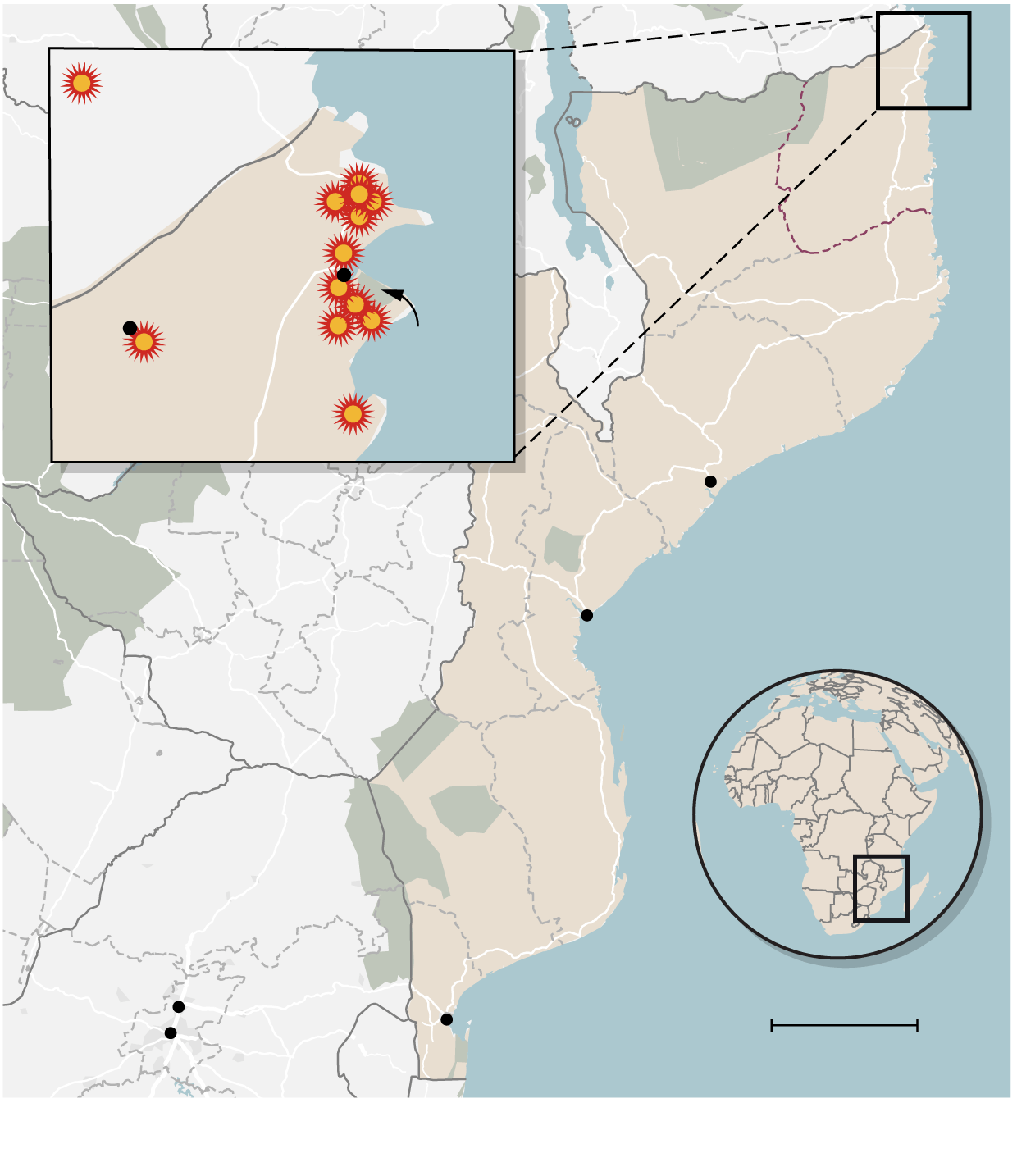 Portugal announced Tuesday that it would send about 60 soldiers to Mozambique to help train the country’s special forces. The United States had earlier sent a unit of its own special forces on a training mission in Mozambique, and a South African private military contractor has been active in the region after a failed effort by a Russian military contractor. But none of this is seen as sufficient to reverse the gains of the insurgents.

Mozambique’s ruling party, Frelimo, and President Filipe Nyusi have tried to minimize the issue. “Let us not lose focus; let us not be disturbed,” Mr. Nyusi told journalists Wednesday in the capital, Maputo. He dismissed the attack on Palma as “not the biggest.”

But independent analysts said the devastating attack will have a huge impact. “Mozambique is waking up to the realization that billions of dollars flowing into the state budget and local pockets was only a dream,” said Joseph Hanlon, a Mozambique expert at the Open University in Britain, in a report this week.

“Frelimo bet the country on that dream,” he said. “The whole gas gamble was bet on a promise of security, and Nyusi – and Mozambique – lost the bet.” 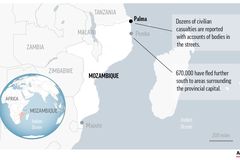 Children as young as 11 among victims of extremist violence in Mozambique, aid groups say
March 16, 2021 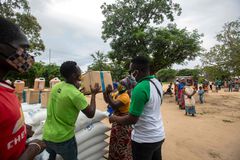