David MilsteadInstitutional Investment Reporter
Published May 7, 2020 Updated May 7, 2020
For Subscribers
Comments
Text Size
Please log in to listen to this story. Also available in French and Mandarin. Log In Create Free Account

U.S. luxury retailer Neiman Marcus Group Inc. filed for Chapter 11 bankruptcy protection on Thursday with plans for a restructuring that would wipe out the equity of its owners – including the Canada Pension Plan Investment Board.

The insolvency filing is a warning sign of more trouble to come for the department-store industry, which was already struggling before the COVID-19 virus waylaid the global economy. Even before the pandemic, Dallas-based Neiman Marcus was one of retail’s most troubled players, largely because of the way CPPIB structured its 2013 acquisition of the company.

CPPIB partnered with Los Angeles-based Ares Management to buy Neiman Marcus, which also owns Bergdorf Goodman and the Last Call clearance store chain, for US$6-billion. But it was a leveraged buyout, so most of the money wasn’t cash from CPPIB’s coffers. The pension fund chipped in just US$690-million, and the bulk of the purchase was made with debt. Neiman Marcus, not CPPIB and Ares, was the borrower.

Leveraged buyouts are a large part of CPPIB’s private equity investing program. The pension fund had nearly $100-billion of its $420-billion portfolio in private equity at Dec. 31. Such investors typically use debt as a significant part of the financing for the companies they purchase.

Leverage works great when profits of an acquired company are rising, but it can be deadly when things go in reverse. Neiman Marcus, under its CPPIB ownership, couldn’t generate enough cash to cover its interest payments.

Over the five fiscal years ended in the summer of 2018, according to S&P Global Market Intelligence, the chain generated about US$1.28-billion in free cash flow from its operations, but spent nearly all of it, US$1.13-billion, on capital expenditures, such as store improvements and new locations. That left just US$150-million, but Neiman Marcus also had to make US$1.25-billion in interest payments.

According to S&P, Neiman Marcus’s US$5-billion in debt was 12 times its its annual operating earnings, as measured by EBITDA (earnings before interest, taxes, depreciation and amortization). The ratio is commonly used to evaluate a company’s ability to pay its obligations, and is 3.2 at Macy’s Inc. and 2.6 at luxury retailer Nordstrom.

A total loss on Neiman Marcus actually does not make a big dent in the gargantuan CPPIB. The US$690-million amounts to less than one-quarter of one percentage point of the plan’s $420-billion in assets at the end of last year.

The bankruptcy, however, is a higher-profile misfire than most of CPPIB’s investment errors.

In 2013, André Bourbonnais, then CPPIB’s private-investment head, told a crowd at a breakfast meeting in Dallas that when people congratulated him about Neiman Marcus, he would reply: “We’re really happy about the deal, but call me in five years when we’ve tripled our investment,” according to a report in the Dallas Morning News.

Neiman Marcus’s previous owners – two leveraged-buyout firms that bought the chain in 2005 – had also tried to operate the company with a large debt load. They had been unable to execute the chain’s growth plans because of the recession, Mr. Bourbonnais told the audience. (Mr. Bourbonnais left CPPIB in 2015 to become CEO of the federal Public Sector Pension Investment Board and is now global head of BlackRock Long Term Private Capital. He could not be reached for comment Thursday by a BlackRock spokeswoman.)

However, by 2018 - the beginning of the five-to-seven-year investment time horizon Mr. Bourbonnais cited - the company had cancelled plans to go public, abandoned efforts to sell itself to other private equity buyers and heard the debt rating agencies tell the market that a balance sheet restructuring was inevitable. Iconic brand or no, Neiman Marcus had difficulty with the secular shift in retail from the mall to online.

Neiman Marcus CEO Geoffroy van Raemdonck, a former Ralph Lauren executive who took over that year, said in a statement Thursday that Neiman Marcus had been "making solid progress on our journey to long-term profitable and sustainable growth.” Then, the virus hit.

The company closed its 67 stores, operating under the Neiman Marcus, Bergdorf Goodman and Last Call banners, on March 18 and it furloughed almost all of its 14,000 employees on March 30. It has reopened 10 stores with curbside service, but others will remain closed through May 31, the company said.

Neiman Marcus hopes to emerge from bankruptcy protection this fall. Creditors rank ahead of shareholders in insolvency proceedings, and there is often nothing left over for equity holders. Thursday’s bankruptcy protection announcement included a Restructuring Support Agreement with creditors representing more than two-thirds of the company’s outstanding debt.

Once Neiman Marcus gets out of bankruptcy protection, it expects to eliminate about US$4-billion of debt, extend the maturities of the remainder of its borrowings and hand majority ownership of the company over to its current creditors, wiping out existing shareholders in the process. 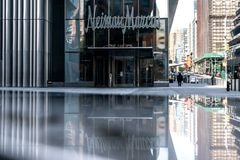 Neiman Marcus to file for bankruptcy as soon as this week, sources say
Subscriber content
April 19, 2020 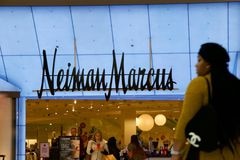