The new chief executive of Lululemon Athletica Inc. says he plans to cash in on the momentum at the yoga-wear chain by tapping into the “spirit of a disruptive innovator” it shares with Sephora − the beauty retailer where he was previously a leader.

Calvin McDonald, a Canadian who became chief executive officer of Vancouver-based Lululemon on Aug. 20, said the company shares a number of similarities with Sephora in culture and values, enabling him to take lessons from his previous retailing stint to propel the business further.

“There’s this notion or spirit of a disruptive innovator,” Mr. McDonald said Thursday on his first Lululemon analyst conference call after the company reported strong second-quarter results and raised its full-year sales and profit outlook. “At Lululemon, it’s really through the entire organization. … It allows us to approach problems differently and to think differently, and it’s a very strong similarity.”

A former CEO of Sears Canada Inc. and, before that, an executive at Canadian grocery giant Loblaw Cos. Ltd., Mr. McDonald joins high-end Lululemon at a time when it is enjoying a robust recovery after having struggled through some setbacks in previous years. The new CEO will now face the challenge of having to meet and exceed high expectations and find ways to keep the business growing – and standing out from rivals.

Lululemon’s second-quarter results underlined the progress it continues to make despite tougher competition as others try to copy what it’s doing, often at cheaper prices.

In the three months ended July 29, the retailer’s profit almost doubled to US$95.8-million or 71 cents a share − compared with analyst estimates of US$66.5 million or 49 cents − and up from US$48.7-million or 36 cents a share a year earlier. Revenue rose to US$723.5-million from US$581-million a year ago. Analysts at Thomson Reuters IBES had expected US$667.94-million.

Lululemon released its results after the markets closed but, in after-hours trading, the company’s stock price jumped almost 8 per cent or US$10.68 to $147.68 by about 6 p.m. Over the past year, the retailer’s shares have soared roughly 140 per cent.

Glenn Murphy, chairman of Lululemon, said the company’s quarterly gains were widespread among its various product categories and geographies. “It was just a very impressive second-quarter result for Lululemon.”

Mr. McDonald, a triathlete who said he has been a loyal Luluemon customer for years, replaces former CEO Laurent Potdevin, who stepped down abruptly in February when the retailer said only that he “fell short” of its standards of conduct.Lululemon didn’t confirm reports that Mr. Potdevin had engaged in a relationship with a former employee.

The resignation came at the height of the #MeToo movement, which focused on the issue of the treatment of women in the workplace and became a prominent theme in business last fall, with a number of high-profile men having stepped down since then because of allegations of misconduct.

Still, the choice of Mr. McDonald as CEO has got a strong vote of confidence from industry watchers. The appointment “appears to be a solid hire for the company,” John Kernan, a retail analyst at Cowen & Co., said last month.

“As an avid triathlete, Mr. McDonald clearly has a competitive streak and focus on health and wellness,” Mr. Kernan noted.

Mr. McDonald told analysts that being Lululemon CEO was his dream job. He said he will take time to meet and listen to employees across the company before finalizing his corporate blueprint for the coming years.

The retailer recovered from its major crisis in 2013 when it had to pull its staple black women’s pants because they were too see-through, forcing it to beef up its supply chain and executive ranks.

Now sales of women’s pants are again one of the retailer’s strongest areas, with those sales at stores open a year or more up 30 per cent in the second quarter.

Overall same-store sales grew 19 per cent on a constant dollar basis, including 10 per cent in brick-and-mortar stores and 47 per cent in its e-commerce.

Lululemon is expanding into new categories, including men’s wear, while adding more international stores and improving its core North American performance and e-commerce. In 2016, under Mr. Potdevin, it set an ambitious five-year goal to double revenues to US$4-billion and to boost men’s wear sales to US$1 billion from about US$216-million in 2013. Stuart Haselden, chief operating officer at Lululemon said Thursday it is tracking to meet or exceed its US$4 billion revenue goal with its men’s wear and e-commerce businesses “effectively ahead of schedule.” And executives said Lululemon’s positive momentum was continuing in its third quarter. 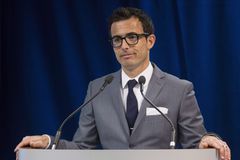