Canada’s largest grocer is launching a driverless-technology test for delivery trucks that carry products to its stores, as it works to speed up its supply chain to keep up with growing e-commerce demand.

On Monday, Loblaw Companies Ltd. Loblaws announced a multiyear partnership with startup Gatik, based in Palo Alto, Calif., to deploy five trucks for the test in the Greater Toronto Area.

This does not mean robots will be bringing groceries to Canadians’ homes any time soon. The bulk of Loblaw’s e-commerce customers use its PC Express “click-and-collect” service to pick up online orders at stores. What Loblaw is looking to do – and Gatik’s strategic focus – is to make the “middle-mile” journey of orders from hub locations to various pickup points, more efficient.

“The [retail] industry very often talks about last-mile [delivery to customers’ homes], and not so much middle mile … but it is a huge opportunity,” Lauren Steinberg, senior vice-president of Loblaw Digital, said in an interview. “The lens that we are looking through, for this pilot, is to enhance our supply chain elasticity.”

While a lot of big promises have been made about the future of driverless cars, the technology has not yet gone mainstream. Gatik, which also launched a test with Walmart Inc. Walmart in Arkansas last year, focuses on short, fixed routes. According to the company, a more predictable route is simpler to program for autonomous technology, than a situation such as a driverless taxi that has to map a route in real time.

A “safety driver” is also currently required to be in the vehicle in Ontario. In more than 30,000 test deliveries in North America so far, Gatik says it has not had an accident. In some cases, months go by when a safety driver has not had to override a truck’s autonomous system, the company says. The ultimate goal is to go driverless, and the company is talking to policy makers at state and provincial levels about future regulations that could allow for that.

The old retail infrastructure – storing products at centralized warehouses – has had to evolve to keep up with the rise of e-commerce. Many retailers are now using what are known as “hub-and-spoke” systems, to allow orders to be filled closer to where the customer is, and transported to a pickup point in a shorter amount of time.

Last year, Loblaw announced it would convert part of a Great Canadian Superstore in Toronto into a “micro-fulfilment centre.” That is now up and running, using some automation to help staff fill hundreds of e-commerce orders every day, for pickup at stores around the city.

One Gatik truck did a nine-month test run from that location to Loblaw’s head office this year. Starting in January, the five trucks will each travel more than 300 kilometres a day along predetermined routes, starting at that same fulfilment centre.

During the COVID-19 pandemic, Gatik has seen the demand on its test trucks increase significantly.

Gatik also announced on Monday that it has closed a US$25-million Series A funding round, led by Wittington Ventures – an investment company owned by Loblaw’s controlling shareholders, the Weston family – and Innovation Endeavors.

Loblaw’s parent company was also one of the first backers of Dragon’s Den star Arlene Dickinson’s District Ventures $100-million venture fund, which invests in startups in the food and beverage space.

“Wittington is interested in investing in technology-oriented companies that are related to any of their operating businesses, retail being a key part of it,” said Wittington Ventures managing partner Jim Orlando.

“... I view it as a two-way street. We’re very interested in understanding problems or opportunities that technology companies can help them with; but on the flipside, we’re bringing them technologies to help them seize these opportunities or solve these problems and get to the future faster.”

Gatik does not actually build the vehicles, but programs the automation technology that powers them. The Toronto test will help the company improve how that technology responds to various conditions, such as winter weather.

The company also partners with other retailers, but has only announced its work with Loblaw and Walmart so far. Gatik makes money by charging retailers a fixed fee per vehicle a day, with some limits on the distances they can travel; financial terms were not disclosed and vary among clients.

Once they are permitted to operate without a driver, the vehicles will be programmed to pull over whenever there is a unique situation they have not been trained for – such as a flat tire or construction barriers on the road – to allow a remote supervisor to approve the next course of action. Mr. Narang estimated it will be 30 per cent to 40-per-cent cheaper for the retailer to use driverless trucks, which will also speed up the fulfilment of online orders.

“We know that online grocery is not going backwards,” Loblaw’s Ms. Steinberg said. “The overall penetration of online grocery will continue to grow. So for us, it’s really ensuring that we can meet the increased demand.” 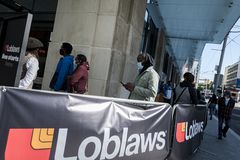 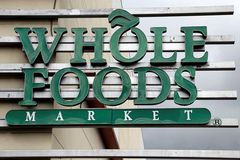 Unifor expands Loblaws battle beyond Newfoundland, where 1,400 Dominion workers are on strike
November 4, 2020 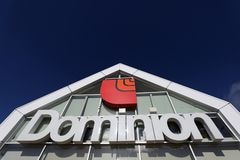