Norwegian Air said on Wednesday it will seek compensation from plane maker Boeing for costs and lost revenue after grounding its fleet of 737 MAX 8 aircraft in the wake of the Ethiopian Airlines crash.

“We expect Boeing to take this bill,” Norwegian said in an e-mailed statement.

The Oslo-based airline has 18 ‘MAX’ passenger jets in its 163-aircraft fleet. European regulators on Tuesday grounded the aircraft following Sunday’s crash of a similar plane in Ethiopia, which killed 157 people and was the second crash involving that type of plane since October.

Boeing Chief Executive Dennis Muilenburg said on Monday that he was confident in the safety of the 737 MAX in an e-mail to employees, which was seen by Reuters.

Industry sources, however, said the plane maker faces big claims after the crash.

Norwegian has bet heavily on the ‘MAX’ to become its aircraft of choice for short- and medium-range flights in coming years as the low-cost carrier seeks to boost its fuel efficiency and cut the cost of flying.

“What happens next is in the hands of European aviation authorities. But we hope and expect that our MAXes will be airborne soon,” Norwegian Air’s founder and Chief Executive Bjoern Kjos said in a video recording released on social media.

“Many have asked questions about how this affects our financial situation. It’s quite obvious that we will not take the cost related to the new aircraft that we have to park temporarily. We will send this bill to those who produce this aircraft,” he added.

Idle planes will add to pressures on the airline, which is making losses amid intense competition at a time when several smaller European competitors have gone out of business.

The carrier has raised 3 billion Norwegian crowns ($348 million) from shareholders in recent months and said it would cut costs as it tries to regain profitability this year.

Opinion: Fallout from second 737 Max 8 crash won’t be easy for Boeing, or its clients, to ignore

“If this situation gets solved within the next fortnight, this will not be very serious for Norwegian,” said analyst Preben Rasch-Olsen at brokerage Carnegie, adding that seasonally low demand in March likely leaves spare capacity.

“The little extra costs they are incurring, they can probably get that covered by Boeing,” Rasch-Olsen said.

“But if this situation continues into the Easter holidays, or May and June, then it is a problem. They (will) need to get in new planes. And then comes the costs.”

Europeans tend to book their summer holidays in May, so the grounding may not yet affect bookings for the peak season for the airline industry, the analyst said.

Meanwhile, Norwegian was maintaining its order for more aircraft of the same type from Boeing, spokesman Lasse Sandaker-Nielsen said.

Norwegian is expected to take delivery of dozens more of the ’MAX’ in coming years, raising the overall number to more than 70 by year-end 2021, according to recent company announcements.

Shares in the airline have now dropped 10 per cent this week as investors worried about the impact of the Ethiopian crash.

They fell by 4.8 per cent in early trade on Wednesday but partly recovered to trade down just 0.7 per cent by 1008 GMT.

Norwegian cancelled some flights on Tuesday, and on Wednesday it cancelled at least three dozen departures, its website showed, most of which were due to fly from airports in Oslo, Stockholm and other Nordic cities.

The airline was booking passengers on to other flights and using other types of planes from its fleet to help fill the gaps.

“We are able to accommodate most intra-European passengers by these efforts but are still working on other options for our passengers travelling between Ireland and the U.S.,” Norwegian said. 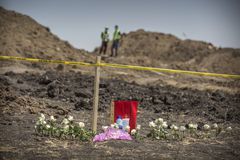