The OECD has warned that “continued and deepening trade policy tensions” have created an “increasingly fragile and uncertain” outlook for the world economy as it slashed its global growth projections.

“Escalating trade policy tensions are taking an increasing toll on confidence and investment, adding to policy uncertainty, weighing on risk sentiment in financial markets, and endangering future growth prospects,” the Organization for Economic Co-operation and Development said in its Interim Economic Outlook, published on Wednesday.

“Collective effort is urgent to halt the build-up of trade-distorting tariffs and subsidies, and to restore a transparent and predictable rules-based system that encourages businesses to invest,” it said.

The international economic policy and research institution forecast that the world economy will grow by just 2.9 per cent this year, down from 3.6 per cent last year and a reduction of 0.3 percentage points from its May forecast. That would mark the slowest global growth since the 2008-09 financial crisis. It doesn’t expect 2020 will look much better, projecting expansion of just 3 per cent next year, down from 3.4 per cent in May.

The OECD said the continuing U.S.-China trade dispute has pummelled global export demand, stifled manufacturing activity and slowed business investment to a crawl. It characterized global trade as “exceptionally weak,” noting that trade volumes declined in the second quarter. It added that uncertainty surrounding Brexit and the recent drone strikes on Saudi oil facilities are adding to already elevated instability.

Canada was one of the few bright spots among advanced economies in the updated outlook, as the OECD increased its 2019 growth estimate to 1.5 per cent from 1.3 per cent, reflecting the country’s much stronger-than-expected economy in the second quarter. But the OECD slashed its growth projection for 2020 to 1.6 per cent from 2 per cent, as the impact from global trade woes sinks in.

While the OECD report applauded Canada’s “strong job and real wage growth” as a key source of economic strength over this year and next, it warned that the deteriorating global trade environment will weigh on exports and business investment.

Toronto-Dominion Bank also trimmed its growth forecasts on Wednesday – coincidentally, matching the OECD forecasts for Canada and the world. Beata Caranci, chief economist at TD, said that while Canada’s economy over all hasn’t yet suffered major damage from the trade war and the global slowdown, the cracks have begun to show.

“It’s evident that things like manufacturing have not been doing well. It mirrors what we’re seeing in the U.S. and globally,” Ms. Caranci said. “We’ve seen it in [slowing] business investment, too.”

It estimated that the tariffs imposed by the United States and China against each other, if they remain in place, would reduce global gross domestic product by about 0.6 per cent over the next two years combined. The impact would be greater on China, with a drag on its GDP of about 1 per cent, and on the United States, with an estimated hit of about 0.7 per cent.

“China and the United States would be most affected by these shocks, but all economies are adversely affected by rising uncertainty, with business investment impacted severely in the major economies,” the report said.

And it warned that things could get worse.

Saudi King replaces energy minister with one of his sons
September 8, 2019 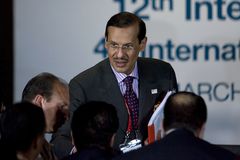