Coronavirus information
The Zero Canada Project provides resources to help you make the most of staying home.
Visit the hub
Emma GraneyEnergy reporter
Published April 20, 2020 Updated April 20, 2020
For Subscribers
Comments
Please log in to listen to this story. Also available in French and Mandarin. Log In Create Free Account

The market price for West Texas Intermediate crude oil plunged deep into negative pricing for the first time in history on Monday, closing at minus US$37.63 as the fallout from the spread of the coronavirus leaves the world with more oil than it needs and nowhere to keep it.

The destruction of global demand and a supply glut has crude sloshing toward the tops of North American storage tanks. Monday’s turmoil put the market in an extraordinary position in which desperate investors who agreed in futures contracts months ago to pay a set price for crude in May so they could resell it at a profit, would now have to pay buyers to take it off their hands or find a place to store it.

Worldwide fuel consumption has fallen by a third as billions of people around the world stay home. Although the Organization of the Petroleum Exporting Countries (OPEC) and allies agreed last week to a 9.7 million barrel a day (b/d) production cut, it won’t take effect until May – too late to prevent a massive storage glut.

When a futures contract expires, traders must decide whether to take delivery of the oil to resell or roll their positions into another futures contract for a later month. Usually, this process is relatively uncomplicated, but now, investors have very few customers for the oil.

Refineries are processing less crude, so traders have hired vessels just to anchor them and fill them with the excess oil. According to Reuters, a record 160 million barrels is sitting in tankers around the world.

“I’ve never seen anything like it,” Jackie Forrest, the senior director of research at Calgary-based ARC Energy Research Institute, told The Globe and Mail.

Canadian regulators do not publicly release storage capacity information. However, storage in Western Canada was close to half full on March 27, according to the most recent data from analysts Genscape Inc.

A larger problem is at the storage hub in Cushing, Okla., where U.S. oil barrels bought in the futures market usually are delivered. Four weeks ago, the hub was half full – now it is 69 per cent full, according to U.S. Energy Department data.

Canadian analysts keep a close eye on Cushing; Ms. Forrest said the shortage of coastal access for Western Canadian crude means much of the product can eventually end up there.

“Storage is getting full everywhere and that’s why we’re seeing the [price] collapse. There’s no place to put it," said Martin Pelletier, portfolio manager at TriVest Wealth Counsel Ltd. in Calgary.

“That’s creating chaos on the energy markets as people try to figure it out."

Producers here have already reduced output since the contagion swept across the globe, grinding economies to a halt.

Calgary-based Husky Energy Inc. has cut production by more than 80,000 b/d, while Crescent Point Energy Corp. has reduced production by 70 per cent because of weak oil prices. Both companies also further slashed their capital spending budgets on Monday.

Ms. Forrest said it’s likely Canadian producers have already dialed back production by close to 700,000 b/d so far. Many analysts project that number could hit more than one million b/d if prices remain depressed.

Ms. Forrest said the production cuts so far are not enough to fix the problem.

“If there’s no place to put the crude, refiners kind of have to say: ‘Okay, well, I’m not taking it. And if I am going to take it, you have to pay me to take it, because there’s a cost and I don’t know what I’m going to do with it.’”

And while June futures contracts settled at a much higher level of US$20.43 a barrel, he said the implications of a prolonged negative pricing situation “could not be more serious” for the industry.

“This strikes right at the heart of the Canadian economy," he said.

With hundreds of thousands of jobs on the line – along with implications for the manufacturing and banking sectors, pension funds and government revenues to fund health care and public services – Mr. Kenney said Canada’s energy industry cannot afford to be permanently hobbled.

Federal Natural Resources Minister Seamus O’Regan said on Monday he was “deeply concerned” with the situation in global oil markets, and was closely monitoring developments. 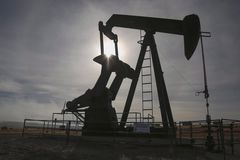