OMERS, which co-led with JP Morgan Chase a $72-million financing by TouchBistro in 2018, is doubling down by investing $100-million in a deal that is also backed by Barclays, BMO Capital and RBC Ventures. It is believed the financing values the company at about $500-million before the cash infusion.

It is one of the largest financings of a tech startup in Canada this year and positions TouchBistro, which is expected to generate close to $50-million in revenue this year, for an initial public offering by early 2021, said co-founder and chief executive officer Alex Barrotti. “I’d like to be the next Shopify,” he said, referring to the Ottawa retail-software giant that is now worth more than eBay or Twitter.

The funding comes as TouchBistro expands both the breadth of its software offerings to its 16,000-plus restaurant customers, primarily in the United States, Canada, Mexico and Britain, and also its global presence. The nine-year-old company started out providing software for waiters to take and transmit tableside orders on Apple iPads and effortlessly split bills with an on-screen swipe.

Several customers say TouchBistro’s technology, which replaced dated, fixed terminals offered by Micros and NCR, is easy to use, saves time and enables them to turn over tables more frequently. “As a business owner, I’m happy,” said Jim Nichols, owner of two Chicago-area Crosstown Pub restaurants, who credits TouchBistro for helping him generate an average US$10,000-plus in revenue weekly per location.

TouchBistro, which competes against U.S. software upstarts Square and Toast, is now positioning itself to become “the operating system of the restaurant,” board member Peter Misek said. The company has struck payments processing revenue-sharing deals with J.P. Morgan in the United States, Barclays in Britain and Mexico’s EVO Payments, which now account for 21 per cent of recurring revenue. It offers kitchen-management display systems for cooks and reporting and analytics software for managers.

TouchBistro is eyeing expansion into scheduling, payroll and inventory management, online ordering and reservations, which it predicts will increase its average 60-per-cent annual revenue growth rate over the past three years to 90 in the next three. “We’ll come up with a host of other products that will complement [the platform] and help restaurants stay in business and make more money,” Mr. Barrotti said.

The deal is a landmark investment by OMERS, which was the first large Canadian institution to provide venture capital to Canadian tech startups after the credit crisis abated. OMERS has since backed some of the biggest names in the Canadian tech scene, including Shopify, Hootsuite and Wattpad.

As several Canadian tech firms have grown in size, so have their financing needs, so OMERS decided a year ago to start its own “growth equity” division capable of writing much larger cheques to the scaling companies.

“This is usually when we would step forward and start leveraging our U.S. networks to bring in high-quality growth [American] investors," said OMERS Ventures managing partner Damien Steel. “In this case we have the benefit of having a fund very close to us here [within OMERS] so we took the opportunity to introduce the company to them.”

Mark Shulgan, head of growth equity with OMERS, said, “The fact we’ve made it our first [growth] investment … speaks to the conviction we have in the company and the management team and what we see as being an attractive and large addressable market.”

Mr. Barrotti, who was born in Uruguay to Italian parents but grew up in Toronto, was a teenage programmer who spent a summer networking his school board’s computers and wrote an attendance program for his high school. He eschewed university to become an entrepreneur, hitting upon success during the dot-com boom with a company called Inex Corp. that helped merchants open e-commerce sites. He sold it for $45-million in 1999 and moved to Turks and Caicos, where he dabbled in various ventures.

The idea for TouchBistro came in 2010 after a sushi restaurant owner asked Mr. Barrotti if he could figure a way for servers to transmit orders from patio to kitchen electronically. When Apple released the iPad that year, Mr. Barrotti realized it would be the ideal tool for such a task; he returned to Toronto to develop the product and pitch local restaurants.

TouchBistro grew to serve more than 2,000 restaurants by 2015 when U.S. credit-card companies were mandated to roll out chip-and-pin technology. That flooded TouchBistro with orders as restaurateurs had to upgrade their point-of-sale systems. The company now adds 500 to 700 customers and $1-million in annualized revenue monthly. 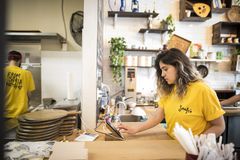 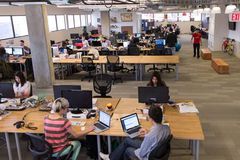