After unexpectedly weighing in on a national review of mutual fund fees, Ontario’s Finance Minister finally offered a glimpse into the government’s thinking on Tuesday, citing fears about the unintended consequences of any commission changes.

On Sept. 13, the same day the Canadian Securities Administrators (CSA) formally proposed fee changes, including eliminating early-withdrawal penalties on mutual funds known as deferred sales charges (DSCs), Vic Fedeli released a statement that took issue with the recommendations – and seemed to target the decision on DSCs specifically. Despite throwing what had been a nationwide, six-year fee review into disarray, the government said little else that day, and remained silent for weeks after.

During Question Period on Tuesday, NDP finance critic Sandy Shaw pressed the government to explain itself, noting that Canadian regulators “have long described these fees as bad for investors" – a finding that came from two independent studies conducted during the six-year review. Responding, Mr. Fedeli said Ms. Shaw may “want to study what happened in the United Kingdom with embedded commissions and how this did not work.”

Mr. Fedeli declined to comment when contacted by The Globe and Mail, but he appears to be referring to Britain’s decision in 2012 to ban embedded commissions of all kinds for money managers, which meant advisers could charge only a clearly articulated fee, often between 1 per cent and 1.5 per cent of an investor’s assets under management.

Four years later, Britain’s lead securities regulator studied the impact and found the move to fee-based advice “has improved transparency and ended conflicts of interest caused by a mainly commission-driven model." However, it came with a trade-off: The country’s adviser ranks dwindled after the new rules were implemented, dropping from 40,000 in 2011 to 31,000 in 2014. Because of this shift, it had become harder for clients with modest wealth to get advice.

By referencing this unintended consequence, Mr. Fedeli suggested Ontario’s government is worried about job losses and the implications for average retail investors. But the NDP finance critic is skeptical of the argument. Mr. Fedeli “keeps commenting on Ontario being open for business, but when it comes to detail, just throwing out a reference to a U.K. study doesn’t help average investors to have the confidence in the market," Ms. Shaw said in an interview.

There are also significant differences between Britain’s changes and what Canada’s securities regulators have proposed. Far from banning commissions of all stripes, the watchdogs have proposed scrapping only DSCs, which are rarely found elsewhere. Some 18 per cent of all mutual fund assets in Canada carried the DSC option at the end of 2016, yet they are used on only 1 per cent of mutual fund assets in the United States and Europe, according to the CSA.

The investment industry is also rapidly changing. When Britain banned commissions in 2012, there were not nearly as many avenues for average investors to find advice – such as robo-advisers and money managers offering low-cost, basic funds that can fulfill the needs of most average investors. Canada’s banks have also beefed up the wealth-management services and now employ roughly 10,000 mutual fund advisers in this channel.

Regulators have said little since Ontario interfered in their review, but at an investment conference last week, Hugo Lacroix, senior director of the investment funds branch at the Autorité des marchés financiers, Quebec’s securities regulator, said they will do more consultations, including a round-table with young advisers affected by the DSC proposal.

The fee proposals by CSA, an umbrella group composed of the country’s provincial securities regulators, came after years of study and consultations with the investment industry and dovetailed with a new rule to curtail some commissions collected by discount brokerages or do-it-yourself investing services. 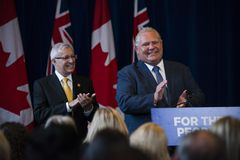 Follow Tim Kiladze and Clare O’Hara on Twitter @timkiladze @oharaclare
Report an error Editorial code of conduct
Due to technical reasons, we have temporarily removed commenting from our articles. We hope to have this fixed soon. Thank you for your patience. If you are looking to give feedback on our new site, please send it along to feedback@globeandmail.com. If you want to write a letter to the editor, please forward to letters@globeandmail.com.
Comments