Ontario restaurants and bars are facing soaring insurance costs and possible closings as Canadian insurers begin to hike premiums and cancel policies during a time when most establishments are struggling to remain open during the global COVID-19 pandemic.

“We have seen the evidence of establishments being asked to pay exorbitant fees for their insurance,” Mr. Tory said. “[Insurers] really cannot have any justifiable business or rationale behind [these increases]."

Insurance brokers in Ontario have been told that some policies are being cancelled because of concerns around the legal risks if a patron at an establishment contracts COVID-19. As a result, insurance premiums have been raised as much as 300 per cent for some bars and restaurants that have tried to renew policies in recent months, while other establishments have been refused insurance entirely – making it almost impossible for them to operate.

Commercial business policies are required for most establishments to be open, covering policyholders for fire, theft, liability and, in some cases, business interruption.

Toronto City Council passed a motion on Wednesday to support the Ontario government in any actions it takes with insurers to prevent “astronomical” increases in premiums. During Mr. Tory’s news conference, he asked insurance companies to put a “pause” on any cancellations or rate hikes until “the pandemic is behind us.”

The Dakota Tavern, a popular live music venue in the west end of Toronto, is at risk of shutting its doors on Oct. 18, when its insurance policy expires. The 20-year-old establishment is in the basement of a leased building on Ossington Ave., and requires commercial business insurance as part of its rental agreement.

Dakota owner Stephen Reid was anticipating a small increase to the venue’s monthly $1,700 premium because of possibly being evaluated as “higher risk” with pandemic-related liabilities, such as a virus outbreak. But after applying for his policy renewal last week, he was shocked to find out his insurance company was dropping his coverage altogether. Then, when his insurance broker called around for other quotes, more than a dozen companies declined to provide a policy without saying why the venue was too risky to insure.

“They have been happy to take our money the entire time we were closed with no rebates or adjustments,” Mr. Reid said. “Now that policies are up for renewal, they refuse to provide insurance even to venues that have been in business for years with no claims.”

Mr. Reid, who also owns Castro’s Lounge – a smaller bar in Toronto – is warning other venues that they, too, could lose coverage at renewal time if the provincial government doesn’t step in.

“It doesn’t matter if you are a nightclub that can accommodate thousands or a mom-and-pop diner that seats a dozen. The insurance industry is not, with very few exceptions, renewing policies for bars and restaurants,” he said.

Allianz Global Corporate and Specialty Insurance told The Globe and Mail that, after a recent review, it discontinued underwriting policies for new business on certain products – including insurance for restaurant and hospitality establishments – as of July 31, 2020. A spokesperson for AGCS declined to comment on the reasons for the discontinuation.

Danish Yusuf, chief executive of Zensurance, an insurance broker for small businesses across Canada, says increases in premiums for liability policies are becoming the norm for restaurants and bars. He’s also seen several insurance companies stop writing policies altogether for the hospitality sector, even before COVID-19.

Specialty insurers such as Totten Group Insurance and Lloyd’s of London used to be “go-to” companies for restaurants and bars, Mr. Yusuf says, but even those companies are now starting to decline renewals or, in some “hit or miss” cases, they will increase premiums.

John Sinopoli, co-owner and executive chef of the Ascari Hospitality Group – which runs three restaurants and a bar in Toronto – helped create a coalition of about 1,300 restaurants through a website, Savehospitality.ca. Together, the coalition has a louder voice to talk to provincial governments, he says, which need to act immediately to prevent insurers from raising premiums to unsustainable levels before the industry collapses completely.

After receiving the latest renewal quote for Ascari’s Hi-Lo Bar – an annual premium of $20,000, up from $6,000 last year – Mr. Sinopoli was given no reason for the increase, and was told by his broker that insurance companies are “moving away" from the hospitality sector.

“We had zero claims in seven years and never missed a monthly payment,” Mr. Sinopoli said in an interview. “If we are required by our leases and by law to have insurance policies in order to be open, then insurance companies have an obligation to provide us with that service at reasonable market rates. This is a clear case of COVID-gouging.”

Steve Kee, spokesperson for the Insurance Bureau of Canada – a national industry group with 74 insurance company members – said the association is aware of the cancellation of coverage for certain establishments in the hospitality sector, but urged commercial clients to “shop around,” as coverage is available.

Vito Tomasicchio, who owns seven establishments throughout Toronto, says he was backed into a corner by his insurance company when it asked for seven months of upfront payments for his largest music venue. Despite the building not being open throughout the summer, and not generating any revenue, he was required to pay the lump sum or risk a lapse in coverage.

On three of his restaurants, Mr. Tomasicchio says he was able to renew policies, but at higher premiums for less coverage, and with higher deductibles.

“You buy these policies so that you can have peace of mind, but then you can’t even use them because you fear of being dropped or the deductibles are too high,” he said in an interview. “This is going to cripple the hospitality sector completely. We have no idea if we will have insurance when things do come back to normal."

Ontario to close all strip clubs, limit hours at bars and restaurants as coronavirus spreads
September 25, 2020 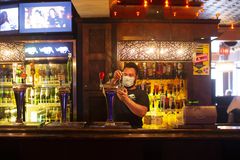