Mark Barrenechea is always shopping for the next deal. He’s willing to show how much is in his wallet, too.

In a wide-ranging interview at the company’s annual Enterprise World conference in Toronto, the Open Text Corp. boss said the company has no plans to waver from the acquisition strategy that he believes can deliver strong returns to investors in the long term.

While Bay Street has raised questions about Open Text’s slow organic growth, volatility in quarterly results and sluggish share-price growth compared with other Canadian software companies, analysts were mostly favourable about the message the company delivered during the conference’s investor day, where it announced a new “hybrid-cloud” version of its enterprise information-management platform.

The chief executive officer of the Waterloo, Ont., software company, which brought in US$2.3-billion in revenue in fiscal 2017, does not care to name the sector he is looking at for the next big buy. But he will say it would work within the company’s existing verticals, or market segments, among them security and internet-of-things offerings, and additions to its core content services for large companies.

But with available capital including about US$600-million in cash and equivalents as reported at the end of Open Text’s last quarter, as well as a US$450-million line of credit and a preference not to operate with a debt-to-adjusted EBITDA ratio greater than three, the CEO knows his sweet spot.

“I think we could comfortably put US$1.5-billion of cash to work quickly if the right opportunity or opportunities were in front of us,” he told The Globe and Mail.

Open Text has made dozens of deals in the past two decades, last year buying Guidance Software Inc., which conducts forensic security analysis, and Covisint, which offers digital identity management, for about US$200-million and US$100-million apiece, bolstering its security offerings.

But the next opportunity could be more in line with what Open Text paid for its biggest acquisition to date: the US$1.62-billion purchase of Dell Technologies Inc.’s enterprise content division in 2016.

One of the biggest technology companies on the Toronto Stock Exchange by market capitalization, Open Text stores and manages data for thousands of customers worldwide, including 85 of the largest 100 companies in the world, with products and services such as analytics and process automation. It hopes OT2, a new software-as-a-service version of its enterprise-information platform, will lure customers that have hesitated to use cloud-based services.

The company will reveal its fourth-quarter and full-year fiscal results for 2018 on Aug. 2. In its last fiscal year, its revenue rose 26 per cent to US$2.3-billion, while its adjusted earnings before interest, taxes, depreciation and amortization (EBITDA) were up 18 per cent, at US$793-million.

While Open Text’s NASDAQ-listed shares are up about 9 per cent year-to-date, Canadian software firms with similar acquisition strategies, The Descartes Systems Group Inc. and Constellation Software Inc., have risen about 26 per cent and 45 per cent, respectively. Mr. Barrenechea chalked up the discrepancy to Open Text’s aggressive capital deployment, primarily via acquisitions − US$3.5-billion in the past few years.

“We need to show consistent performance in the return of that capital,” he said. But, he continued, paraphrasing the influential investor Benjamin Graham, “In the short term, markets are typically a little more [populist]; in the long term, markets are weighing machines,” taking the full impact of each company’s decisions into account. “We’ve made very good long-term decisions.”

Thanos Moschopoulos, an analyst with Bank of Montreal’s capital markets unit, who has an “outperform” rating on the stock, said in an interview that Open Text’s valuation gap with its competitors might have more to do with its “lumpy,” irregular pace of acquisitions. “Some people like consistency,” he said. Still, he said, “I do believe the stock is undervalued.” His target price is US$39; the U.S. listed shares closed at US$37.76.

Another issue that can concern investors is Open Text’s quarter-to-quarter volatility. National Bank Financial technology analyst Richard Tse said in a research note last month that this can stem from the uneven integration of the company’s acquisitions and the continuation of its legacy licensing revenues. He said the latter is falling as the company gradually acquires more recurring-revenue businesses.

“If you look at the name over many years, the proportion of licence revenue that causes volatility has come down quite a bit,” Mr. Tse said in an interview. (In fiscal 2017, Open Text brought in $1.7-billion in annual recurring revenue and $369-million in licensing revenue.)

And while some analysts have criticized the company’s lower organic growth, Mr. Barrenechea said he’d like to keep that measure in the low single digits, and said that the company’s core acquisition strategy is unlikely to waver. 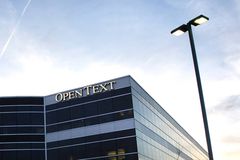 Open Text bulks up with seventh purchase since April 2016 Subscriber content
July 26, 2017
Open Text targets IBM in aggressive artificial intelligence push Subscriber content
July 11, 2017
Follow Josh O’Kane on Twitter @joshokane
Report an error Editorial code of conduct
Due to technical reasons, we have temporarily removed commenting from our articles. We hope to have this fixed soon. Thank you for your patience. If you are looking to give feedback on our new site, please send it along to feedback@globeandmail.com. If you want to write a letter to the editor, please forward to letters@globeandmail.com.
Comments