The ranks of opponents to Sidewalk Labs’ proposed “smart city” on the Toronto waterfront aren’t giving up their fight now that its plans are scaled back – and they’ve been taking advice from some well-known colleagues overseas.

Waterfront Toronto, Sidewalk’s government partner, agreed last month to let the urban-planning company keep developing plans for the neighbourhood on a smaller scale than it wanted. But its most vocal group of detractors, who call themselves #BlockSidewalk, intend to keep pushing back on the company’s plan to build a sensor-laced, technology-centric community on the shore of Lake Ontario.

They believe the proposal has given rise to enough concerns about privacy, data collection and public control over the past two years that the Google affiliate is the wrong partner for the project. Even if Sidewalk stays, said #BlockSidewalk’s JJ Fueser, “If we sat on our hands and said we were done, the project might grow back again to its intended scope."

In the past few months, they’ve found some formidable allies – the activists who helped stop Sidewalk’s sister company Google from opening a startup campus in Berlin a year ago. “They really raised expectations and pushed us to understand what’s at stake," said Ms. Fueser, who’s led communications between the two cities.

The Berliners have long been following Sidewalk’s plan and see clear parallels between the two projects: An Alphabet Inc. company that wants to profit from innovation while, they say, making cities less livable for lower-income residents.

The German activists claimed victory last October when Google backed away from the Berlin project after two years of opposition. That night, a band of activists who oppose Big Tech’s dominance raced to the former electrical substation in the Kreuzberg neighbourhood where it would have been housed, popped bottles of Rotkappchen sparkling wine and began to spray paint a banner declaring that their war against the internet giant wasn’t over.

“Solidarity from Berlin to SF, to San Jose, to Rennes,” it read, concluding: “To Toronto.”

In the two years since Sidewalk first came to Toronto, opposition to the ways Big Tech can reshape cities has swelled. In New York, for example, Amazon.com Inc. pulled the plug on a second major headquarters in Queens after public hostility over potential tax breaks and gentrification. The campaign against Google in Berlin has become regarded as one of the major successful pushbacks to this global phenomenon.

The Berlin campus was announced in November, 2016, after Google startup-campus success in cities such as London and Tel Aviv. In selecting Kreuzberg, it hoped to set up in Berlin’s crucible of cool – a neighbourhood filled with artists, punks and recent immigrants.

One prominent faction of Berlin activists focused on Google’s data-gathering and centralization of power online, with the hope of putting more power in the hands of users. Speaking to The Globe and Mail over pizza across the canal from the substation, one such activist described their efforts as a multidisciplinary attack from many angles. (The activist was granted confidentiality because of possible professional retribution.)

Local anti-gentrification activists mobilized shortly after saving a beloved nearby French bakery. “Everybody comes together here," said Stefan Klein, an erstwhile music lawyer who now defends tenants’ rights in Kreuzberg. The community is already filling with startups and short-term rentals, he said, shooting rent up and displacing low-income residents. He believes Google could have accelerated this process, while also getting the pick of the startup litter for acquisitions and hiring.

A diverse range of other groups, from anarchists to concerned neighbours, soon joined the cause. Some opponents held “noise parties” outside the substation, banging drums and bridge rails; some held protests that drew hundreds; some briefly held a sit-in on the premises. The groups declined to engage with the company at all, out of fear that their conversation might be used to convey an endorsement.

Mr. Klein’s group, GloReiche, gained local support with brochures and community meetings. A loose band of digital-focused activists, meanwhile, brought the campaign online and into English – while slapping thousands of stickers across the city telling Google to scram.

Google declined to comment for this story, instead forwarding its October, 2018, news release that announced it had given the space in Berlin to two social-focused organizations after “discussions with nonprofits" prompted it to rethink the space. Sidewalk also declined to comment.

Toronto activists banded together as #BlockSidewalk this past February and soon began communicating with Berlin’s digital-decentralization activists. From them, Ms. Fueser said, “We got the sense of, ‘Guys, it’s up to you to put No on the table.'"

The Berliners’ ground game became much easier to emulate, Ms. Fueser said, once Sidewalk published its now-scuttled draft plan in June that sought measures well beyond Waterfront Toronto’s purview, including to vastly expand its geographic influence.

Similar to the Berliners, they’ve set up a central website to explain their campaign, and are spending time with people and groups who would be affected by the project, from nearby residents to waterfront sailing clubs to community groups. Many are now concerned that the project will only worsen the city’s real estate crisis, even with Sidewalk’s promise to build the legally required minimum of affordable housing.

Some Sidewalk opponents have moved toward more confrontational approaches like their colleagues in Berlin. A group including members of the Association of Community Organizations for Reform Now, which supports low- and modest-income families, recently walked into Waterfront Toronto’s offices and successfully demanded a meeting with top executives to discuss affordable housing and mass surveillance.

There are differences between Berlin and Toronto. Sidewalk’s ambitions are bigger than a startup campus and are planned for an underdeveloped property without the immediate presence of a dense, progressive residential neighbourhood. But the Berlin organizers set off what could become a global pushback against digital giants’ physical encroachment – and they hope their colleagues in Toronto can match their success. “It’s a catastrophe that’s happened,” Mr. Klein said. 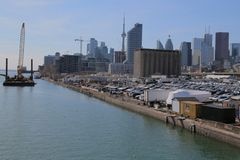