The federal government is revisiting its auto fuel-efficiency standards for the years 2022-25 as it faces a tough decision on whether to align with the Trump administration’s proposal for less-stringent rules.

Environment and Climate Change Minister Catherine McKenna on Monday released a discussion paper that kicks off an evaluation of the existing 2022-25 vehicle regulations, which were put in place in partnership with the previous U.S. administration in 2014. The commitment to a midterm review was included in the 2014 regulations, when Ottawa did not anticipate a U.S. administration reversing direction.

In a review this spring, the Environmental Protection Agency concluded those standards are not appropriate because they would drive up costs to the industry and motorists. Earlier this month, the Trump administration proposed freezing fuel-efficiency regulations at 2020 levels, and declared California no longer has the right to set its own standards, a decision that state has vowed to fight in court.

Canada should adhere to a single U.S. standard if there is one and make it continental, said Mark Nantais, president of the Canadian Vehicle Manufacturers Association, which represents the Canadian units of the Detroit Three – Fiat Chrysler Automobiles NV, Ford Motor Co. and General Motors Co.

Standards that are harmonized between Canada and the United States are “deeply entrenched in our integrated market for vehicle sales and production,” Mr. Nantais said on Monday. Canada’s auto sector has consistently urged the federal government to align its regulation with those in the United States, as the American industry has pushed for one set of standards.

Canadian car makers are already coping with the uncertainty of the North American free-trade agreement negotiations and likelihood of greater North American content required to ship vehicles duty-free across the border. Officials in the sector have warned that Canada needs to be focused on competitiveness issues as it diverges on environmental policy from the Trump administration.

The Canadian market of about two million vehicles sold annually is too small to develop unique standards, Mr. Nantais said, and going it alone would raise costs and possibly limit choice.

The Liberal government in Ottawa is now conducting a review to determine whether the Canadian standards need to be change, and if so, whether it will match ones established by Washington, join California should it succeed in defending its jurisdiction, or go it alone.

Canada has typically harmonized its vehicle-efficiency regulations with the United States because of the fully integrated nature of the North American vehicle market.

The Liberal government is counting on the tougher auto efficiency rules, which would cut average greenhouse gas (GHG) emissions from light-duty vehicles – including passenger cars and light trucks – by half between 2015 and 2025. The existing rules would also result in a 50-per-cent improvement in the average efficiency of light-duty vehicles sold in North America, Environment Canada said in its paper.

“Cleaner cars are good news for the planet, and they save Canadians money at the pump,” Ms. McKenna said in a release. “We’re committed to cutting pollution across the transportation sector while maintaining a strong and competitive auto industry.”

In the discussion paper, Environment Canada said it would review the regulations in the context of Canada’s commitment under the Paris Climate Accord to reduce overall GHG emissions by 30 per cent from 2005 levels by 2030. It will also look at competitiveness issues and cost impacts in its review of fuel-efficiency standards, including the effect on vehicle purchase prices as well as savings from lower fuel consumption.

The transportation sector accounts for a quarter of the country’s annual emissions of greenhouse gases and the federal government is pursuing several policy measures aimed at reducing them.

Environmentalists worry about the growing pressure on the Liberal government to ease up on its climate-change commitments as President Donald Trump rolls back a slew of policies adopted by his predecessor, Barack Obama.

“We need to do it in order to be on the right trajectory for transport industry emissions and our 2030 targets,” said Dan Woynillowicz, policy director at Clean Energy Canada, an advocacy group. At the same time, consumers will benefit from lower fuel costs while the industry will have an incentive to continue innovating, he said.

With files from Greg Keenan in Toronto 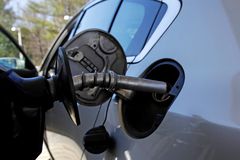