The money will be used to purchase goods both in Canada and abroad. Ottawa wants to buy thousands of ventilators and millions of masks and Prime Minister Justin Trudeau said he expects shipments of personal protective equipment (PPE) to start arriving within days.

“Demand for these goods is going up, so we’re making sure Canada is ready to keep up,” Mr. Trudeau told reporters on Tuesday, adding this spending will include bulk purchasing on behalf of provinces and territories as well.

Aid package for energy, airlines and tourism sectors still a work in progress

“This includes things like more masks and face shields, gowns, ventilators, test kits and swabs and hand sanitizer,” he said.

Infectious disease experts say a shortage of masks, gloves, gowns and other personal protective equipment for health-care workers is one of the most urgent problems facing Canada as it contends with a growing COVID-19 crisis. Front-line health workers say they have had to ration their PPE amid growing fears of running out. Health experts say there’s an urgent need to secure a sufficient long-term supply of PPE in order to protect health-care workers from infection and allow them to remain on the job.

“The situation is critical,” said Lucas Castellani, an infectious diseases physician in Sault Ste. Marie, Ont. “When a health-care worker comes into the hospital, they get one or two masks from their department. That is their mask for the whole day.”

Dr. Castellani said various governments have promised to increase the supply of PPE, but until it’s in the hands of health-care workers, it won’t make a difference.

Major shortages in test kits as well as laboratory backlogs have plagued Canada since the start of the COVID-19 outbreak. A global surge in demand for testing supplies, in particular specially made nasal swabs and the chemical reagents used to complete the diagnostic tests, have left countries around the world scrambling to secure more. Shortages prompted officials in provinces including British Columbia, Alberta and Ontario to test only a narrow group of people, such as those with severe illness, health-care workers or long-term care residents.

Since the Quebec government began implementing wide-spread measures to fight the coronavirus outbreak in mid-March, Premier François Legault has insisted the province is prepared and well-equipped with personal protective equipment. This position started to erode Monday when the Premier suggested health-care workers might have to wash and reuse N95 masks. By Tuesday, he was acknowledging the province is facing more than a shortage of masks.

“Our big priority is obtaining personal protective equipment. … Every day we do a detailed inventory,” Mr. Legault said.

“I want to be very clear, I want to tell the truth. With some equipment, we’ve got three to seven days’ worth. We have orders coming through in coming days and we are hopeful we will get through it.”

Mr. Trudeau said Tuesday the federal government had finalized deals with two Canadian startups that will provide enough supplies for one million coronavirus tests and the production of 500 ventilator units in the coming months. The government said it has ordered an additional 1,000 ventilators from other manufacturers.

“I know that this pandemic has been incredibly challenging for people right across the country, but we’re also seeing the best of what it means to be Canadians. From coast to coast to coast, businesses are retooling to produce face shields, ventilators, hand sanitizer and other supplies our health-care professionals need.”

Spartan Bioscience Inc. of Ottawa, which makes portable DNA testing machines that can produce coronavirus tests results in 30 minutes, has inked a $78-million order with Ottawa to provide 100 of the testing machines and one million test kits within the next 12 months. It has also signed a $68-million deal to supply a similar amount of machines and test kits to Ontario. It’s also reached a smaller deal with Alberta and is in advanced talks to supply Quebec.

The company said it will take eight to 12 weeks to build up full capacity to produce the tests. It said it expects to start shipping already-booked orders in April.

The new rapid testing technology being produced by Spartan Bioscience could help fill testing gaps, particularly in more remote and rural areas that don’t have easy access to hospital-based laboratories. Like other COVID-19 diagnostics, Spartan’s is a polymerase chain reaction (PCR) test. But other tests are processed through large machines, whereas Spartan’s relies on a small handheld DNA analyzer, which makes it an attractive option for small hospitals, Indigenous communities and other remote centres, said Paul Lem, Spartan Bioscience’s chief executive officer. Because it can provide results in about half an hour, he said, those centres won’t have to ship samples and wait days for results, as they do currently.

Dr. Lem said another advantage is the company produces its own throat swabs for COVID-19 testing, meaning providers don’t have to worry about sourcing for the nasal swabs, which are increasingly scarce around the world. He said the company is working with Health Canada on a daily basis to submit efficacy data and that it expects federal approval soon, at which point it will start shipping tests.

Dr. Lem said his company is one of only five in the world that produces portable DNA analyzers. Many countries have stopped exporting any of their tests to other countries, so Spartan is able to provide a made-in-Canada solution, he said.

“We definitely see us as a complement to public-health labs and the hospital labs,” Dr. Lem said.

Jim Woodgett, director of research at the Lunenfeld-Tanenbaum Research Institute at Mount Sinai Hospital in Toronto, said this new type of test will become increasingly useful as COVID-19 moves from large urban hotspots to other parts of Canada.

“We’re seeing it spread much more through the communities,” Dr. Woodgett said. “That’s why it’s really important to ensure that everybody has access to this test.”

Meanwhile, Toronto-based Thornhill Medical Inc., which makes portable ventilators for military customers, has received an order for 500 of its units from Ottawa, on the heels of an order of 40 from the Ontario government signed last week. To meet the surge in demand, it has struck a deal with Ontario auto-parts manufacturer Linamar Corp. of Guelph, Ont., which will make up to 400 of the units a month once it has retooled its line in the coming weeks.

Linamar CEO Linda Hasenfratz said she said she believes Linamar can have production up and running to make Thornhill’s ventilators by late April or early May. “A lot of it will depend on the supply base.”

Mr. Trudeau said Ottawa had also finalized a contract first announced 11 days ago with AMD Medicom Inc., based in Pointe-Claire, Que., ordering 157 million surgical masks and 60 million N95 protective masks. He said the government is also close to concluding a deal with Medicom to establish its first permanent manufacturing facility in Canada. Governments in Taiwan, China and France have requisitioned output of personal protective gear made by Medicom in those countries, limiting its ability to export to countries including Canada. It also has a facility in the southern U.S. that is supplying masks to Canada in the short term.

The government has also signed letters of intent – a preliminary indication of commitment – with five Canadian companies to retool their factories to produce or expand production of medical supplies. Those include: DNA technology company Precision Biomonitoring Inc. of Guelph, Ont., which plans to make COVID-19 test kits once authority has been granted by Health Canada; chemical-solution maker Fluid Energy Group Ltd. of Calgary, which will produce hand sanitizer; Irving Oil Ltd. of Saint John, which will revamp a blending and packing facility to produce hand sanitizer; protective gear maker Calko Group of Montreal, which will ramp up production of masks, gowns and other medical protective equipment; and Stanfield’s Ltd. of Truro, N.S., a garment maker known for its underwear, which will make medical gowns and protective wear for health-care workers. 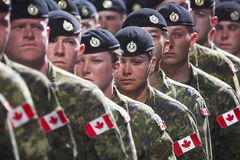 Follow Steven Chase, Sean Silcoff, Carly Weeks and Les Perreaux on Twitter @stevenchase @SeanSilcoff @carlyweeks @Perreaux
Report an error Editorial code of conduct
Due to technical reasons, we have temporarily removed commenting from our articles. We hope to have this fixed soon. Thank you for your patience. If you are looking to give feedback on our new site, please send it along to feedback@globeandmail.com. If you want to write a letter to the editor, please forward to letters@globeandmail.com.
Comments