Oxford Properties is testing its own co-working office in Calgary, where one-quarter of the office space downtown sits empty.

OxWorx allows the pension fund to cut out the middleman and operate its own co-working office on its property instead of leasing that property to a co-working company such as WeWork and allowing them to sublease the same space at a premium.

“We have a wide variety of pilots and experiments under way across our global portfolio, including the OxWorx pilot in Calgary,” Oxford spokeswoman Claire McIntyre said.

Oxford, which leases to WeWork in Toronto and Boston, has been looking for other ways to capitalize on the co-working trend, which has exploded in recent years owing in part to growing demand for office space among tech firms.

Co-working companies divide traditional office space into multiple workstations, which allows businesses, entrepreneurs and other tenants to rent as much or as little space as they need. Co-working offices typically include communal spaces such as a kitchen or living-room area, which allow tenants to collaborate if they choose to.

Co-working firms are among the largest corporate occupants in cities such as London, Vancouver and New York.

The OxWorx experiment takes place as Calgary struggles to fill office space after firms dependent on the energy sector slashed jobs and shrank their businesses during the oil downturn. Although oil prices have rebounded somewhat, businesses are not investing in office space the way they used to.

“Landlords simply have to be current and innovative. Co-working is only one example of that,” said Tracy Taylor Fullerton, commercial realtor Cushman & Wakefield’s Calgary managing director.

The office vacancy rate in Calgary’s business district hit 24.4 per cent in the first three months of the year, according to Cushman & Wakefield data. That is higher than during previous oil crashes.

The economic uncertainty has prompted businesses and other tenants to ask for shorter leases and cheaper prices.

Mr. Berger said Regus had to drop its prices about 10 per cent in Calgary. He would not provide detail on Regus’s occupancy rates except to say they were “healthy.”

“It has been a very difficult market,” he said, adding landlords and companies have approached IWG about taking their space.

OxWorx’s monthly prices range from $650 for a co-working seat and up to $6,300 for its largest office, according to the Oxford spokeswoman.

OxWorx advertises one monthly payment and simple lease documents. Its website says: “A basement or home office typically does not exude success. Although many new businesses started in the basement, most failed.”

OxWorx tenants are allowed to use amenities that used to be reserved for large, long-term tenants. That includes the use of a fitness centre and showers – more perks than WeWork, which provides coffee and beer in addition to turnkey office space and WiFi.

Oxford said OxWorx is about half-full and said it was “really encouraged by our customers’ positive response,” given it has only been open for three months. The co-working space is in an Oxford property called Bow Valley Square, which has four buildings – one of which has 20 suites available to lease.

Asked whether Oxford would introduce OxWorx in other cities, Ms. McIntyre said: “We don’t have any further locations to announce yet.”

Other property owners are trying to figure out how to capitalize on the co-working movement. For example, Ivanhoé Cambridge, the real-estate arm of the Caisse de dépôt et placement du Québec, recently said it is exploring a revenue-sharing model that would allow it to hire a co-working operator to run the space instead of leasing the space directly to the co-worker.

Staring down the next decade with Oxford Properties’ Michael Turner
Subscriber content
June 3, 2018 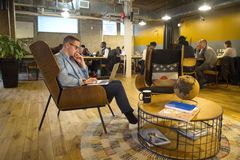