European private equity investor Pallinghurst Group is making a billion-dollar bet that Quebec will recover from its early blunders in battery materials and become a dependable pillar for supply in North America, as the global shift to electric transportation accelerates in the years ahead.

London-based Pallinghurst has invested more than US$500-million to date in two key battery-mining and material-processing projects in the province, with plans for more. The company scooped up mining company Nemaska Lithium Inc. out of bankruptcy protection in a partnership with the Quebec government’s investment arm and built up a 15-per-cent position in another supplier, Nouveau Monde Graphite.

“We’re all in” on Quebec, Pallinghurst’s co-managing partner, Arne Frandsen, told The Globe and Mail in a recent interview from his home in Geneva. “I would call it a US$1-billion bet. That’s what we have in our mind in committing to the province.”

The pledge by a sophisticated investor with a solid track record in the sector is a positive one for Premier François Legault’s Coalition Avenir Québec government, which is trying to make good on an ambitious vision to capitalize on Quebec’s carbon-free hydropower and create a lithium-ion battery industry.

That vision, to play host to a series of companies working on various links along the value chain from mineral extraction to manufacturing, tops Mr. Legault’s economic priorities. His government is working to secure private-sector partners to help fund a push that will cost upward of $7-billion.

The path to get there has been far from smooth. Although Quebec first mined lithium as far back as 1955, none of the six lithium-mining projects listed by the Quebec government on its website are in commercial operation. The future of one insolvent producer, North American Lithium Inc., is the subject of a court battle.

Nemaska went through its own creditor protection process. Even Quebec electric-bus maker Lion Electric, which went public in May amid much fanfare and continues to book new sales, hasn’t escaped the turmoil: Rival bus makers are crying foul about state subsidies that they say unduly benefit the manufacturer.

Nemaska controls Whabouchi mine in Quebec’s northern James Bay region, one of the world’s richest deposits of spodumene – a mineral source for lithium, the sought-after, silvery-white metal used in consumer electronics and electric cars. The company hatched plans to mine it and transform it in a highly hyped project that promised billions in revenue. It filed for bankruptcy protection in December, 2019, leaving thousands of retail investors and taxpayers with worthless shares.

“It is a financial disaster” that could have been avoided, Quebec’s former economy minister, Pierre Fitzgibbon, told a legislative committee last year. Nemaska should never have gone public, he has said. “I was sitting in the chair at my hairdresser’s a few months ago and he told me he was a shareholder in Nemaska on his broker’s advice. I had pain in my stomach for an hour.”

Mr. Frandsen agrees that Nemaska was sunk by its capital structure and that there’s nothing inherently flawed in its assets and operational strategy. The company failed to prepare for the worst conditions and didn’t have enough money nor the right type of money to get through it, he said. In sum: Too much debt, not enough patient equity, he said. It is now privately held by Pallinghurst and Quebec, which intend to buy out a separate creditor, Orion Mine Finance, over time.

“The chaps that are building the mine, the chaps that are going through the technology, they were bloody smart and they were clever and they did the right thing,” Mr. Frandsen said. “[But] what then happened was that you took that soufflé and you put it into an oven that wasn’t warm enough and guess what? It didn’t rise.”

Nemaska’s new owners are now finishing an optimization study for the company that will analyze the right size of operations and plot a new course to commercialization. The company last month announced that it signed an option agreement to buy a 500,000-square-metre plot of land in Bécancour to build and operate a chemical conversion facility for the production of battery-grade lithium hydroxide. The location was chosen in part because of its year-round access to a deep-water port.

A stone’s throw away from that site is where Nouveau Monde is building its first graphite purification and coating facility. The company, which recently added a listing on the New York Stock Exchange to its Toronto Venture Exchange presence and raised about US$60-million, specializes in battery-anode material.

It is aiming big: To supply the major automotive and battery manufacturers such as Tesla and Volkswagen starting in 2023. Nouveau Monde will be the biggest graphite anode producer in the world, outside China, according to Mr. Frandsen.

The affable Dane cut his teeth as an investment banker before turning to mining, and chairs the Nouveau Monde board. Colleague Andrew Willis is also a director at the company. In all, Pallinghurst has dispatched four people to Montreal to help work on its investments. They moved over the past year and now live in the city full time.

Pallinghurst, which invests on behalf of clients including Netherlands’ state pension fund, landed on Quebec for its first battery-materials investment in 2018 after an “unemotional” analysis of global geographies, Mr. Frandsen said. Countries without an investment-grade credit rating were ruled out, as were those without strong rule of law.

Countries had to have mining history, with a specialized labour force in place. Canada emerged as a clear winner and it was Quebec, in particular, that offered significant support from government for sustainable development initiatives, Mr. Frandsen said.

“You have the political willingness to think big,” he said. “And then you have the systems that allow you to invest in a sensible and very transparent manner. To me, that’s what it’s really about.”

Such big thinking has arguably hurt Quebec over the years as much as it has helped it. Montreal’s Olympic Stadium, Gaspésia paper mill and Bombardier’s C Series airliner are all examples of ambitious, government-sponsored industrial undertakings that soaked up hundreds of millions of dollars in public funding with debatable results.

But Quebec has something else that gives it an edge against other jurisdictions trying to set up their own electrification hubs, Mr. Frandsen says: Cheap clean power. The fact that mining sites and processing plants will be powered by hydroelectricity is “massive,” he said. And it’s one reason he’s hesitant to commit a significant percentage of Nouveau Monde’s output through early discounted sales contracts.

“I believe that going forward, it’s a premium product that doesn’t have a carbon footprint,” he said. “[So if] what you’re producing is high quality and you are at the doorstep of the giga factories in North America, I don’t have the urge to sell much before I’m ready.” 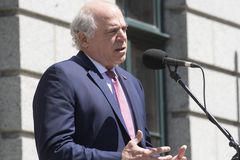 Pallinghurst matches offer from rival for Consolidated
October 13, 2007
Follow Nicolas Van Praet on Twitter @NickVanPraet
Report an error Editorial code of conduct
Due to technical reasons, we have temporarily removed commenting from our articles. We hope to have this fixed soon. Thank you for your patience. If you are looking to give feedback on our new site, please send it along to feedback@globeandmail.com. If you want to write a letter to the editor, please forward to letters@globeandmail.com.
Comments