Nicolas Van Praet
Published May 13, 2021 Updated May 14, 2021
Comments
Text Size
Please log in to listen to this story. Also available in French and Mandarin. Log In Create Free Account

Quebec media magnate Pierre Karl Péladeau is abandoning his effort to buy Transat AT Inc. , increasing the likelihood the Canadian travel company will go it alone as it tries to rebuild its decimated business in the months ahead.

Mr. Péladeau, the chief executive and controlling shareholder of Quebecor Inc., is walking away after a disagreement with Transat’s main shareholder, Letko, Brosseau & Associates Inc., over the travel company’s valuation. Letko believes Transat is worth more than $5 a share – and Mr. Péladeau does not, he told Quebecor’s Journal de Montréal newspaper Thursday.

The media executive also castigated Transat’s leadership for failing to bring his two previous offers for the company to shareholders. He has previously said he was prepared to offer $5 a share for Transat, an investment the multimillionaire intended to make on a personal basis, not through Quebecor.

“I’m no longer interested,” Mr. Péladeau is quoted as saying. “If I make a new offer, I know it’s not going to get through. What’s the point of making one when you know the biggest shareholder is going to refuse?”

Transat said in a statement Friday that it had not received any formal communication from Mr. Péladeau about his intentions. The company said a special committee of directors has reviewed his non-binding $5-a-share offer with the assistance of outside financial and legal advisers and that talks had been continuing with the suitor into this week.

“The fact is nobody wanted Pierre Karl Péladeau touching Transat,” said Mehran Ebrahimi, a professor at the Université du Québec à Montréal who leads a research group in aerospace company management, citing opposition by Transat’s pilot union, among others. The fear was always that someone without experience in the airline sector, such as Mr. Péladeau, would take over and struggle to get the company back on course, he said.

A representative from Letko, which owns about 13 per cent of Transat stock, did not respond to a request for comment.

Letko vice-president Peter Letko told The Globe and Mail last month that he would not sell his shares to Mr. Péladeau for $5 cash, as that would amount to “giving the company away.” A previous bid for Transat by Air Canada, which offered shareholders either $5 in cash or 0.2862 of an Air Canada share for each Transat share, was more attractive, he said.

The $180-million deal with Air Canada was called off last month. Had it gone through, Transat shareholders choosing to be paid in Air Canada stock would have received an investment worth $6.99 a share based on Air Canada’s closing share price of $24.43 Thursday.

Cameron Doerksen, an analyst at National Bank of Canada, has said he’s doubtful another offer will materialize at $5 a share. Transat faces several problems, he said, including a high rate of cash expenses, which will nudge leverage higher, and international travel restrictions that are not expected to be lifted soon.

Transat has not flown since the end of January and halted flights for four months in 2020 because of the pandemic. This week the company extended the suspension of flights until July 29. It has laid off as much as 85 per cent of its work force, deferred aircraft lease repayments and accelerated the retirement of several planes. It lost $497-million in 2020.

The Canadian government announced a bailout for Transat last month worth as much as $700-million, including loan facilities worth $390-million to fund operations and another $310-million to cover refunds for cancelled flights. Transat will issue 13 million warrants to the government, giving it the right to purchase shares for $4.50 apiece to a maximum of 20 per cent of outstanding stock.

Transat employed 772 people as of April 28 and must maintain that level. In good times, the company had 5,000 employees in Canada.

Transat shares closed at $4.53 Friday on the Toronto Stock Exchange, up 5.10 per cent from the previous day’s close. 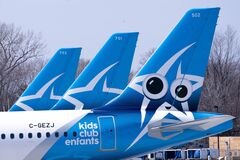 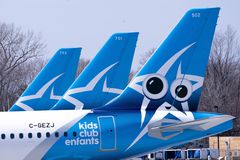 How to apply for a refund from Transat for a cancelled or changed flight
Subscriber content
April 29, 2021 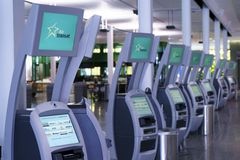