For an avowed fiscal hawk like Peter Bethlenfalvy, it’s hard being thrust onto centre stage in the midst of a global pandemic.

The 60-year-old former financial executive came into politics determined to reduce Ontario’s persistent deficits by curbing its spending. His convictions are rooted in the importance of fiscal responsibility and balanced budgets. He was given control of the province’s purse strings, as Treasury Board president, almost as soon as he was first elected as MPP for Pickering-Uxbridge in mid-2018.

In the past year, however, Ontario’s Progressive Conservative government has had no choice but to take on massive amounts of new debt to fund its response to the coronavirus pandemic. On Mr. Bethlenfalvy’s watch, the province’s projected deficit has ballooned from $6-billion to $38.5-billion this year, mostly because of surging costs for health care and an array of support programs introduced to help families and businesses suffering under onerous lockdown rules.

Two and a half years after taking his first cabinet post, Mr. Bethlenfalvy was abruptly appointed as Finance Minister on New Year’s Eve when predecessor Rod Phillips resigned in scandal over a Caribbean vacation. Mr. Bethlenfalvy also kept his role at the helm of Treasury Board, which makes him almost singularly responsible for figuring out how the government plans to spur an economic rebound.

“While long-term these deficits are neither sustainable nor desirable, they are necessary,” he said in a telephone interview. As for when they will need to be reined in, he answered: “One thing I do know, it’s not now.”

To succeed, he will have to sustain large support programs – such as rebates on electricity and gas, as well as grants to help businesses buy protective equipment and build e-commerce platforms – long enough to get struggling businesses and households back on their feet. But he must also be vigilant about curtailing the stimulus before the province gets overwhelmed by its debts. And that’s far from the way Mr. Bethlenfalvy would have imagined starting this job.

“I think any predisposed ideas he had coming in would be subordinated to the reality of the cards he’s been dealt,” said Blake Hutcheson, chief executive of Ontario Municipal Employees Retirement System (OMERS), who has known the minister since university.

One of the reasons Mr. Bethlenfalvy is so devoted to fiscal discipline is a Keynesian belief that “you should be squirrelling away some nuts so that you’re prepared to respond in the difficult times,” he said. He didn’t have much chance to do that, but his government is willing to “invest all the fiscal firepower we have to keep people safe.”

With a provincial budget looming this spring, he is not expected to change course sharply in the near term. So far, Mr. Bethlenfalvy has spent most of his time doing his homework. His early days as Finance Minister have been filled with high-level briefings, early planning for future priorities, and calls to seek advice from political and business leaders, including federal Finance Minister Chrystia Freeland.

“That’s kind of been the cycle. Every 24 hours, do the same,” he said. “But also we’ve got to look around the corner a little bit, and we’ve started that.”

Mr. Bethlenfalvy is still a political rookie, in relative terms, and is not considered a natural in the art of political communication. But by temperament, he should be suited to bear the weight of the huge public responsibility suddenly handed to him, according to interviews with 10 senior figures from finance and government who have known and worked with the minister.

He is curious and a quick study. He is often serious, an early bird who works long hours. At meetings, he is the one whose papers are marked with all sorts of annotations before he arrives, and is often the first to ask a tough question. And he is not easily flustered, remaining courteous even in tense moments.

He came to Queen’s Park with a pedigree bred in the senior ranks of private business, and a broad network of friends and contacts in the financial sector. For six years, he was president and chief operating officer of the New York branch of TD Securities Inc., the investment dealer owned by Toronto-Dominion Bank. He was co-president of the Canadian arm of ratings agency DBRS Ltd. through the global financial crisis of 2008-09, when DBRS downgraded Ontario’s credit rating. And more recently, he was in charge of financial regulations for Manulife Financial Corp., the country’s largest insurer.

“He understands finances, he understands debt and deficits, he understands risk management,” said former Ontario Finance Minister Janet Ecker, who got to know Mr. Bethlenfalvy when she was president of the Toronto Financial Services Alliance. “He’s not going to be easily panicked or easily dug in on either side of [the debate between], ‘we can spend money like water’ or, ‘oh my Heavens, we have to balance the budget tomorrow.’ ”

Mr. Bethlenfalvy’s interest in public life was evident years before he ran for office in the last election, according to those who know him. He was motivated by a belief that deficit spending had gone too far under the previous Liberal government. But the Montreal native, whose parents were immigrants from Hungary, also often expressed an urge to do good through public service. “Canada gave him a hand up in life and I think he feels a very strong sense of giving back,” said Victor Dodig, CEO of Canadian Imperial Bank of Commerce.

One of Mr. Bethlenfalvy’s mentors was Michael Wilson, the late federal Finance Minister who also worked as a financial sector executive. “I think probably Peter has modelled his public-private interest after [Mr. Wilson],” said Mr. Hutcheson of OMERS.

Mr. Bethlenfalvy’s dual role as Finance Minister and president of the Treasury Board gives him a rare degree of power to reshape the finances of Canada’s largest province. The first clues about how he may do that could surface in the next provincial budget, which is expected as soon as March, and was already being sketched out before Mr. Phillips resigned. “We were attached at the hip,” Mr. Bethlenfalvy said of Mr. Phillips, but there was also “a healthy discussion of all views” between Finance and Treasury Board.

“What’s different is that we’re bringing Treasury Board and Finance together so it really is an opportunity to have a seamless delivery of the significant budget that we’ll bring forward in the spring,” he said.

His government’s most urgent priority is rapidly building up the province’s infrastructure to distribute COVID-19 vaccines. And on Friday, it launched a new program providing grants of $10,000 to $20,000 to small businesses that have to restrict services or close because of a provincewide lockdown.

Behind the scenes, he has pushed an array of initiatives designed to modernize the provincial government and make it more efficient, including investments in technology and a digital economy. And he has tapped some of his contacts from the private sector to help.

Mr. Bethlenfalvy attracted former TD executive Tim Hockey to serve as special adviser to the Premier on digital transformation. And the Minister meets half a dozen times annually with a committee of senior business leaders who serve as a sounding board for setting the government’s priorities.

“He’s got great business acumen, and he really wants to run the government like a business,” said Colleen Johnston, a member of the committee who was formerly TD’s chief financial officer and head of technology. But that approach has limits, especially in a crisis. “I don’t think you can go into the public sector like a bull in a china shop, and he understands that.” 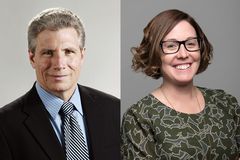