The cause: Tim Hortons Foundation Camps

When Graham Oliver was a teenager he had the thankless job of working in the kitchen of a Tim Hortons summer camp in Parry Sound, Ont.

He still recalls the gruelling 10-hour days serving campers meal after meal, but he also hasn’t forgotten how much the children benefited from the outdoor experience.

“I always remember from day one day to day 10, just the transformation of the kids when they come to camp,” said Mr. Oliver. “I worked in the kitchen so I saw things from the outside looking in but that always stuck with me.”

Mr. Oliver, 56, also worked part-time at a Tim Hortons restaurant during high school and he dreamed of becoming a teacher. But after running out of money in university he returned to Tims and he now owns 10 outlets around Kitchener, Ont.

He’s also kept up a connection to the camp program. In 2017, he hiked up Mount Kilimanjaro in Africa with a group of restaurant owners and raised $700,000 for the Tim Hortons Foundation Camps. The group planned another fundraising trek this year, to the base camp at Mount Everest, but the adventure had to be postponed because of the pandemic.

This week, Mr. Oliver joined other restaurant owners across Canada in a one-day fundraising event on July 21 called Camp Day. The final tally won’t be known for a couple of weeks but the annual fundraiser has generated $212-million over the past 30 years for the foundation.

The company has been running summer camps for underprivileged children since 1974 and today it operates seven camps in Canada and the United States as well as a school program. Along with raising money, Mr. Oliver is also the volunteer president of the foundation. “I love hearing the stories about what camp meant to people,” he said.

The summer programs have been restricted because of the pandemic, but Mr. Oliver hopes children will be back outside soon. “Once we get kids back in camp I can’t wait to get on site again just to see all the activity,” he said. 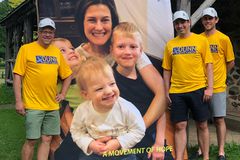 Pitching in: Couple taking reconciliation to heart with donation for health centre
July 2, 2021 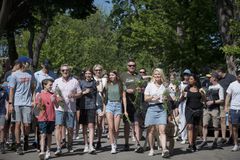