Canada’s biggest eastern port has ground to a near-halt for the second time in less than a year after dock workers walked off the job early Monday, further raising tensions ahead of possible intervention by the federal government in the days to come.

The Port of Montreal’s container terminals and dry bulk operations are shut down because of the general strike by about 1,125 workers affiliated with the Canadian Union of Public Employees, port spokeswoman Mélanie Nadeau said in an e-mail. The site’s liquid bulk handling, grain terminal and Oceanex service are not affected, she said.

Filomena Tassi, Canada’s Labour Minister, said Sunday on Twitter that the government has filed notice that it will table back-to-work legislation if an agreement is not reached between the workers and their employer. The earliest such a law can be introduced is Tuesday morning but there is no obligation for the minister to do so, said Lars Wessman, spokesman for the minister.

Ms. Tassi said such a notice is the Trudeau government’s least favoured option, adding it believes in the collective bargaining process. But after more than two years of negotiations, including more than 100 sessions brokered by federal mediators, the two sides remain “far apart” at a critical moment for the country, she said.

“The current work stoppage at the port is causing significant and potentially long-lasting harm to Canada’s economy, and is adding stress to supply chains already under significant strain due to COVID-19,” Ms. Tassi said. “The government must act when all other efforts have been exhausted.”'

Union leaders and representatives from the Maritime Employers Association, which represents ship owners and operators, were summoned to talks Monday, Mr. Wessman said. He said it would be fair to characterize the meeting as a last-ditch effort to win a deal.

Business leaders have been vocal in calling for Ottawa to act to broker a deal and end the labour conflict, either through binding arbitration or a special law. Others, including Alexandre Boulerice, deputy leader of the NDP, counter that even the threat of federal legislation undermines the union’s chances of negotiating a fair deal for workers.

The last major work stoppage at the Port of Montreal was last summer, when dock employees staged an 11-day strike as well as eight days of rotating strikes in July and August. Backlogs and delays caused by those work stoppages cost wholesalers $600-million in sales over the two-month period, according to Statistics Canada data. In all, 21 container ships were diverted to competing ports, and merchandise in about 80,000 20-foot containers was either grounded or rerouted.

Relations between management and the union have been strained since the end in late March of a seven-month truce allowing for negotiations to take place. Workers overwhelmingly rejected the employer’s latest contract offer.

Dock workers earlier this month triggered what they called a partial walkout, declining to work overtime and on weekends when ships are typically unloaded and reloaded. The slowdown came after the Employers Association told the workers that because of declining cargo volumes at the port in recent months related to the labour uncertainty, the group will no longer pay them for hours not worked. The workers had guaranteed revenue provisions in their expired labour contract.

A strike comes at a bad time for importers and exporters, who are already dealing with supply-chain disruptions caused by factory closings under government lockdown orders and a global shortage of shipping-container capacity as demand builds for consumer goods and other products. Many companies have already been diverting their Montreal-bound cargo to other ports, such as Halifax.

Montreal’s port handled just under 35 million tonnes of goods and commodities last year, many of them shipped to densely populated areas in Ontario and the U.S. Midwest. Its biggest-volume containerized cargoes include food, forest products and metallurgical products. 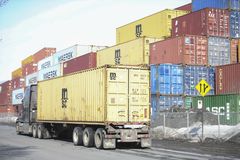 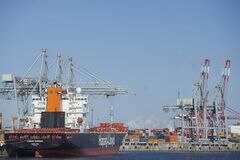 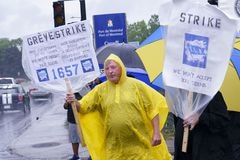