His comment came after the Toronto-based company, which owns the National Post and other daily newspapers as well as other print and digital publications, reported a $15.5 million net loss in its third quarter ended May 31.

Postmedia’s overall revenue fell to $171 million, down 10 per cent from a year earlier, reflecting a years-long, industry-wide shift in readership and advertising to digital forms of content through social media and the internet.

Print advertising revenue accounted for most of the decline, dropping by $14.8 million or 16 per cent, while print circulation revenue fell by $4.5 million or nearly eight per cent. Digital revenue rose about $2 million to $29.9 million.

Godfrey said in a statement ahead of a quarterly conference call that Postmedia must “take the necessary steps to focus on areas where we can win and make the tough, yet decisive, decisions about where we need to make changes.”

Cost-reduction initiatives that were implemented in the third quarter will result in $7 million in net annualized savings, Godfrey said on the call.

He noted that Postmedia also plans to cut its compensation expense structure by 10 per cent by the end of the fourth quarter, which ends Aug. 31, through voluntary departures and layoffs.

The company said June 26 that it will stop printing daily newspapers in Portage la Prairie, Man., Kirkland Lake, Ont., and Pembroke, Ont., but will have a digital presence in the three communities.

An earlier deal last November, in which Torstar Corp. and Postmedia exchanged a total of 41 publications, mostly in Ontario, resulted in the closure of most of them.

This year’s third-quarter loss also included a $9.4 million impairment charge, which was more than twice as large as the $4.2 million recorded in last year’s third quarter.

Excluding impairment charges, other non-cash expenses and restructuring charges, Postmedia’s operating expenses were down $15.9 million or 9.3 per cent in compared with last year – or $13 million if an Ontario tax credit is excluded.

Postmedia chief operating officer Andrew MacLeod said during the conference call that the company isn’t abandoning its print business because it “has an important role in building brands, and awareness, and in bringing people together.”

“But the nature of what people come to us for has changed,” MacLeod said. “That necessitates our people adapting to the radical change we face in engaging the new strategies under way.”

He said in an interview after the call that part of Postmedia’s multi-prong digital strategy is to co-exist with Google and Facebook by going to advertisers as experts in combining advertising, internet search and social media campaigns.

More fundamentally, MacLeod added, Postmedia is looking for ways to “make more money” from the audiences it has created by providing more specific reader information so advertisers “can target the right audience, with the right message at the right time.”

He added that Postmedia might hire outside writers to produce “sponsored content” if an advertiser shows interest “but it would never be one of our journalists.”

“To be crystal clear, and totally unambiguous, editorial determines what to cover and how to cover it. And that is not driven through a commercial lens, whatsoever,” MacLeod said.

In early 2016, MacLeod announced an unusual strategic collaboration with Mogo Finance Technology – a digital financial brand – the traded at least $50 million of “media value” over three years for a share of Mogo’s revenue and the opportunity for Postmedia to buy equity in Mogo.

That agreement – which was extended in May 2018 by two years – has been a model for other Postmedia deals including with the Indochino clothing chain. 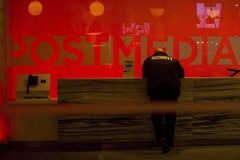