Half a decade into Prem Watsa’s transformation of one of Canada’s largest restaurant chain owners, Recipe Unlimited Corp.'s turnaround is sputtering.

The company, originally called Cara Operations Ltd., was acquired by Mr. Watsa’s Fairfax Financial Holdings Ltd. in 2013 and combined with Prime Restaurants, which he already controlled, to create a single owner for restaurant chains such as Swiss Chalet and East Side Mario’s. The plan was to slash costs, all while acquiring more chains to add scale.

Over the past six years, Recipe hired a star chief executive to shepherd the turnaround, went public and acquired multiple reputable chains – including St-Hubert and The Keg.

But lately, the company has hit a wall. Recipe’s most recent earnings, released last month, showed the fourth consecutive quarter of negative same-restaurant sales growth – a key metric in the retail industry. The company’s share price took a precipitous hit, and the stock closed at $19.17 on Friday – down 17 per cent from its initial public offering.

Salvaging the turnaround is now the sole responsibility of CEO Frank Hennessey, who joined in 2018 after running Imvescor Restaurant Group Inc., which owned chains including Baton Rouge and Pizza Delight. Earlier this month, Recipe announced the retirement of executive chairman and former CEO Bill Gregson.

Mr. Hennessey is candid about the company’s predicament. “The third quarter was disappointing for us at Recipe,” he said on a conference call. “It is clear that the industry, in particular, the full-service restaurant industry in Canada, is in a challenging environment.

“In 2019, we have seen softening of guest traffic in most geographies and across most of our brands, with the exception of Quebec,” he added. Roughly 55 per cent of Recipe’s network is in Ontario, and year-to-date the company has seen a 2.2-per-cent drop in same-restaurant sales countrywide.

It’s quite a change from the early days of the transformation. When Cara and Prime merged, Fairfax named retail turnaround star Mr. Gregson as the company’s CEO and showered him with stock options, suggesting he’d make magic. (Mr. Watsa seems to believe in star CEOs, having also paid John Chen at BlackBerry Ltd. lavishly.)

Eighteen months later, Recipe went public on the Toronto Stock Exchange at $23 a share and over its first seven months of trading the stock jumped 59 per cent. Mr. Watsa controls the publicly traded company through multiple voting shares.

To keep investors interested after the IPO, Recipe tried to consolidate much of the industry. In 2016, the company acquired Quebec rotisserie chicken chain St-Hubert Group for $537-million, giving it a total of 1,127 restaurants under its belt. Only Tim Hortons owner Restaurant Brands International Inc. and McDonald’s Corp. had a larger market share – but both are in the quick-service category.

Yet, even after other acquisitions of chains such as Original Joe’s Franchise Group and Pickle Barrel, Recipe struggled to gather sales momentum in existing restaurants, triggering fears that it was simply buying growth. Some overarching worries from analysts were that younger demographics simply didn’t care for casual restaurants, that declining traffic could hurt beverage sales and that minimum wage hikes in some provinces would lead to higher menu prices.

As the fears mounted, management tried to keep up with industry-wide disruption by partnering with delivery services such as UberEats, Just Eat and Skip the Dishes, which are popular with younger customers. But nothing moved the dial, so in January, 2018, Mr. Watsa merged another of his restaurant holdings, Keg Restaurants Ltd., into Recipe, adding more than 100 steakhouses in Canada and the United States. Crucially, The Keg’s same-restaurant sales had been climbing.

But even that deal wasn’t enough. The temporary sales gains Recipe experienced in 2018 were short lived. The problems grew from there.

“Many of Recipe’s banners, such as Harvey’s and Swiss Chalet, are mature concepts," BMO Nesbitt Burns analyst Peter Sklar wrote in a note to clients last month. “Menu prices have increased as labour is generally tight and this has compounded the wage pressures resulting from minimum wage increases. We also believe food delivery services are cannibalizing in-restaurant sales and pressure same restaurant sales."

Many rivals face the same trends – Boston Pizza reported negative 4.2 per cent same-restaurants sales growth last quarter – but it’s up to Mr. Hennessey to plot a way forward now that Mr. Gregson is retiring and cashing out. In September, he sold all of the shares he acquired from exercising his first tranche of options, pocketing $25.8-million. His second tranche remains unexercised, but is worth another $25.8-million based on Friday’s closing price.

To complete the turnaround originally envisioned, Mr. Hennessey will have to fix Recipe’s core business. Casual dining can be reinvigorated, CIBC World Markets analyst John Zamparo wrote in a note to clients last month, "but to achieve this, brands must offer some combination of unique menu items, more compelling value, loyalty programs or faster service.”

Some analysts believe more acquisitions are necessary as well. “We believe the key catalysts for Recipe going forward will include complementary acquisitions,” RBC Dominion Securities analyst Sabahat Khan wrote in a recent note to clients, "which increase the company’s exposure to under-penetrated geographies and segments within the restaurant market.” 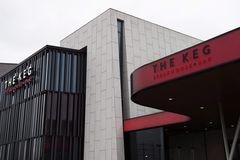