The price of Canadian heavy oil has hit a 10-year low compared with benchmark North American crude as a shortage of pipeline capacity and refinery maintenance have combined to cause a growing glut of crude in Alberta.

Lack of space on pipelines to transport the product will dog the industry, at least until Enbridge Inc. can complete its Line 3 replacement project in late 2019, analysts said on Friday. The steep discounts could ease later this fall as planned maintenance at U.S. refineries comes to an end. Expanding rail capacity will also help relieve the bottlenecks.

In trading on Friday, Western Canadian Select (WCS) was priced US$45 a barrel less than West Texas Intermediate (WTI), which climbed to US$74.33, according to Net Energy, an oil trading firm. That is the steepest discount for WCS since late 2007, and left the Canadian heavy crude valued at US$30, or the equivalent of $39 a barrel.

Canadian producers are in fact facing a “double discount” relative to world oil prices, as the price difference between WTI and Brent International has widened to US$10 a barrel. WTI prices have risen nearly US$10 since Sept. 11, but have not kept pace with Brent, which closed at US$84.40 on Friday. WTI is priced in Cushing, Okla., which is being flooded with crude from West Texas while new pipelines are being built across the state to the Gulf Coast.

Canadian heavy oil typically sells at about $15 less than WTI, reflecting the lower quality of the crude and the fact it must be transported farther to reach refiners. But the shortage of pipeline space has widened that discount. Producers of light oil and synthetic crude are also facing price weakness relative to U.S. competitors.

The price of Brent – the global benchmark – is driven by fears that U.S. sanctions on Iran could take up to two million barrels a day of crude off the market with little short-term capacity in Saudi Arabia or elsewhere to fill the gap. U.S. President Donald Trump has demanded members of the Organization of the Petroleum Exporting Countries (OPEC) pump more crude, but the cartel has little extra.

“There simply isn’t enough pipeline or rail shipment capacity to get all the Canadian crude to market, leaving Canadian producers unable to take advantage of higher prices and increased demand in the United States as its economy continues to grow,” Andrew Botterill, a Calgary-based partner in Deloitte LLP, said in a report.

On top of that chronic problem is the acute pain of a heavier-than-usual refinery maintenance period in the Midwest, the key market for Western Canadian producers.

Five of the top 10 U.S. refiners of Canadian crude have maintenance scheduled over the next six months. They include BP PLC’s plant in Whiting, Ind., Exxon Mobil Corp.’s facility in Joliet, Ill. and Marathon Petroleum Corp.’s refinery in Detroit. The outage could total 400,000 barrels a day, according to Samir Kayande, director with RS Energy Group of Houston.

“When you’re physically very tight, small changes in that physical supply can have an out-sized impact on prices,” Mr. Kayande said. “You could get $10 or $15 moves based on relatively small changes. It’s chaotic.”

For the transportation bottleneck to disappear, Canadian producers need the Enbridge project concluded, as well as completion of the Keystone XL pipeline or the Trans Mountain expansion. TransCanada Corp. is pursuing a final investment decision on Keystone, but is awaiting the results of a court challenge to Nebraska’s route approval.

The federal government is working to restart construction of the Trans Mountain project, which was halted when the Federal Court of Appeal quashed Ottawa’s approval for it.

The Liberal government has given the National Energy Board 22 weeks to reconsider the effects of increased marine traffic on the environment, including the habitat of endangered killer-whale populations. Natural Resources Minister Amarjeet Sohi this week announced that consultations with First Nations will be reopened, led by former Supreme Court of Canada justice Frank Iacobucci. That process has no deadline, but Mr. Sohi said it should be “focused and efficient,” echoing the federal court decision. 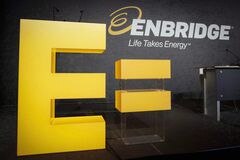